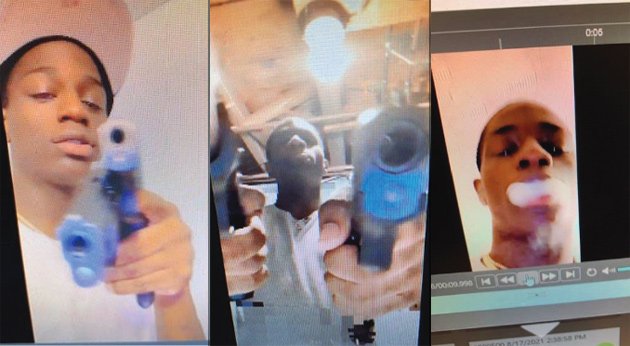 Gun waving and pot smoking on Snapchat; from the affidavit.

An alleged Heath Street gang member whom ATF agents say they captured on Snapchat waving guns around and exhaling marijuana smoke now faces a federal charge of being a drug user in possession of a firearm and ammunition, the US Attorney's office reports.

Although marijuana is no longer illegal to smoke under state law, it is under federal law. The federal charge, filed against Dumari Shakur Scarlett-Dixon, 20, last month, is on top of charges he already faces in three different local courts for unlawful possession of a firearm, in a 2018 case in Suffolk County juvenile court, cases in 2019 and March, 2021 in Roxbury District Court and a case in February, 2021 in Dorchester District Court, according to an affidavit by an ATF agent who worked on his case.

As a condition for release on all the state charges, Scarlett-Dixon was required to move away from the Heath Street area and in with his grandmother in Weymouth, where he was arrested Nov. 30, after an investigation in which ATF agents monitored his Snapchat feed, on which they say he posted videos of himself posing with and shaking semi-automatic guns, as well as "numerous videos of himself smoking what appears to be marijuana."

Armed with a search warrant, the affidavit continues, agents raided his grandmother's home on Sept. 24, after first stopping Scarlett-Dixon when he drove away from the house that day:

At a hearing yesterday, a US District Court magistrate judge ordered Scarlett-Dixon held pending a hearing on Dec. 21.

Can there be any other explanation ?

Are people today so stupid that they really think being a "tough" guy on social media, waving guns around, won't come back to bite them? This type of stuff doesn't even make you look cool, it makes you look insecure with your masculinity. The human species is too stupid to be alive.

Well, at least he's not posing with assault weapons

for his Xmas card. You would have to be insane to do that.

Can't wait until weed is legal

If it wasn’t for the federal ban on weed

Why is he even out on the streets to begin with?

OMG ILLEGAL WEED TAKES GUNS OFF OF THE STREET!

Note that when white people do this sort of stuff, they get elected to congress from shithole places.

Federal decriminalization of pot possession would not have made his firearm possession legal, nor would it have legitimized his alleged involvement in an organized crime outfit.

I had a friend who was on the

I had a friend who was on the Federal grand jury in her area. I asked her how people got caught for their alleged crimes: she said "it's mostly people not doing themselves any favors" and posting media of themselves doing illegal stuff on social media.

So, I guess for anyone who needs to be told this, the cops have the Internet too and they know how it works.

Reminds me of something I wondered about. Those reality TV shows that feature people doing illegal things like street racing, moonshining, hunting ginseng on public lands - while acknowledging they're breaking the law - why are those people not being prosecuted? Doesn't ignoring their crimes encourage lawbreaking?

Despite the world reality being in the title, I very much doubt they are doing illegal things on camera for a tv episode. If anything it’s staged to seem like it would be an illegal thing if it were done in public off camera

To quote my grandmother: "What the hell?! You stuck on "stupid" or something?!?"

So far this child has only

So far this child has only broken laws and not directly harmed anyone yet other than himself.
He will end up in prison and people will tsktsk and say he made bad choices.
Being mocked on the internet is probably not what he was aiming for.

Yeah, we are all better than him. So what?