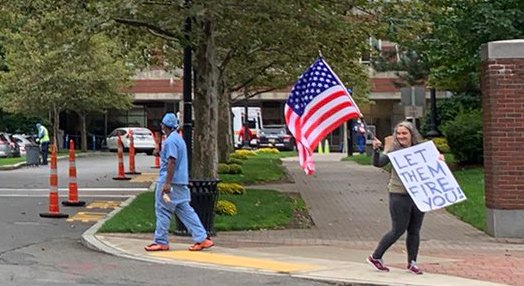 The scene, such as it was, on Harrison Avenue. Photo by Justin de Benedictis-Kessner.

A tiny group of protesters mad about vaccine mandates paraded on Harrison Avenue outside Boston Medical Center this afternoon, yelling repurposed slogans such as "My body, my choice!" and vainly trying to convince BMC workers to refuse to get a shot.

Justin de Benedictis-Kessner took the above photo from Blunch, adds:

Can confirm that Blunch was bustling with more happy customers than there were protestors. Thanks to Nikki + team for feeding the hard-working and vaccinated staff of BMC.

Yes, it's small but extremely obnoxious. Scary how one of the organizers has her young kids with her.

De Benedictis-Kessner adds one of the protesters attempted a little bullhorn diplomacy with passersby:

She was yelling at passerby who pointed at her ridiculous sign, saying to them “oh you think rape is funny?”

The protest sparked several 311 complaints including:

Vaccine protesters are disrupting businesses at this intersection and spreading dangerous misinformation over bullhorns.

Anti vaccine protesters are making a racket. I don't agree with their message, and I respect their right to do it, but they're being unnecessarily loud, using bullhorns turned up to 11, and there's no need to broadcast their message into the neighborhood where people are trying to work from home. BPD quieted them down earlier, but they resumed as soon as the police left.

The 311 complaints were all promptly marked "closed" with a note to call 911 instead.

If forced vaccination is rape…

…I know I shouldn’t bother engaging in such a demented idea, but I’m gonna take the bait anyway…

If forced vaccination is rape*, and if any of these people are parents who had any of their children vaccinated as babies/toddlers before these children were old enough to give consent, then that means that they are broadcasting to the world that they are complicit with their own children’s “rape”.

(*just to be clear, we know forced vaccination isn’t rape.)

I might actually agree, somewhat, if anyone was being dragged off the street and held against the ground while a needle was inserted against their will.

But "You need to be vaccinated to work here or attend this event" is no more forced than snooty restaurants requiring patrons to wear a jacket.

Are they forced to have a license?

You need a license for many types of medical work. Is that also "being forced"? Or is it just a requirement for having a job in the field?

Yes wearing a jacket or

Yes wearing a jacket or having a license is equal to being injected.

I don't know what the proper analogy is, I don't think rape is it, but certainly non-consensual vaccination is problematic.

HOWEVER that's not what is happening here. No one is being FORCED to do anything. Employees are being given a choice to accept a public heath (and workplace safety) measure, or find employment elsewhere.

Calling it forced, and then calling it rape, is a strawman position to take.

and what about genital mutilation?

Didn't BMC require employees to be vaccinated months ago?

Most of the area universities (minus BC) required it starting Sept 1st.

As an aside, remember when some people where outraged at the thought some healthy young people might be "cutting in line" by offering to drive elderly to vaccination clinics for free? Those where good days.

And BC has required that students, faculty and staff get the vax

BUMC is owned by BU

BC doesn't have a medical or dental school.

We do have to tolerate this in the name of freedom

Yes, they have the right to protest. The fact that there are very few of them and that others are giving them a hard time suggests that the system is working.

Forced vaccination is what?

Hospitals used to be a quiet Zone. To bad the bullhorn couldn't be taken away.

I can't believe they're really trying to use that argument. If they're "trying to convince BMC workers to refuse to get a shot," the issue of "choice" goes out the window. "Choice" is code for "don't get the vaccine," as opposed to "I've made my choice not to, but you have your own choice to make." It has nothing to do with mandates - it is pure anti-vax trumpist bullcrap.

Also, of course, it's a double standard when compared to issues like abortion, etc.

Also, of course, it's a double standard when compared to issues like abortion, etc.

Nah. It's entirely consistent: both are examples of "your body, my choice", no matter what words they use.

One involves doing harm to other people who are independently alive.

lol all the hospitals were

lol all the hospitals were doing vaccinations of staff back in like JANUARY. kind of late to be rolling up begging people not to do it. At this point the vast majority of medical staff is looking at boosters, not first round shots.

kind of late to be rolling up begging people not to do it.

It's performative, seeking after fifteen minutes of fame despite the fact that being famous for showing your ass is not something you ought to aspire to. Covidiots are like that: stupid, selfish, obnoxious, spit-spraying dumbasses.

They must be on their world tour

Today, they were in Tech Square in Cambridge, in front of the Moderna headquarters, where I'm sure they got a very warm welcome.

...I'd look the other way while employees mooned these idiots through the plate glass windows.

Boston's scariest Halloween decorations under his eye
South End to get first archaeological dig, at Massachusetts Avenue townhouse that might have been a station on the underground railroad
Boston to keep several street changes originally made for the Orange Line shutdown
Giving a hoot about the South End
Man standing in the middle of Washington Street in the South End objects to being asked to move, so hurls a full can of beer at T bus driver's window
Two councilors say part of the answer to Mass and Cass might be locking people up for treatment whether they want it or not