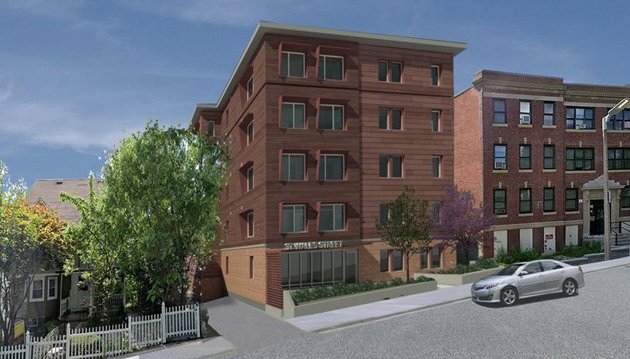 Board says: No way.

The Zoning Board of Appeal today rejected a proposal by the non-profit Heading Home to replace a crumbling 10-unit apartment building at 37 Wales St. in Dorchester with 23 new apartments rented to families trying to get out of homelessness.

Heading Home had proposed a building with no parking spaces for residents; the current building has ten. "Most clients don't have cars," Heading Home CEO Danielle Ferrier told the board. Residents would be "transitioning out of homelessness" and allowed to earn no more than 30% of the Boston-area median income.

But that stuck in the craw of neighbors, who said they didn't believe the new residents wouldn't promptly fill up the already parking-short Wales Street with cars.

In addressing Heading Home, board Chairwoman Christine Araujo only cited the parking in calling on the group to try to work out the issue with neighbors: "Obviously, there are issues that should be addressed," she said.

Board member Mark Erlich agreed that "10 to 23 is a big jump" and moved to reject the proposal - which the BPDA board had approved in January - without prejudice. The board then voted 6-1 for that - which means Heading Home can file new plans in less than a year.

Video of the hearing:

...aka 'We don't want those sorts of people around here.'

Excellent proof that Boston drivers are selfish and classist. They would rather someone die on the streets than take up one of “their” parking spaces.

Let them know what you think. https://www.linkedin.com/in/christine-araujo-64060311

It's always amazing that the Zoning Board goes along with this

We all realize that "parking concerns" is just "we don't want these people around here", but it's still incredible to me that the Zoning Board is willing to let "we value people's ability to store private property on public land over the well-being of our citizens" be the go-to excuse for this.

Shame on the greedy neighbors who want...

... hoard all the free on street parking for themselves. Some of them probably even have driveways and garages but are too lazy to use them. I say eliminate all on street parking on Wales Street and widen the sidewalks.
Best of luck to Heading Home when refiling the plans. Boston needs more development like this.

who cares about the homeless

Like always, the anti-car league is angry that residents don’t want something in THEIR neighborhood. Hahaha! Y’all are too funny.

OK! This is the opportunity

OK! This is the opportunity to put this, say, on Pondside in JP? Because obviously this would be a pure delight with no problems for the neighbors who have, presumably, set down some kind of roots in the area that they call home. But it's Dorchester, so why shouldn't they want just whatever on their street. Every one of you should be begging to have this on your street.

I mean, obviously parking is a ruse.

I'm happy to donate all the land I own in the city of Boston to this goal.

That said, I don't think the fact that I don't own any land in the city of Boston should preclude me or anyone else from having a voice on this. Unless we're declaring that only the wealthy get to decide what gets built (well, at least, declare it more openly than we already are, that is).

Jamaica Plain has a ton of

Jamaica Plain has a ton of housing for the needy. Try again.

The things that are yours end

The things that are yours end at your property line.

Defend zoning laws to me again, because they're precisely how we ended up with this smokescreen cudgel of abuse that will keep the homeless homeless.

Actually, it’s an increase of 13 housing units for families that, unlike yourself, have NO PLACE TO LIVE.

Of course, we know of the insider trading that has taken place with luxury housing in this city and the Zoning Board of Appeal.

Remind me. How many homeless

Remind me. How many homeless people have cars again?

More than you think - not all are street people

that homeless people don’t have cars. Restricting car ownership and parking, in the city, is some people’s way of restricting the lower class and working people. A new form of bigotry and convince me it’s not.

I'll admit, I'm lucky enough to not have been in that situation

but were I homeless with a car, I'd take somewhere to live (and have to figure out parking myself) over having easy parking but no home.

And regardless, parking spaces are public property. If you want a parking space allocated to your specific property, you should buy or rent a place that has its own private parking area.

It’s not that simple

What if that individual relies on their vehicle to get to work?

Then they need a private spot

Or they need to stop hoarding publicly owned resources.

Then they'll find somewhere to park their car

...the same way the rest of us do. I guess it's possible you could construct a scenario where there's a homeless person who needs a car for their job and also needs to be able to park that car directly in front of wherever they live etc, but that seems rare enough to me to not be something to make larger construction decisions around (and in any case, seems like a problem that would be better solved by adding handicapped spaces to the street, rather than refusing to build homeless shelters that don't have parking spaces).

They don't have residential parking signs.

But that flooding thing could be a big deal.

Although with the salvation army site there, I don't you can claim the resident's are afraid of those people.

Why would they need them there anyhow?

They don't have residential parking signs.

If one looks at each past street view going back to 2007, it looks like they don't need them there either. There are plenty of on street spaces there already, even if every apartment in the proposed building had one car. Looks like a huge red herring.

surely that's a problem that could have been fixed during construction, but now won't be.

How does that apply if this is built? I see no large bodies of water around and it looks like it's in the middle of a hill.