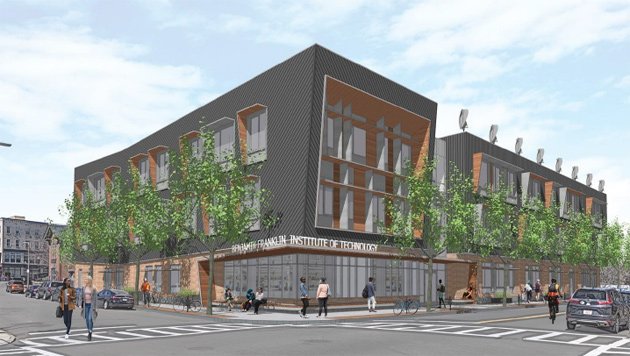 The Benjamin Franklin Institute of Technology yesterday filed detailed plans for its proposed campus on Harrison Avenue, near Melnea Cass Boulevard, in Roxbury.

In a filing with the BPDA, the institute, which provides degrees in various technical fields, says it will build a three-story, 68,000-square-foot building that will let it continue to "fulfill its mission in an appropriately designed and located facility" - using money from the sale of its current home on Berkeley Street in the South End.

Selling its South End home will also bolster the endowment at the school, which was started with money that Ben Franklin left in his will, and which was later bolstered with additional money from Andrew Carnegie. In its new home, the school hopes to grow its enrollment from 400 to 600.

Most of the student body (57%) are first generation college students, some are the first in their families to graduate from high school, and almost half are from immigrant families where English is not the primary home language. BFIT is committed to the academic success and career readiness of its students in a variety of technical fields, with a hands-on, experiential learning approach. Student success for BFIT’s student body requires a ‘high-touch’ approach: small class sizes; a substantial number of staff providing tutoring, counseling and other forms of student support; career preparation; and the opportunity to be known by everyone from the college President to the security guard.

Related Beal is buying the Berkeley Street building and has filed plans for a senior-care facility and office space there.

The new building would be smaller than the Berkeley Street one, built in the early 1900s, but the school says it would be far better laid out for the technical programs it offers. It will be topped with a "learning lab" on the roof for HVAC, renewable energy and electrical classes.

Automotive Labs, which include Hybrid and Driverless Car Labs, will be located on the first floor to accommodate cars and large rolling toolboxes. Vehicular access to the Automotive Labs and for service delivery will be from Eustis Street.

Once completed, on the site of the former Harrison Supply Co. site at 1011 Harrison Ave., the new building could be part of a series of new buildings forming a gateway to Nubian Square from Melnea Cass Boulevard.

I thought they were moving to Dorchester, but I think this is a better location.

Colleges and universities are scrambling for students, some are shutting down or merging, sure let's build a new building...

I think you are making a rather broad generalization here and therefore drawing a silly conclusion.

That they sold their old building for a nice sum and this building replaces the old one? Not to mention that this is quite a different higher learning institution than the others in the area. Your comment is uninformed.

Spot on. I've worked with

Spot on. I've worked with BFIT for many, many years and the work they do is unlike almost anything else around the area. That was a terribly ignorant statement. Good job, Bob.

Sure, let's play a financing shell game with a new facility

...did you miss a few accounting classes at your college?

That's some data all right, but none of these stats say anything about the ability of the school to get money from students while they're attending school. Unless you're implying that the school is for some reason issuing their own loans or is somehow totally dependent on money coming from the salaries of people who have already graduated...

Of course BFIT gets money from students

And those students and their families will incur significant debt for the privilege, while working in relatively low paying jobs, not uncommon in proprietary schools (although BFIT would deny being such).

Oh, and since you apparently missed every one of your reading comprehension classes, they aren't paying for this capital investment with tuition dollars.

Maybe so but that debt isn't to BFIT. Do you know how student loans work? You get money from a bank, you give it to the school. If people default on their loans or can't get a job after graduation, the bank goes after them, not the school.

they aren't paying for this capital investment with tuition dollars.

So then why are you bringing up how many students default on their loans? I'm not really clear on the point you're making with these numbers.

Many not there for 4 year degrees

A lot of students go there for certificate programs and associate degrees.It's a very good option for kids who do best with hands-on education, many of whom don't do well in traditional classroom settings.

Unlike the liberal arts

Unlike the liberal arts colleges that have been shutting down left and right, BFIT is a technical college that teaches skills that are extremely relevant in today's job market. My engineering department hires loads of BFIT grads for entry level technician jobs all the time. We would be devastated if BFIT were to shut down, as they are a valuable source of new workers for us.

That's good to hear. I worked

That's good to hear. I worked there in an administrative role years ago, and it always seemed like they were doing good work in vocational education, for students who (in a lot of cases) didn't have a lot of other good options.

Yeah I've hired a few BFIT grads in my time. Great people come out of that place.

BFIT isn't scammy like DeVry or University of Phoenix. They provide real hands on learning and you walk out with the skills you need.

And unlike DeVry or UoP.. when you see BFIT on a resume, it sets them apart from the rest.

They are a vocational school dedicated to local students

getting jobs. My friend from HP graduated from there and is working his way up the ladder. Just got hired at MGH. This is a good thing. Also I own property in Roxbury so I am happy to see it in the neighborhood.

MGH/Partners love BFIT grads.. they hire so many of them.

They rejected a merger with Wentworth

not too long ago