Board approves senior housing next to Jamaica Plain brewery, whose owner worries whether he'll be able to stay open 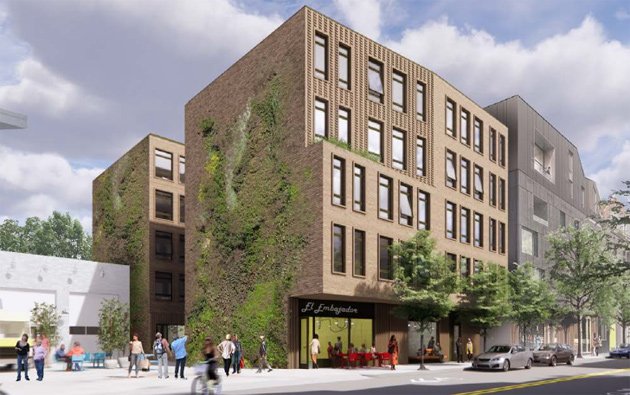 The Zoning Board of Appeal today approved a proposal by the Jamaica Plain Neighborhood Development Corp. for a 39-unit apartment building for senior citizens at 3371 Washington St. in Jamaica Plain, next to Turtle Swamp Brewing.

All of the units would have one bedroom and would be rented to seniors making no more than 60% of the Boston area median income - with a third of the units rented to people making no more than 30% of that level. The building would have a live-in manager. There would be no parking, but the city would convert three on-street parking spaces on Washington Street for short-term parking, such as for drop offs and pickups.

As part of the plans, El Embajador, a restaurant now on the site, would get space in the new building, Teronda Ellis, CEO of the non-profit group, told the board.

"Parking cannot simply be ignored," he said, adding the 18-wheel trucks that now deliver supplies to his brewery currently pull up where JPNDC wants to take three spaces in front of its proposed building.

Lincecum noted that the board has approved a number of relatively large projects along that stretch of Washington Street in recent years. His landlord, Monty Gold, is currently suing the Pine Street Inn over its proposed 140-unit building across the street.

Board Chairwoman Christine Araujo seemed to take Lincecum's side at first. Noting the stereotypical example of people who move next to a pig farm and then start complaining about the farm, she asked Ellis how she would ensure that residents of the new building would not start complaining about the operation of a brewery, even if it was there first. In fact, she asked if Ellis could include language in rental agreements that would be residents acknowledge they're moving next to a brewery.

Ellis acknowledged that seniors can be vocal, but that they are also fair - and recognize they live in a city.

She said her group has built and runs numerous housing buildings next to busy commercial and public spaces, including subway stops and that in addition to housing, the group's main focus is supporting small businesses, such as El Embajador. She said she would sit down with Lincecum - again, she said - to figure out how to keep construction from impacting his business. And she pointed to JPNDC's far larger Brewery complex on Amory Street, which in normal times attracts thousands of visitors, as proof it can work to ensure both residents and commercial ventures can co-exist.

The board then voted unanimously to approve the project. Araujo urged Ellis and Lincecum to meet to figure things out.

BPDA filings on the project.

Retiring next to a brewery?

(seriously, though - this guy seems like a bit of a jackass)

Maybe he is just worried

Maybe he is just worried about is company going out of business. We all know how "great" Boston is w/ helping small businesses.

How much beer is Turtle Swamp brewing anyway?

Do they really need 18-wheelers delivering their barley and hops?

But at the same time, small restaurants don't need 18-wheelers to deliver Coca-Cola products either.

In many cases, it's not something the buyer can control. It's really up to the logistics company that the product distributor hired.

18 wheelers are delivering to multiple customers, they’re just one stop on the route.

If you bought it, a truck brought it

Maybe they can bring it on horseback or maybe a team of bike messengers or how about a drone? Seriously, how the heck do you think stuff gets from point A to point B?

A truck brought it to some point

but there's no reason that a full-sized eighteen-wheeler needs to bring it directly from the factory to my front door. We have delivery vans, smaller trucks, cars, and yes, even bicycles that can be used in busy city streets with a lot of traffic to make deliveries, as is done in many parts of the world.

Perhaps he can host bingo

Perhaps he can host bingo night at the brewery!

What's a bigger issue here, affordable housing or breweries? It's hard for the brewery but c'mon, it's a no brainer.

Affordable Housing Is A Cost To Society

Not sure why you people still don’t see it. Deed-restricted rental affordable housing
1. Enables a transfer of wealth from the public to the private non-profit sector
2. Drains public resources for private gain
3. Relies on zero to low-interest construction loans
4. Does not pay property taxes to the City of Boston
5. Receives enormous tax-breaks, and City, State and Federal subsidies (that we all indirectly pay for)
6. Finagles density bonuses (I can build more than zoning allows because I'm building affordable housing)
7. Acquires bargain-priced, once-publicly-owned land, or buys it for a song from a private landowner who needs some good will
8. Does not allow for growth and prosperity toward owning a home. Their rent goes into a big black hole that is the CDC.

Affordable housing is a cost to society. All housing should be market rate and the chips will fall where they may providing housing for all income types. For market rate housing developments, Boston's Inclusionary Development Policy is essentially a tax to developers, making housing prices in the free market what they are today.

Affordable housing done correctly, with appropriate government subsidies, can make housing cheaper. The way to increase availability of affordable housing for all is to take money from another pot (for example from the police budget), and apply it to housing. That is how subsidies are supposed to work.

Boston's IDP on the other hand makes housing more expensive. There is no government subsidy being provided, just money taken from one housing sector and given to another. It is a tax on developers, and on to the end consumer. And like all taxes it acts as a strong disincentive: in this case to the production of market rate housing. It ensures that demand for housing will never be met and the prices keep going up. This way, the city can collect ever higher property taxes every year.

Taxes are an efficient way to disincentives activities you don't like -

Tell that to the electricity

Tell that to the electricity buyers in Texas.

Non-sequitur here. Got nothing to do with one another. Concentrate on your 6th grade social studies homework and get back to us after puberty.

I have read a few articles

I have read a few articles now where the board approves the project but urges/suggests the developer to meet and work things out with aggrieved neighbor(s).

If it is approved what motivation would the developer have to make any concessions at that point?

I love Turtle Swamp, but

I gotta say, the parking argument feels like a weird argument to make here.

What's his current plan if a truck needs to make a delivery but someone's parked in one of these spaces? Surely they must have some way of dealing with that right now, right? And isn't "short-term parking for drop-offs" exactly what he's looking for, anyway?

John is actually a great guy. Really nice family. Screw you who see him as a symbol of capitalist evil rather than a person you would like if you met him.

I think the parking is a concern as he isn't in control of how trucks deliver his supplies but if the city wants to protect jobs they will figure that out.

I know Swirrls thinks that is being a jerk, but some people would like to not see their business fail and their investment of money and years lost because some politician has no concern for small business during a pandemic. There are competing interests here, yes, but he is only voicing an opinion any of us would share in his position. He's jot Jim Koch after all. He may be a PhD Biochemist and we all know around here how PhD Scientists mouth off when they should be more restrictive of their opinion, but he has a right to try and work out a way to stay in business.

Geez, way to put words in my mouth!

Believe it or not, when I said I love Turtle Swamp, I meant it. I know John, he's a nice guy, I want the business to thrive and succeed.

I'm just pointing out that as noted here, his parking explanation doesn't make a lot of sense. He's talking about losing access to a resource that a.) isn't his to begin with, b.) could currently be used by others in a way that would block him from using it anyway and c.) converting it to short-term parking wouldn't prevent his trucks from using it if needed. Combined with his earlier complaints about losing parking due to Pine Street Inn expansion, it really makes me wonder if the ultimate concern is really about deliveries vs losing customer/employee parking.

If he thinks construction needs to be delayed until after the pandemic, that's a good argument, but it's not one I see being made here.

In any case, I hope he's able to come to a satisfactory agreement with the developers here and that the future residents of this place will be able to easily walk over and grab a pint of Orange Line if they want to.

Agreed, Fungwah. John is by many accounts a nice guy, and many folks in JP wanted to see TS thrive, but as smart and nice as he may be, PHD and all, his attitude toward the JPNDC and Pine Street Inn/Community Builders projects seems devoid of any neighborly savvy. He has legitimate concerns about how construction will interfere with his business, but jeezus h christ, he's created a publicity shitstorm instead of creating more community support for his brewery. We're all in the pandemic, not just him--if he's going to be a loud voice (and a sheltered voice, hiding behind his landlord, Monty Gold's lawsuit) against senior and recovering homeless housing, he better be prepared for significant community pushback against his business.

Talk to the developers. Construction mitigation efforts are a normal part of business for these non profit developers. Work with them. As JPNDC's director said during the meeting, the organization redeveloped the whole freaking Brewery around Sam Adams' operations, they can do it with Turtle Swamp.

The Turtle Swamp owner has really showed his NIMBY instincts during all this. Not good for business. People pay attention to this stuff.