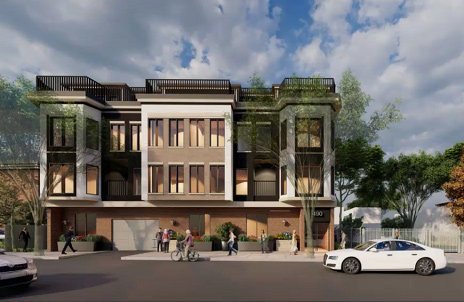 Close but no cigar, or approval.

The Zoning Board of Appeal this morning rejected a proposal to raze a one-family house at 486-490 Bennington St. and replace it with a nine-unit building, saying that even though it would be next to a credit union and across the street from a cemetery, it was simply too large.

The board denied the requested variances without prejudice in a 5-1 vote, which means developer MG2 Group can come back with revised plans within a year.

MG2 attorney Richard Lynds said the current home is actually an anomaly because there are several multi-family buildings along Saratoga Street behind the lot.

But even the normally pro-development BPDA opposed the proposal, saying overall development in East Boston might be getting out of hand as developers try to get in as much as they can before the BPDA finishes its current study of how to revise zoning in the neighborhood. "It's just getting to be too big, too dense, too fast," BPDA planner Jeff Hampton told the board.

The mayor's office supported the proposal, saying the main concern of residents seemed to be MG2's original plans for ground-floor retail space, which the developer agreed to replace with 6 parking spaces and a studio apartment. BTD also supported the proposal, saying that although the 6 spaces was too few under the lot's zoning, the site is near the Wood Island T stop.

But board member Eric Robinson, an architect, moved to reject the proposal without prejudice, calling saying it was just too dense and did not fit in very well with other buildings in the area.

And this is why

The affordable housing crisis in Boston will never end, short of politicians choosing to make the city unlivable.

The affordable housing crisis is …

… due to sky rocketing rents and lack of rent control, not because developers are being thwarted in their attempts to exploit every square in of the city.

It's one in the same

The number of people wanting to live in the city increases faster than the number of new housing units created.

Blame whoever you want but mathematically, there is no way to provide housing to everyone who wants it. Prices will get pushed up and people will be forced out until housing stock increases to match demand.

Even if developers gave the apartments away for free there still would be a sizable shortage.

Developers have a sensible fix: Make the apartments smaller so more can fit in the same footprint. But people fight that too on the basis of crowding.

No doubt, if more people come into the city and we don't add housing, the prices will go up. But that doesn't mean if we allow developers to build as many units as they want the prices will go down. At least not until we build such a ludicrous amount of units that they stop selling and owners wait out the glut long enough that they finally decide to eat the loss and sell or rent out below the amounts they wanted. Very few developers WANT to build affordable housing - they want luxury housing. (There are those that do specialize in affordable housing - but they're typically not the ones showing up before the ZBA.....EVER.)

The affordability crisis will not be resolved by relying on supply and demand arguments. That's not how the speculative housing market works. But the argument that not building anything will somehow prevent the flow of people into the city, the increased housing demand and the resulting rise in prices is totally wrong. We DO need to build more housing, we just also have to ensure that some of that housing NOW (not 50 years later when there's a glut of housing) is affordable. For every new person who moves into the city we should be making sure that an existing person is able to stay in the city they live in (if the want to) and is not displaced.

Disagree. The scale in which the supply is imbalanced is so large to make the 5-8% of units which are "affordable" just a drop in the bucket. It helps a tiny number of lottery winners while only making development more expensive.

Make it cheap and easy to build and the problem will start to abate. Stop with things that only make it more expensive to build like "affordable" units and required parking spots and setbacks.

Zoning only matters to the exterior. Anyone can buy a smaller house, renovate it, and charge whatever they want for the condo/rent. That's what displaces people.

...and why are the rents skyrocketing?

Could it be because maybe there are more people who want to live in the city than there are houses available?

Rents can only go up

When people exist to pay those rents. If there's no demand for a studio at $3K/month, then the owner either must eat the carrying cost of the empty unit or lower the rent.

Rent control will not fix the affordable housing crisis. It protects a subset of renters who have artificially low rents grandfathered into the system, and everyone else is screwed. Those units rarely, if ever, turn over, so anyone new to the market ends up competing in a smaller rental market with even higher-priced units.

The only stuff which would be built would still be "luxury" units because landlords/developers will want to lock in the baseline rent at as high a level as possible if the rents will be regulated in future. You want to start with rents of $5K/month rather than $2K/month if you're only going to be able to raise rents by one or two percent a year.

This particular spot is a 3-minute walk to Wood Island. This is EXACTLY where we should be encouraging greater housing density.

Put a tax on vacant units. That will drive down rent costs

That's all. If owners don't feel pressured to rent then they won't till their price is satisfied.

We need to do something about these unelected goons stopping housing in our city.

"… saying it was just too dense and did not fit in very well with other buildings in the area."

I want to know who approved the credit union next door, which is nowhere near dense enough and would fit in better in Mansfield or Southborough or Billerica.

We need to kill (or dramatically reform) the BZA and probably the BPDA and change zoning to re-legalize what was built in these neighborhoods 100 years ago.

Do you honestly think the

Do you honestly think the entity stopping development is the BPDA? They might be unelected but they are very much influenced by the community and locals who don't want buildings in their back yards. The entire reason why these entities exist is to create distance but the message still breaks through. Do you really think if the BPDA was directly elected if City Councillors had final say that things would be any more dense.

This isn't an argument against denser development but more so a reality check about why more doesn't happen. I don't think there is a city planner on earth who believes on their own accord that building low density is the better choice.

If you want change you need to convince the masses to want change or at least not impede it.

Blaming BPDA for lack of density is silly. If it were up to them in a vacuum the entire city would be one giant structure with 50,000,000 people.