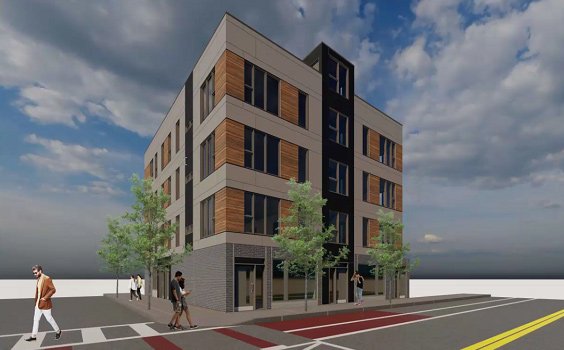 The Zoning Board of Appeal today voted 4-2 to approve Juan Chavez's proposal to replace his auto-collision shop on Washington Street at Bexley Road with a four-story apartment/commercial building - which means the proposal was actually rejected because it didn't get the 5 votes required under state law.

Chavez, who has run the shop for more than 20 years, is seeking to retire due to an injury and had proposed razing his garage and building seven apartments, with two storefronts on Washington Street, and a common roof deck, but no parking

At issue for nearby residents was the proposed building's lack of parking at the site.

He said Chavez was trying to "thread the needle" of competing requests from the surrounding neighborhood and commercial district. "We can't possibly appease all parties with all requests."

But Smith said the building is well suited for the carless generation - it's on a street with numerous bus lines frequently running to and from Forest Hills and is near the Roslindale Village commuter-rail station. And he said that the proposal, by eliminating a long curb cut on Bexley Road, would add four or five on-street parking spaces.

The mayor's office supported the proposal. Aides to City Councilors Ricardo Arroyo and Michelle Wu declined to take a position.

Board Chairwoman Christine Araujo, a Roslindale resident, said she could not support the proposal because of the parking issue. She said it's already difficult enough for people to shop at some stores in Roslindale Square because of parking difficulties.

In June, the BPDA approved a 31-unit apartment building with ground-floor retail space and a theater at 4198 Washington St. that does not have any on-site parking.

In addition, the plans called for access to the roof deck via a head house, rather than the simpler and smaller hatch the board generally requires for deck access.

Also, "I think the community is owed better in proposal and design," she said.

Board member Joe Ruggiero joined Araujo in voting against the proposal. Member Eric Robinson recused himself. Other members voted to approve the proposal on the condition that BPDA designers work with Chavez to resolve or minimize the issues.

Video of the hearing:

Doesn't the new law that Governor Baker proposed, and the Legislature passed, eliminate the requirement for a supermajority to approve housing developments?

No. This law only changes the

No. This law only changes the threshold for passing new zoning, not for ZBAs to approve individual projects.

These are the kinds of god awful decisions that just reinforce this being a city friendlier to cars than to people.

There are those who have

There are those who have physical challenges for which they need a car to drive to doctor's appointments, the grocery store. Would you prefer only able-bodied people reside in the city?

One of the units

On the ground floor, would have been ADA compliant, and next to the new on-street parking spaces, so I imagine that if somebody did need a car, they could get a designated HP space.

I'll say this every time

The people who absolutely need a car, would all be much better off if everyone who didn't need a car didn't have one and the roads were clearer for those who had to use one.

If anything, this is more of an argument to vastly increase our proportion of handicapped spaces and the like, if that's what we're actually concerned about.

People with disabilities can benefit from walkable areas too tho

People say that and it's certainly not wrong that if we just banned all cars altogether that would impose a burden on many people with disabilities if replacement accommodations weren't made. But it goes both ways: there's quite a few disabilities that make it impossible for people to drive a car safely. A blind person might really appreciate having an apartment a short walk from a bus stop where buses stop frequently.

People have cars. Until there is a better alternative to driving a car (there isn’t), they need to provide parking for tenants. ¯\_(ツ)_/¯

If they don't provide parking

then they will attract only tenants who don't need parking. If the developer can live with that, what's the problem?

That’s a good point, Ron. I personally would not move into an apt if there was no parking. ;p

However most people who live in the Fenway, Back Bay, North End and South End don't agree.

This isn't in Fenway, Back Bay, etc

However most people who live in the Fenway, Back Bay, North End and South End don't agree.
up

It's one of the most walkable 'outer' neighborhoods in terms of services and transport. Lots of other places built in the last two years with parking if you need it.

There are many better alternatives to driving a car.

Boston was not designed for cars and that is the real problem. Boston's population has been higher than now, it just didn't have as many cars. People were just fine, and actually healthier than now.

Infrastructure here isn’t made for the current population. I still don’t find the MBTA as reliable as my car though. That’s what we need to aim for: RELIABLE public transit. The T is great in the sense that it can get you anywhere in Boston, and it’s fairly CHEAP, but it’s not reliable. I’d rather be sitting in traffic on 93 then having to unexpectedly stand outside JFK waiting for a freaking shuttle.

Cars aren’t reliable and you

Cars aren’t reliable and you mentioned why: traffic. If someone values parking that much why the hell are they living in a city?

Because I was born and raised here, baby. And I have plenty of street parking. Bye.

you haven't measured the reliability

93 comes to a stop every day. The T has problems, but not every day.

I mean, say you need food. The nearest Target is across the street. Next to a Dunks. The Village Market is a 5 minute walk, Rozzie Hardware is a 10 minute walk.

Want to go outdoors? 5 minutes to the Arbs, 10 to Stony Brook.

Commuting? 2 minute walk to the bus stop and a bus lane to Forest Hills. 5 minutes to the Commuter Rail. And going the other way, you can hop on the 34 out to Legacy Place and the Dedham Mall.

But yeah, impossible to live there without a car. Next question.

Tell that to over a third of the city

Over a third of households in Boston (and even more in Cambridge) manage to make it without owning a car at all. Clearly its possible for a significant chunk of people to manage to live here without parking a car. Nothing wrong with building housing for them.

this is genuinely upsetting

Absurd that this was voted down by a 2-4 minority. Instead of 7 apartments and 2 new businesses, we'll have an abandoned auto body shop. All because of a supposed lack of parking a block away from a bus stop servicing 10(!) routes and a 5 minute walk away from the CR.

I've genuinely never had trouble parking in Rozzie? Even on a beautiful, sunny Saturday during the farmer's market, there's always spots in the Taft Hill lot if street parking is full despite the (temporary) medical tent.

Also, where was this proposal listed? I frequently troll the BPDA proposals but never saw anything about this, or else I would have commented in support.

Probably too small for the BPDA

I think they only get involved with more than X number of housing units (10?) or a certain square footage, neither of which this project met.

So she voted against this because she personally wants to be able to drive into the square and find parking. At the least she should have recused herself.

Lived at 16 Bexley and absolutely loved it until the place was bought and "condo'd out".

Trying to visualize the building on the corner, but sticking something there might be a slight nightmare. This corner is so busy with people cutting through on Bexley and all of the traffic on Washington... It may not be a good idea.

If it ends up being affordable, I would move back to Rozzie in a hot second and ditch the car!
Peace/out

Anyone who wonders why we

Anyone who wonders why we have a housing shortage needs to look at THIS EXACT EXAMPLE.

"Christine Araujo, a Roslindale resident, said she could not support the proposal because of the parking issue. She said it's already difficult enough for people to shop at some stores in Roslindale Square because of parking difficulties."

That's why there's time-limited or metered parking near stores: so people storing their cars for the day or longer don't make things inconvenient for shoppers.

Off-street parking requirements drive up the cost of small apartment buildings, take up space that could otherwise be housing or retain, and in some cases make the project totally infeasible. The nicest parts of Boston function just fine with a combination of non-car transportation and on-street parking. There's no reason why we have to ban all new construction without off-street parking.

"Our policy platform is more than a vision. It’s a promise to Boston residents—a commitment to take on our hardest challenges ...

Whether it’s as basic as fixing administrative processes ... using policy to change systems has been at the core of my time in public service."

So, with her "no position," just called herself a fucking liar?

Can you read good and do lots of other stuff good too, bro?

Let me guess, you'd rather we just bow for cops and let developers build baby build?

She has an aide who is quite vocal at zoning meetings. But not this one. The only reason we know about Wu's position is because Araujo noticed he was on the Zoom call and specifically asked him if she had a position, not because he did the Zoom equivalent of raising his hand (unlike Arroyo's aide, who did). So one could argue Essaibi George also declined to take a position.

The site may not be in Andrea Campbell's part of Roslindale, but it would be close enough that one could argue her aide's absence also means she declined to take a position.

Juan Moreno only wants to

Defund the zoning board. It. Is. Pointless.

How do you approve a 31 unit building the reject this building two blocks away?

The BPDA approved that other building

The ZBA has yet to hear that case.

Here's the thing. It doesn't

Here's the thing. It doesn't have 5 off-street (private) parking spaces but it does create 5 on-street ones, which are public and can be used by anyone, AND we get a new ground floor retail space for the entire community to use rather than a ground floor full of other people's cars. I would call that a win-win.

"And he said that the proposal, by eliminating a long curb cut on Bexley Road, would add four or five on-street parking spaces."

Those are for Christine and her friends

Not for newcomers to town.

DNA evidence leads police to Roslindale man, now charged with 2013 rape in the Arboretum, 2007 rape in Mattapan
Citizen complaint of the day: Garbage hermeneutics in Roslindale Sqaure
Roslindale Substation formally re-opens as co-working space/beer hall with a pop-up bookshop
Roslindale man missing, possibly in Berkshires forest
On second try, with some parking added, plan to replace Roslindale repair garage with condos, stores is approved
One Roslindale porch pirate might be down in the dumps