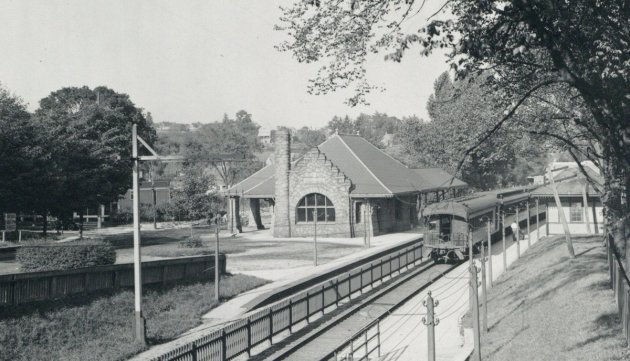 One of the Roslindale or West Roxbury stations?

I can't really picture this anywhere else.

I'm going in a different direction

To say the least, that is an H.H. Richardson design.

But Newton isn't Boston so the archives wouldn't have the shot.

but that's on the Brookline side of the Muddy River, so no.

It's not where, but who

Wherever the station is, the photograph was taken by a city agency. Back when the Riverside Line was being built, the Metropolitan Transit Authority was not a state agency. I believe their archives are with the City of Boston. They've posted photographs from Revere in the past for the same reason.

The MTA was a state agency

from the MBTA history page:

In 1947, the state legislature formed the Metropolitan Transit Authority (MTA) to absorb BERy [Boston Elevated Raliway]. The MTA then purchased all outstanding stock and ended the practice of dividends. It was managed by 3 governor-appointed trustees and served the citizens of the original 14 towns in the Public Control Act.

In 1957, the MTA authorized the expansion of rapid transit along the Newton Highlands Branch of the Boston and Albany Railroad. Service on the Highland Branch began in 1959, and is still in operation today as the Green Line D Branch, with service between Boston and Newton, MA.

I tried to track down the history. I had things right up to 1949.

Still, in that case it would make little sense that the City Archives would have any railroad station photographs.

Railroads were private at that time

The MTA did not control or subsidize them. That did not start to happen until the MBTA was created in 1964.

This station was on a line run by the New York, New Haven, and Hartford railroad (usually just called "The New Haven railroad")

Could it be something Hyde

Could it be something Hyde Park or Readville direction?
-
Two-track line, reminiscent of any number of locations with road overpass, fairly level in foreground, hills in the background...
-
Blowing up the photo, looking at the station building wall (above the large window) - it looks a lot like a short name, beginning with an H or an N. Was there a High Street or North Street station somewhere back in the day?

I think that's what is etched in stone on this station. And this is still a stop on the Needham Branch today.

I think you've got it.

I think you've got it.
Looking east-northeast from Park St overpass. 1924 West Roxbury Bromley shows a station building and what looks like a shelter (opposite) in the right spot, and that it was a two-track line in the past.

There's only one track at

There's only one track at Highland though. Were there two back in the day?

I don’t actually know. But I believe the Needham line used to have two tracks. This is based on the fact that the Lagrange bridge is visibly half as wide as it used to be.

At some point, it was single tracked to save money.

Those savings now mean that with more frequent service upcoming this spring, trains have to sit for several minutes to allow them to pass each other!

This postcard provides a

This postcard provides a clearer view of "Highland" etched in stone

In some pie in the sky future, to have a stylish covered station in Roslindale but there's about 100,000 things the MBTA needs to spend money on first.

My guess is Harrison Square in Dorchester, where the two legs of the Red Line now diverge, looking from the Old Colony line towards the right of way of what is now the Ashmont line (which was originally the Mattapan branch as a steam railroad, up until the 1920s). Do I see the Ashmont roadbed behind the building to the left of the station?

I lean more towards Ashmont prior to the purchase of the right of way by the Boston El.
Late teens early 20s...

Originally, I had said it was West Roxbury station, but that curve to the right hand side is unmistakable - that leads to Bellevue station about 1/4 mile away. The station is located where the parking lot is now.

The old station was on the Centre street side—so looking at it from this angle, you would have to be looking over the LaGrange bridge.

There are two tracks in the

There are two tracks in the photo.

Back when waiting for the streetcar ...

.... could be a pleasant experience.

This is a steam or diesel railroad train.

Although what's now the Green Line "D" streetcar branch was converted from a railroad line, those stations are all in Brookline and Newton.

Easton’s old train station, now the local historical society was designed by HH Richardson, probably not close enough to Boston to make it their archives but the pond in front of it looks right

I live about a half mile away from there. But I originally thought Roslindale/West Roxbury-ish

Could it be the old Ashmont station? there is a photo of the old station in the new one that looks like it was taken from the opposite side of the tracks from this photo. There was a small white building on one side...But I don't know what the surrounding area looked like back then.

Richardson designed a couple of stations....

for the Boston and Albany Railroad, though they were demolished (I believe). One of them was in Chestnut Hill, but I can't really tell if this is that one.

As suggested in some of the comments, this is most definitely the Highland Station in West Roxbury. A quick search revealed another alost identical photo, and others where the word "Highland" is clearly visible in the stonework above the arch window. Alas, no longer standing!

Been so long since I have taken the train. Aw, I kinda miss it. Well, Stoughton is my stop now until the trains finally come back to North Easton.... sometime next century....

As has been noted, Richardson did a lot of work for the Boston & Albany.

As I recall, one of Richardson's Harvard college classmates was the son of the President of the Western Railroad, headquartered in Springfield, which later merged with the Boston & Worcester RR to become the Boston & Albany. That college connection got Richardson his first architectural commission, for a church in Springfield, where his friend's family were members of the congregation. It eventually blossomed to a point where Richardson became sort of the house architect for the B&A. After Richardson's death, some of his assistants formed Shepley, Rutan, & Coolidge, which became his successor firm, and continued to design stations for the B&A up to and including South Station in 1899.

Another of Richardson's assistants, A. W. Longfellow, also did one or two stations for the B&A after the master's death.

There were Richardson/Shepley stations in Allston and Brighton -- think the former Allston Depot restaurant -- but that was a 4-track main line, not the bucolic scene shown here.

Richardson only did 3 other railroad stations that weren't for the B&A: two large city stations in Holyoke and New London, and the small-town station in North Easton. The latter contract came because the Ames family, of North Easton, were also patrons of Richardson. He did several other buildings for them in that town, plus some buildings in Boston, and a memorial in Wyoming.

That being said, the Highland station in West Roxbury has a very Richardsonian appearance, even if he didn't design it. It was also the only stone station along the Boston section of the old Dedham Loop. According to the color coding in the 1924 Bromley atlas, Roslindale and Bellevue were brick, while West Roxbury and Spring St. were wood.

The connection between West Roxbury and Needham wasn't built until 1906. Prior to that, trains to/from Needham operated via Newton Highlands, Brookline Village and the Back Bay. The trains serving West Roxbury looped through Dedham and rejoined the mainline at Readville.

Does anyone know why this station was demolished?

I can understand demolishing a station if train service ends, but this line has been in continuous use (with a few interruptions for Northeast Corridor Amtrak construction) ever since this photo was taken.

At a guess, decrepitude

There were stations like this at some of the other Needham Line stations (Roslindale for example), but they are all long gone. My assumption is that they fell in to a state of disrepair as the New Haven edged closer to bankruptcy. Alternatively, they may have been demolished in the name of "progress" to make room for more parking.

I'm not sure about Highland specifically, but in Roslindale, the building was probably serving the somewhat significant freight depot functions, and no longer seen as necessary when freight operations ended.

When the commuter rail lines

When the commuter rail lines were still operated by private companies (The Boston & Maine, The New Haven, and The New York Central) they often would sell off and/or tear down small suburban station structures to reduce their tax burden

Thanks for playing, folks! This is indeed Highland Station in West Roxbury. We don't have an exact date for this photo, but we believe it was taken in the 1920s.

We may not have many horse-drawn wagons on our streets anymore, but our hydrants still look the same
Some levels at Alewife parking garage to re-open Wednesday for people who want to take a bus somewhere; Red Line service could resume by Saturday
Boston seeks neighborhood artists to replace all those blue oval welcome signs
Boston gets first two electric school buses
Too cool for school
It's official: Boston to get wicked cold