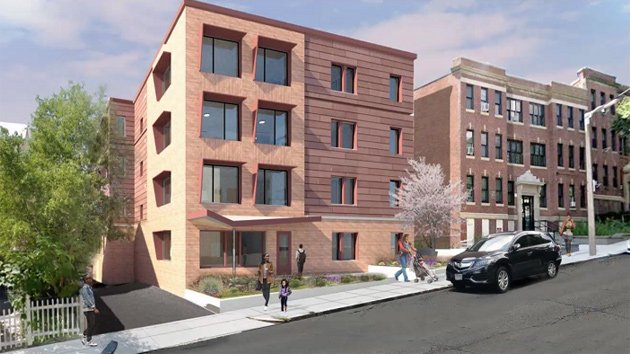 The Zoning Board of Appeal today unanimously approved a non-profit group's plan to replace a crumbling 10-unit apartment building at 37 Wales St. with a new four-story building with 20 apartments for families coming out of homelessness.

In April, the board had rejected the original proposal by Heading Home, Inc. for the site, which called for 23 apartments on five floors, because of neighborhood concerns about density, parking and water runoff from the site.

In response, the group lopped a floor off the proposal, said it would replace a collapsing retaining wall on one side of the sloped property as part of demolition of the current structure rather than wait for construction of the new building and that it would add several storage tanks to capture rain falling on the site so it would no longer immediately run downhill.

The group added it has an agreement with the city's Department of Neighborhood Development to use a vacant city-owned lot at 27 Wales St. for four parking spaces and is negotiating with the Salvation Army to use its lot across from that site for four additional nighttime spaces. The site itself will have one off-street parking spot, for a Heading Home staff employee who would work with the residents.

Heading Home acknowledged the street might still see runoff even after the new building goes in, but said that's because 37 Wales St. is not the sole source of runoff on the steeply sloped street; at a neighborhood meeting earlier this year, one resident who lives uphill said he sees flooding as well. However, the group said that BWSC has begun studying Wales Street to see if the ongoing issues can be solved for the entire street, for example, through the possible addition of new catchbasins.

The mayor's office and the offices of City Councilor Andrea Campbell and state Rep. Russell Holmes supported the proposal.

Some residents opposed the new, smaller proposal, both because of the runoff issue and because they remain unconvinced the building will not contribute to neighborhood parking woes. They cited the fact the Salvation Army has yet to actually agree to let Heading Home have up to four tenants park cars at night in its lot. And even though there are other multi-family units in the area, the building "is just too big," one resident said.

In my view, it should be explicit public policy that neighborhood parking woes may not be used as a reason to oppose.