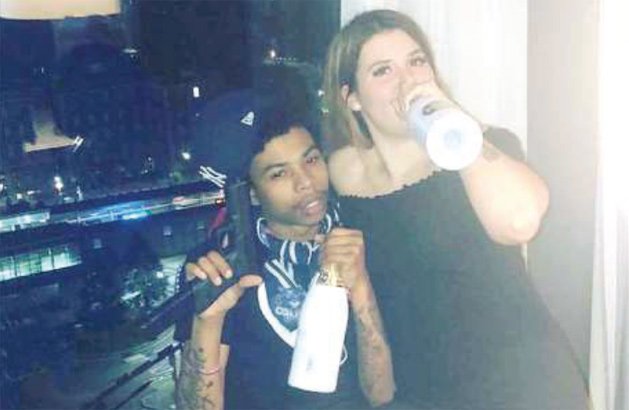 Couple in love with each other - and guns and Belaire champagne, from FBI affidavit.

Christina Bernbaum, 23, of Malden, pleaded guilty yesterday to federal drug and gun charges related to the crack and guns she and her boyfriend allegedly sold to gang members north of Boston, who used the guns to spray rivals and rival territory with gunfire.

Because at least one of the guns was a machine gun, she faces a potential life sentence, the US Attorney's office reports. Her sentencing hearing was set for April 6, 2022.

Her beau, Jaiir Coleman, has agreed to plead guilty as well. He faces a formal plea hearing on his request in January. Both were arrested this past April.

Bernbaum was formally charged with conspiracy to distribute and possess with intent to distribute 28 grams or more of a mixture or substance containing a detectable amount of cocaine base and one count of conspiracy to possess, use and carry firearms in furtherance of a drug trafficking offense.

According to the US Attorney's office:

Bernbaum participated in a long-running conspiracy to manufacture, distribute and possess controlled substances, including in large quantities in Massachusetts and in Maine, including on Coleman’s behalf during his incarceration.

An affidavit by an FBI agent who participated in building a case against the couple linked the guns they sold to "650 separate shootings and over 1,900 rounds fired" in Chelsea, Cambridge, Everett, Lynn, Malden, Somerville and neighboring communities.

That includes Boston, where officials say a gun used as part of a fusillade that left Martin Luther King Boulevard and two intersecting streets strewn with 32 spent shells in August, 2020 was linked to Coleman - whom they charge had used it earlier to spray streets in Somerville and Chelsea with bullets. Two Canton residents were arrested in connection with the Boston gunfire.

Coleman and Bernbaum were the first to be formally charged in connection with what the Boston-based feds codenamed "Operation Street Sweepah: Kings of Belaire" - the second part of the name for the way the couple and their buds are frequently seen swilling Belaire champagne on recovered photos and videos.

I hope her aunt comes back

To defend her good family name. Is she still a city councilor in the same town?

I do enjoy how Revere, Malden and Everett have an ongoing contest to see who can have the shadiest people in government.

I truly fail to see what this

I truly fail to see what this has to do with her Aunt??

Is that all you want to tell them?

She made dean's list earlier this year so I think she's going to be okay.

You *could* call Belaire Luxe "champagne",

but it's more like "the $30 French sparkler that's worth $10 but is hyped by shitty rappers and DJs." It's the kind of sugary, bulk-process plonk only an overgrown, drug-addled teenager could love.

A life sentence is still on the table in a plea deal? (Expletive), was she facing the death penalty?

maybe the plea carries a sentence of time up to life, like 15yrs to life, versus a possibility of life without parole had it gone to trial?? I could be wrong, but I’m sure a uhub member with some real law knowledge will chime in eventually.

Well, she won't be serving a life sentence. Check back in April to see how things play out. If I were wagering on this, I'd put $2 on her sentenced to less than 10 years, but wouldn't be surprised if it were a sentence in the 10 to 20 year range.

Judges basically have a scoresheet to help figure out a sentence: People get points added for the type and frequency of their crimes and their records, they have points subtracted if they plead guilty. Based on the final score, and a detailed report from the probation department, the judges come up with a range of potential sentences.

Typically, both prosecutors and defense attorneys write memos explaining why the judge should go hard/easy when it comes to picking a specific sentence from that range.

But even if she doesn't get life, she's not looking at merely probation, I don't think.

If it involves machine guns

No wonder the cops tend to win the shootouts.

That little dork has trouble holding the piece.

Magoo wonders if they think they look cool in that photo. One time Magoo thought Magoo looked cool in a photo but Magoo then considered the photo again and came to the conclusion that Magoo did not look cool. Magoo.

I still have that pic you posted…

Maybe you should lay low for a good long while.

I know there's a range of thinking on generating "code" and "operation" names, but ... sheesh.

The Fresh Princes of Bel Air was already taken.

A childhood friend just wrote a book about one of the most notorious madams of the jazz age and she has amassed quite a collection of flapper+gangster+booze+guns pictures from 100 years ago that are similarly composed, if only slightly more formal in setting.

Malden man gets 6 1/2 years in federal pen in latest success for 'Operation Street Sweepah'
Sand doesn't melt
A Connecticut Yankee in King Storrow's Court
Orange Line was the little train that could, 'til it got near Oak Grove, now it seems dead for good
The new CharlieCard vending machines are in
Guess we know who won't be signing up for the vaccination lottery