In Dorchester, a neighborhood full of three deckers, new three decker opposed because of flat roof

The Zoning Board of Appeal today approved construction of a modern three decker at 34 Dorset St., but with the condition BPDA designers work with the developer to add a pitched roof and maybe some dormers to make it look more like most of the other houses on the street - and even the housing development across the street.

The building needed several variances in part because of its size.

Although two neighbors said they supported developer Adam Sarbaugh's proposal, more than 100 other nearby residents signed a petition opposing the proposal. One resident who testified said that neighbors felt the building would be too large - it would be the second largest on the street - and added that aesthetically, the building just wouldn't fit in on a street with mostly slanted roofs.

She noted that even the Bellflower Apartments across the street have pitched roofs. However, the new three-unit building would be next to an existing three decker.

Sarbaugh's attorney, Nick Zozula, said he was not sure why Sarbaugh went with a flat roof, but said it was likely it was so he could get full living space on the third floor, which might not be possible with a slanted roof without requiring another variance, for overall height.

The board unanimously approved the plans. Member Joe Ruggiero moved approval subject to BPDA design review. He said the space issue might be solved with a combination of a pitched roof and dormers.

We pay people for this nonsense?

Under what theory of government

Under what theory of government does the ZBA, whose enabling legislation gives it the power to regulate things like usage and square footage, have the right to get involved in what a building outside of a historic district looks like?

But the BPDA has the right to do that, hence the referral to the BPDA.

Your headline says Dorchester, the link says 34 Dorchester Street (that's South Boston), I clicked on the link and it goes to Dorset Street in Dorchester. Odd goings on!

nothing really classes up the joint like some more of that crappy chain link fence in the front yard.

What does it mean for them to

What does it mean for them to unanimously approve something, on the condition that it gets changed subject to further approval?

The Bellflower Apartments across the street replaced many of the buildings that burned in the 1964 Bellflower Street fire, so I wondered if 34 Dorset had also been destroyed. If I'm looking at this correctly, it was actually already a vacant lot back then. The map shows a gap between 32 and 38 here: 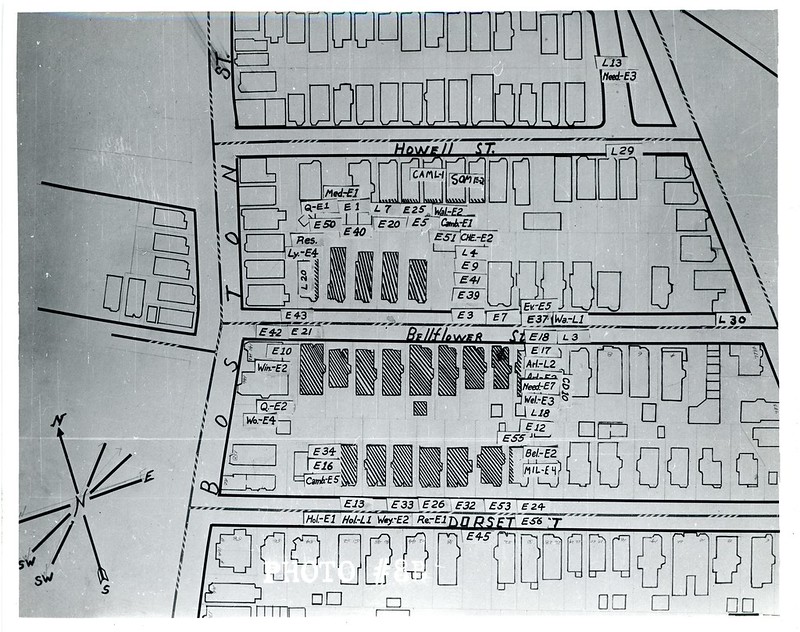 34 Dorset would be the first lot that's out of frame on the left, here: 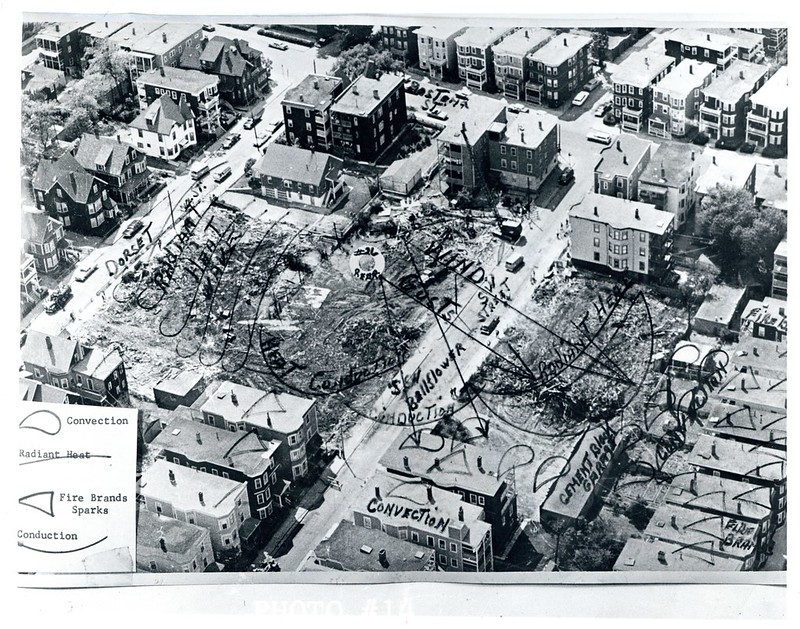 What the hell is the point of having zoning code if some scumbag with money can ignore all of them and still get approval?!

And for the record Adam, there isn't a *single three decker* on Dorset st.

Looking forward to seeing Mr. Sarbaugh around the neighborhood...

There isn't a *single three decker* on Dorset st.

Wow, this zoning code sounds HORRIBLE. If this proposal isn't allowed, the problem is the law.

The original point of having

The original point of having a zoning code was to limit what kinds of people could live in a neighborhood. I'm not sure anyone should really be defending that system.

Not a single triple decker?

Mind you, that is just me looking for the classic style. I’m certain several other addresses have three units (and yes, I am not counting that which replaced the fire site.)

What is the point of living in what has been developed as a densely populated urban neighborhood for over 100 years if you really want to live in a suburban area with 2500 sq ft single family houses on 1/4 acre lots?

Apartment building for families coming out of homelessness approved on Wales Street in Dorchester after it's reduced in size
Man stabbed in the back on Dot. Ave.
Non-profit proposes affordable apartments for seniors on Hamilton Street in Dorchester
Two shot, one dead in Franklin Field
Students at high school moving from Hyde Park to Columbia Point say they're not getting what BPS promised
Single-family house on Dorchester's Meetinghouse Hill could be replaced by 15 condos