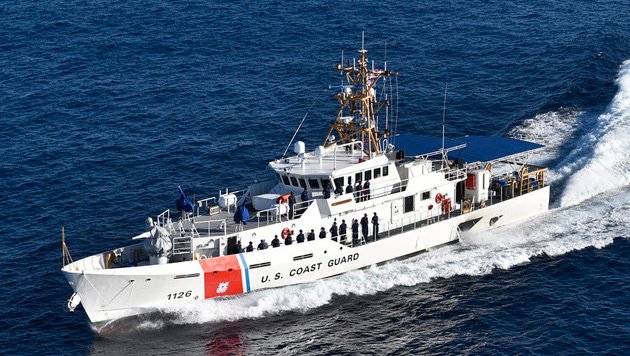 One of the new cutters, well away from a dock. Photo by USCG.

The Coast Guard goes before the Boston Conservation Commission next week for permission to replace two piers and install new floating docks at its base off Hanover and Commercial streets to allow it to dock six new larger cutters currently under construction in Louisiana.

The new fast response cutters are 154 feet long, compared to the current 110-foot patrol boats that now operate out of Boston. They can travel up to 28 knots, have more advanced navigational technology and have berths for up to 24 crew members of both genders. And because they're also wider and heavier, they can last longer in rough seas. They can deal with rough people via a cannon and four machine guns.

The Coast Guard says that the existing land-based pier and wharf are both 76 years old and well past their original expected life. Also, the amount of load they can take from docked ships is far less than is required by the new cutters. In addition to the cutters, the work will also let the Coast Guard berth a smaller patrol ship.

The first of the new cutters is expected to arrive in Boston in 2022.

The Conservation Commission hearing will in a series of hearings that begin at 6 p.m. on Wednesday.

Adding two more machine guns and increasing the crew by 33.3 percent should bring terror to any would be New England wannabe pirates and/or smugglers. The larger hull and longer loiter time will enhance rescue operations as well. The Coasties be getting toasty, Baby!

My interpretation was that

My interpretation was that the new ships would fit but not all necessarily be docked in Boston.

What happened to Menino's Fort Point bar barges? I get it was not a priority for Marty can we please get them now?

the affordable housing quota. 16% of that new development has to be reserved for families making 80% of the regional AMI. Luckily, 1 dock out of the 6 would be just about 16%!

They can only have the docks if the ships are built in Massachusetts, preferably central or western Mass.

Weird Feds Have To Ask Permission?

I find it weird that the Feds have to go before a city based agency for approval here? If this were a Navy base, I’d assume they’d just do it without civilian review.

It isn't the same as a Navy Base - it is more of a port facility. This impacts city services far more than a change at a base would.


The wreck of a legendary US naval ship that served in two world wars, performed patrols in waters off Alaska for decades, and at one point was captained by the first Black man to command a government vessel has been found.

A wreck thought to be the USS Bear, which sank in 1963 about 260 miles (418km) east of Boston as it was being towed to Philadelphia, where it was going to be converted into a floating restaurant, was located in 2019.
. . .
The announcement on Thursday coincided with the arrival in Boston of the US coast guard cutter Healy, named after the Bear’s captain from 1886 until 1895, Michael “Hell Roaring Mike” Healy.

The Guardian refers to the "USS Bear" as a naval ship, but the article makes clear that it was for most of its service in the Coast Guard, and before that was a revenue cutter. Healy was the aforementioned Black captain. More on the Bear here.

Give the Coast Guard Long Island as a base. The Feds will repair the piers and build the bridge and secure the island while allowing for a drug rehabilitation campus. The Feds would also quickly put an end to Quincy's opposition.

they must have shark intel that we dont

because they're getting multiple bigger boats.

Good thing they're only getting six cutters

If they were to get ten, one of them would have to be affordable.

That would be a cost cutter.

That would be a cost cutter.

Man broke into Hanover Street apartment, beat woman, then smashed into bathroom where she took refuge with her young son, DA says
Court officer charged in North End couch-moving rage that sent victim to the hospital with multiple broken bones
Where you can sign a condolence book for the queen might surprise you
Citizen complaint of the day: Is there a Delta House chapter in the North End?
If you were an aging gangster in search of a place to live, where in the North End would you look?
Board approves new hotel along Greenway in the North End