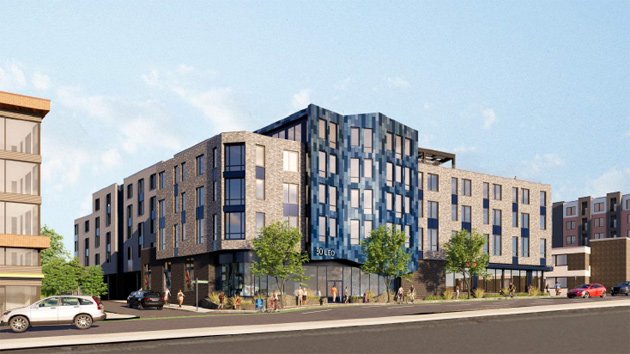 The Mount Vernon Co. this week filed its plans for replacing a Santander Bank branch on Leo Birmingham Parkway, next to the Radius building, where the old Black and Decker service center used to be, with a five-story, 99-unit residential building with ground-floor commercial space.

Some 13 of the units will be marketed as affordable.

Mount Vernon, based nearby on Soldiers Field Road, is also propsing 48 parking spaces, but space for 102 bicycles for residents and employees, 24 more bicycle spaces for visitors and a 15-bike Bluebikes rental station.

In its filing, Mount Vernon says it will not build right up to the current sidewalk, which it says means it will be able to create "a pedestrian-friendly environment and green buffer against the high-traffic zone of Leo M. Birmingham Parkway" and continue "the pedestrian-friendly street experience
established by the Radius Apartments." The company notes it will also sit next to another proposed six-story building, which in turn will be built next to another six-story building and then over the turnpike you have the WGBH building and around the corner from that is all the development that started with the giant New Balance complex. All told, Mount Vernon says, its building will "add to the new rhythm created by Projects that have been recently
developed or are currently under construction along Leo M. Birmingham Parkway."

Mount Vernon is proposing various plantings, including a total of 12 street trees in planters, along Birmingham Parkway and Lothrop and Waverly streets - except at a bus stop on the parkway, which will be kept clear, and part of Waverly Street, where an underground gas main makes tree plantings impossible. Along the rear of the property, the company is proposing evergreens and deciduous upright shrubs to shield the existing homes there from the building and a parking lot.

The view you'd get standing in the middle of Birmingham Parkway, assuming you first made sure no cars were coming: 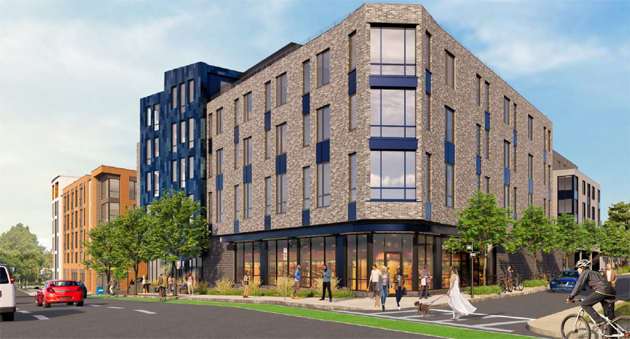 With all the development around there, I've known it was only a matter of time, but I love that little bank building so much. There aren't many examples of that style of architecture left around Boston any more.

It is a cool building

Also, Santander calls the branch "Brighton Leo" (since there are others in Brighton) and that's also all kinds of awesome.

they designed the Radius,

which is pretty good looking.

How can they claim the area

How can they claim the area will be pedestrian-friendly? It's one of the most pedestrian UNfriendly parts of Boston. And for no good reason. There's plenty of room for the missing sidewalks, and traffic lights are pretty close together so it would be easy to add the missing crosswalks.

The developer should ask the DCR to add the missing crosswalks at Birmingham/Western, Western/the eastbound onramp, Lothrop St/the eastbound offramp (which has no legal way to cross Birmingham at all!), and Lincoln/Market/Birmingham.

And extend the dead-end sidewalks on the west side of Birmingham, which not only have goat paths indicating pedestrian demand, but also an actual pedestrian in Street View!

That stretch of road and intersections is god awful for peds and bikers. This area of Brighton has so much potential with all the new housing going up with ground level commercial. Decent bus access. Close to Brighton Landing and the Dudley bike path. But, I saw way too many people forced to walk through the median or the dirt paths through there and hated biking from the Charles to Brighton Center along that road when I lived in Brighton.

These are also called desire paths, which imo is a lovely phrase.

That whole intersection desperately needs a redesign and a massive aesthetic face-lift. And more trees; incidentally, apropos of https://universalhub.com/2021/boston-6-worst-heat-islands -- lack of canopy cover contributes to this. Really disappointed in the Radius developers not putting in ANY street trees along the parkway side before the right turn onto Western Ave.

Perhaps it's too much to hope that with increasing density along that corridor, the T would actually increase the overall frequency of the 86 bus; that bus gets jam-packed in the mornings.

Four years ago, the BPDA made some nice designs for a major transformation of Birmingham Parkway. Unfortunately, four years later they are still just pretty pictures and the road and public realm are still over-built and horrible.

Faded Brighton warehouse where musicians now practice could be replaced by, you guessed it, life-sciences labs
Owner of a Brighton Center massage business turned bordello agrees to repay the $7,066 in pandemic aid she got
Man sacrificed life to save girlfriend in Brighton fire
One dead in three-alarm fire on Perthshire Road in Brighton
Boston College won't require masks in classrooms; 300 professors ask school to reconsider
Citizen complaint of the day: Allston Christmas as a case of Natty Light