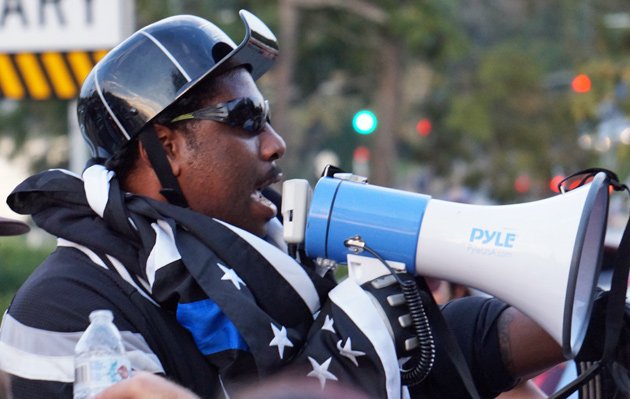 The Dorchester Reporter reports that both the Massachusetts Republican Party and the Boston Police Patrolmen's Association donated money to failed at-large candidate Donnie Palmer before the September preliminary.

Most of you probably only know Palmer, if you even know him at all, from his campaign to personally punch crime in the face. But as the Reporter chronicles, he also went full-bore racist on the topic of Michelle Wu, posting that he was aghast at the idea of "a Chinese citizen" running Boston (she is as American as he claims to be) and accusing her of being a gangster (along with Ayanna Pressley) who would take orders from Beijing on how to run Boston into the ground.

The day after the preliminary, Palmer literally wrapped himself in the black and blue at a pro-police rally in West Roxbury (where he tried bopping a couple of people in the head with a flagpole). The BPPA tells the Reporter that Palmer only started getting all racist after they contributed money to him in August and that the organization is just shocked and would never have condoned his racism, had it only known.

Palmer, who is also a Trump-supporting anti-vaxxer, now wants to run against Ayanna Pressley next year - just like three-decade annual loser Roy Owens.

Moving on ... Besides the non-binding question about an elected school committee, Boston voters next month will also vote on a question to let the City Council make amendments to the city budget (currently, the council can veto but not change what the mayor proposes) and to create an office to give the public more say in city spending. Four state reps - Adrian Madaro, Nika Elugardo, Russell Holmes and Liz Miranda, are supporting the Yes on 1 idea.

As a former longtime union member herself, Annissa understands the everyday challenges that face Boston’s working class. We know she’ll continue to show up for our members as the next Mayor.

The Ward 12 Democratic Committee in Roxbury has released its endorsements: Wu for mayor; Mejia, Flaherty, Halbert and Luijeune for at-large seats and Tania Fernandes Anderson for District 7.

hare-brained, bellowing freak is a Trump supporter, but…

And isn't it past time to fire those antivax cops?

could get rid of a lot of the racist/homophobe/trans phobe/nazi cops just by firing the losers who refuse to get vaxed.

Racism at a “Back the Blue” rally?

So weird how that keeps happening. Who could have seen this coming besides every reader of Universal Hub? And the cop union supported this guy!? That’s as surprising as finding an empty Bud Light can on Broadway after the St Patrick’s Day parade.

Also, someone in the last thread found it very hard to believe that Donnie Palmer was in league with white supremacists because of his race. This must truly be a shocking turn of events for that commenter and the 18 people who gave it thumbs up. I am sure they will thoughtfully examine the evidence and reconsider.

I believe the police/GOP were in fact surprised

Clearly they thought they were getting a) but ended up with b). Nasty business, being a Republican.

What the hell is that on his

What the hell is that on his head?

I'm thinking there must be a peg on the top of his head it attaches to.

Jim Lyons can sure pick them

"So many Democrats pretend to be Republicans and have infested this party with weaklings. They're everywhere! Even our sleepy Chairman Jim Lyons was once a Democrat. He will tell you this with the same lame speech he's made for 30 years if anyone cares enough to listen. It's a great gig working for Massachusetts Republican Party. Do nothing, nobody cares, nobody notices, nothing changes, still get paid. I ask who has time to work another full time.job as the chairmann of a political party? Is this his part time gig being chairman? Seems it to me. Acting as if all these issues just arrived and haven't been going on for decades under your "leadership.""

Now he brings Punchy Palmer aboard - another deep thinker:

"JUST SO YOU KNOW!!!
America never gained anything from slavery!!! White people never gained anything from slavery… One group were the big gainers... The group who owned the banks, the ships, the tea, coffee and drug trades…. They own the Democrat Party and the media!!! This is why you will NEVER hear a bad word about them on TELL - LIE - VISION... They are the Royal families of Europe!!!"