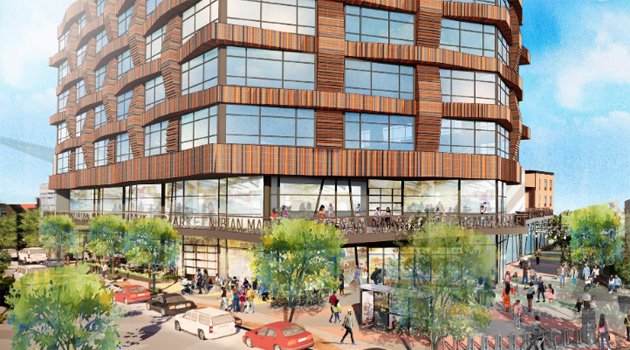 A Nubian Square business and developer told the BPDA this week they will soon file detailed plans for a seven-story building between Washington Street and Harrison Avenue that will include a food hall for local chefs, a market place for local artists and artisans, residential units for artists and space for life-sciences R&D.

In December, the BPDA selected Nubian Ascend Partners, headed by developer Richard Taylor and Black Market owners Kai and Chris Grant, along with London-based real-estate investor Mario San Jacinto, to build on the Blair parking lot - named for the supermarket for which it was built, but which closed decades ago. The BPDA has owned the lot since 1985.

The designation was the latest part of an overall city effort to revitalized Nubian Square by selling parking lots and vacant land for development, with an emphasis on affordable housing and commercial development geared toward locally owned businesses.

In a letter of intent, Taylor said the 384,000-square-foot Nubian Square Ascends building would include a "marketplace and culinary center" that will feature local chefs, a culinary training center and space for local artisans to sell their wares; a separate hall with performance and conference space; live/work condos for local artists; an "artist lab" for resident artists who need more space for doing their work and new homes for Black Market and Nubian Gallery.

All this will be capped by five floors of commercial space. One floor of the commercial space will be rented at subsidized rates to local businesses, while the rest will be marketed to biotech companies interested in more space midway between the Longwood Medical Area and the Seaport.

The BPDA estimates that the building, which the developers say will take three years to construct, will bring 900 new jobs to Nubian Square.

The plan also calls for a 300-car above-ground parking garage - and for closing Renfrew Street, which connects Washington and Harrison.

In their initial proposal to the BPDA, the developers said they would sell shares of the project, starting at $1,000, to residents who want to invest locally.

while the rest will be

while the rest will be marketed to biotech companies interested in more space midway between the Longwood Medical Area and the Seaport.

The LOI includes a line about the project being at the mid-point of LMA and BMC, which makes way more sense geographically than trying to say that Nubian Square is in any line you could draw between LMA and the Seaport. Though still, Nubian Sq is significantly closer to BMC than it is to LMA; more so than I'd be willing to call in the middle of the two.

i was really confused by that part too

i didn't grow up here but i'm pretty familiar with that part of town. almost pulled up google maps before i read your comment lol

And apparently they're seeking $4m in state funding for their 340 car above ground parking garage:

Funding for the garage will need City of Boston support for a MassWorks Grant of at least $4 million dollars as well as other financial resources in order to keep the garage pricing affordable for all stakeholders. The City has had success in this area having secured $800,000 for the Nawn Factory and $2.9 million for the Bartlett Garage. The top priority for Nubian Square must be the garage as this will be the first phase of our sequencing of the project . We are working with the very successful parking company of VPNE and local minority parking firm Prive Parking which is owned and operated by Ricardo Pierre Louis in a joint venture.

Is there really nothing more "climate forward" or "housing forward" that we could think of to do with this $4m? To say nothing of the fact that right now Nubian Square is already almost half parking lots by land area. Plus, it's not there's room to add more road capacity even if we wanted to. How are 340+ more cars going to get in and out of this square every day?

I can't help but feel like this garage, combined with 4 stories of high end office space, is intended to attract the sort of people to the square who have otherwise avoided it because they were afraid to go outside and walk around. In other words: The very gentrifiers we love to rail on whenever market rate housing is proposed. And not exactly something that is likely to benefit the local retail scene the way that a bunch of additional foot and transit commuters would.

Last time I checked, the Orange Line stopped coming to here in 1987.

Parking garages next to big buildings out of the core is nothing new. Hell, even 33 Arch Street has its parking above ground, as does Copley Place, and the Back Bay Hilton and all abut public transportation.

Why wouldn't buses count? Nubian Square is a hub for multiple bus lines that thousands of people ride every day.

And the fact that we built giant parking garages in the past is no reason to keep doing it, especially when we're now more aware of the damage that encouraging private car driving does to safety, the environment, and our health.

Aren't You A Wee Biased?

After all being named after a failed bus company shows you venerate poorly run things.

He doesn't call himself MegaBus

Now that is a poorly run company. Just corrupt enough to escape demands that they fold or leave by the media, despite KILLING people with their incompetence.

FungWah was a punch line, but they never killed anyone. I never had any problem with them, and they ran more or less on time, unlike megasuck.

but they never killed anyone

but they never killed anyone

You're not wrong, but I also think your statement is true through no effort of their own...

Is under half a mile from here.

As is the SWC bike path.

A $4 million grant from the state to subsidize the construction of a parking garage? YGBSM! The state shouldn't be handing out money to incentivize additional traffic in Boston. It's not even like they're planning to put it underground; nope, it's just a big, hulking garage with a bit of camouflage to make it slightly less ugly.

Instead of giving this

Instead of giving this developer millions of dollars for a parking garage, why don't we actively invest in public transportation?

If you want to drive a car, good. Move to a city in Texas, where land is plentiful.

From the "Development without Displacement" section (I kid you not):

The proposed 340 car Garage will serve to attract market and adjacent customers to come to the Square to purchase goods, services, food an enjoy entertainment.

Too bad you couldn't do anything else with what, at Boston inflated construction prices, will probably be well north of $10 million. How about zero new parking, and a 20 new affordable housing units?

It's not like Nubian isn't the city's largest bus hub...

This is why I buy scratch tickets...

A 6 family triple-decker at $1000 a month could finance my retirement. Why does it cost so much to build?

Vaccines, health info and free food in Roxbury
Roxbury man charged with killing cop, two other men in Rochester, NY
Alleged gang member was out on bail on charges he tried to shoot somebody in Providence when he was arrested on charges he tried to shoot a Boston cop
Board approves transformation of Nubian Square parking lots into new cultural, dining, residential and lab training spaces
Man who had enough of some guy's loud music on the Orange Line punches guy in the mouth, police say
Man who fled to Ethiopia after 2014 Ruggles Street shooting is arrested in Chicago trying to get back into the country, police say