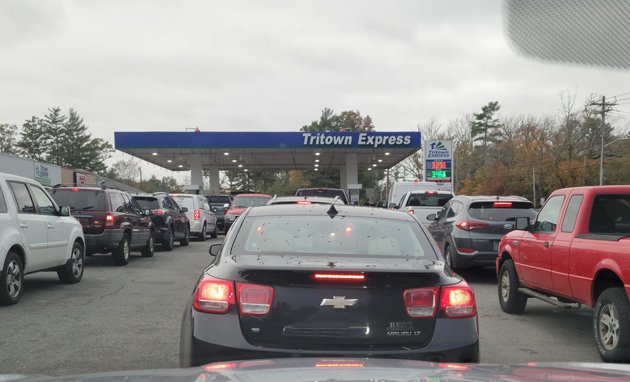 Left of the Aisle found himself in a gas line in the East Bridgewater/Halifax area this morning and suspects most of the people were like him - not hunting for gas for their cars but for the generators they have running in homes left without power by all the trees toppling onto utility lines in yesterday's nor'easter, which hit the South Shore way harder than the rest of the Boston area.

its a war zone down here

A failure of the French Toast Alert System?

Or maybe a success: the storm spared Boston, it's only in the hinterlands (outside of 128) where the eggs, milk and bread are necessary. I would imagine there is not much left on the shelving there. And the FTA system may be optimized for Boston proper, or at least 128. Adam probably can divulge more (if it's not a trade secret).

It's easy to poke fun from the unaffected north, but I'd imagine hopping on Route 3 and driving up to Braintree is a good way to avoid the lines if they're really hours long. One saving grace, at least for refrigerate-ables, is that with the cloud weather today and temperatures in the 40s, stuff left in a box on the porch should keep for a while. Frozens, though, not so much.

(Funny story, my uncle lives in California and has a house in Maine. He was there for Thanksgiving a few years ago, bought a ton of food, and arrived to find the power out and the genny broken. He was concerned that the food would all spoil and did I have any suggestions.

And the light bulb went on, well, not the literal light bulb; the power was still out.)

Not to say that this isn't real bad down on the South Shore, but 40s are a good temperature. Warm enough to stay warm with blankets, cold enough to preserve food, not so cold to freeze pipes. Hopefully the lineman and linewomen are streaming in from out of state to patch things together.

such as in that cold snap in Texas. I mean, the whole problem was *too much cold*.

40s are a good temperature...cold enough to preserve food

Cold food is safely held at or BELOW 40 degrees.

In other South Shore news