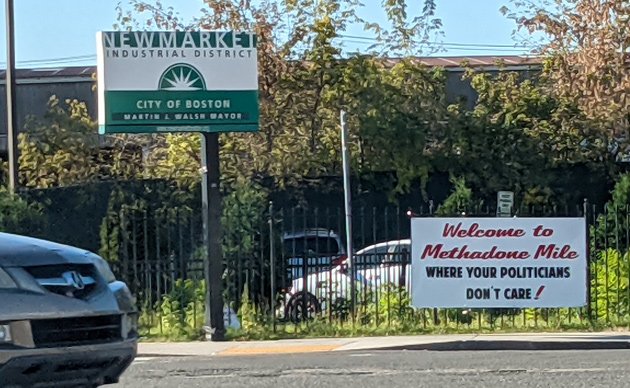 A roving UHub photographer couldn't help but notice this new sign up in Newmarket Square.

My brother suggested this name for the area and I think it fits.

If you want to see a sign honoring the Sacklers, head across the river: https://goo.gl/maps/njSHro5wbmeA1ac17

take down the "Welcome to Hamsterdam" sign a couple years back. Don't see this one lasting very long either.

Damn developers and realtors looking for ways raise prices like they did with renaming Lower Roxbury to "South End".

If you look at this map from way back when Roxbury and Dorchester were their own towns, the area is in Roxbury or in the literal South Bay. This map of Dorchester also seems to say as much.

Of course, at the end of the day the old line is that people will claim the good stuff and deny that the bad parts of a city, town, neighborhood are theirs. Take South Bay. When it was nothing, no one cared about it (except for my mum, who claims to have played in the bay itself.) Then a shopping center is built on the site, and the next thing you know Roxbury and South Boston are claiming that it a part if their neighborhood. Newmarket is probably the best designation for the area, and has been that way since before the first methadone center was set up there.

Pine Island is the key to this mystery

We all know that Boston borders are can be historically fluid, but I agree today it's best to call it Newmarket.

As you mentioned, much of Newmarket was literally under the South Bay once upon a time, but have you ever used the Atlascope tool from the Leventhal Center? Take a look at Newmarket today overlayed with an 1882 map. It still shows Newmarket Sq slightly on a geographic feature called Pine Island. Looking at the map, we can infer that Pine Island is a part of Roxbury.

But if we wanted further confirmation, we can look into historical writings about Roxbury. Pine Island is included as a location in 19th Century Roxbury directories. Furthermore, we can read in Francis Drake's history The Town of Roxbury (1905) that Magazine St in Roxbury is so named because it lead to the local Powder House (gun powder storage, or "magazine") that was built on Pine Island.

Magazine Street, “ Powder-House Lane," formerly led to the powder magazine belonging to the State, and had a gate at the present entrance of the street. The magazine stood on what was known as Pine Island, a part of the confiscated estate of Gov. Bernard, now traversed by Swett Street, and was for many years kept by John Read.

Gov. Francis Bernard lived in Roxbury southwest of Jamaica Pond, but like many rich men of the time, owned property around town.

Pine Island is in Roxbury, and I think the strongest case would be made that Newmarket occupies space in what historically would be Roxbury, even if it doesn't much matter today and maybe its own thing in the mind of most.

We natives considered that area, from the train overpass, right up to at least “SPEEDYS” hotdog stand, to the gas stations ROXBURY. It all depends on the realtors and violence. It’s them and “TRANSPLANTS”, who has a hand in moving property lines. It happens all the time with the new stations are reporting violent crimes. You’ll see a crime committed by Franklin Park zoo and sometimes they’ll say it’s Mattapan, instead of Dorchester, Roxbury instead of Dorchester, Roxbury instead of south end, Roxbury instead of back Bay. Happens every week at least once. It’s all to change now because Roxburys property value has quadrupled in the past 20 years!
$$$$$$$$$$$$

on Pompeii St. are for Roxbury, if that helps.

And all who enter have been put in a dead end by our political elites.

If the shoe fits

I remember growing up in Rocksberry rate up the street from Victoria restaurant. As most kids we used to dibble and dabble in marijuana. Lots of these kids were forced to be hardened criminals because of racist detectives who would pounce on us over a nickel bags of weed. Make us drop our pants broad daylight to search in between our behind long after the Charles Stuart case I remember young black/brown kids getting 6-12months in prison for combined possession of weed! Now you can drive up Mass Avenue see dozens of people defecating on the sidewalk having sex, injecting each other up, all while Boston police sits there and watches them. My parents still live there. And has been for 50 years. We witnessed no crimes on our properties until the last two years. This is disgusting it’s a disgrace. People need to stand up and vote these sick politicians out, who worry about nothing but their livelihood and being elected. Things need to change. And let’s not forget about the racism in line with this. Boston is a progressive city but it still has a very long long long way to go with racism. This will never happen in Wellesley, Newton, Weston, or Brookline.

If forced to choose, I guess I prefer the latter. Is that what we’re supposed to take away?

This is what happens when all

This is what happens when all of the homeless and addiction treatment programs and jails are all in one location. Where else could these people possibly go to get any of their needs met? Yet the nimbyism all over the rest of Boston refuses to allow any of these services near their homes. So Newmarket is the only place they can go.

We should be doing better as neighbors and community members.

When you look at neighborhood

When you look at neighborhood names or what people celebrate two hundred years later it can give you pause. Imagine a hundred years in the future and they somehow have moved on from methadone. Your great grandkids could be moving into the new Methadone Mile luxury condos.

Salem with their witches. Naming districts after industry where people toiled like the Tanning District.

We see it for what it is. Please, who were the thoughtful people who called this what it is? Mayor Walsh made the car wash take down the sign that said Welcome to Hamsterdam and this was back in 2016!! The politicians will probably take your sign down and call it a day's work!

Newmarket name has been

Newmarket name has been around for a while.
I'd say "Seaport" is newer, having replaced "South Boston Waterfront" maybe 15 years ago.

An officialdom-criticizing sign proclaiming "Methadone Mile".
....
A bit milquetoast, really. With one of my frames of reference being the Piedmont St billboard in Worcester in the 80s, I'd say 'go large or go home'.