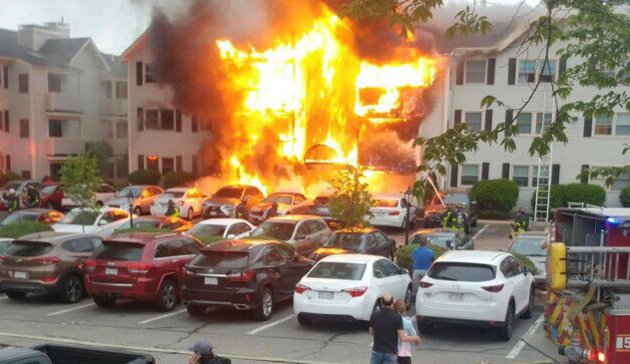 The fire. Photo by BFD.

An insurance company that had three clients living in a VFW Parkway condo building that exploded into flames in 2018 is suing National Grid, alleging the company did nothing about complaints of natural-gas odors before the fire erupted into a six-alarm blaze that displaced 36 people and injured one resident and two firefighters.

In its complaint, filed today in Suffolk Superior Court, the insurance company says National Grid - legally identified under its older name of Boston Gas - failed to maintain the equipment connecting its main to the apartment building before the fire, and that even after it learned there was a leak before the explosion failed to do anything to find and fix it - let alone turn off the gas.

The insurer also charges the utility failed to provide training to either its own workers or the Boston Fire Department on how to quickly find the source of a leak and turn off the gas that would feed the sort of fire that erupted.

The Boston Fire Department ultimatley estimated total damage from the fire at $2.5 million.

In addition to the money it paid out, Safety is also seeking unspecified damages and court and attorney's fees.

Adam can you link that complaint again?

It is going to the photo.

I had a list of two items to pick from in deciding what to upload and, of course, I clicked the wrong one.

Only $116,000 for three units? The photo seems to show much more damage than that.

The insurance company only had three customers in the building, so they're only suing for what they had to pay those people. I should check to see if other insurers are also suing.

Wondered what he was up to nowadays.