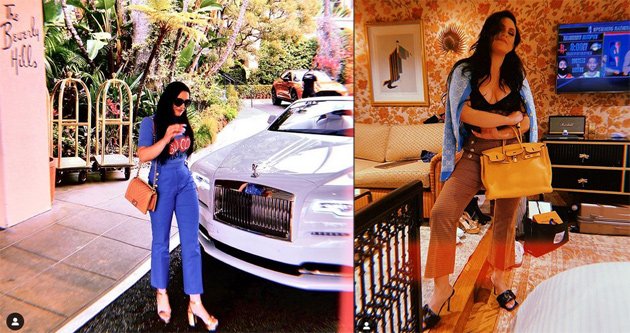 A Miami woman faces a charge of wire fraud after she allegedly used the Massachusetts MyRMV site to help create IDs in other people's names that let her apply for federal loans that she'd deposit in bogus bank accounts as she traveled by private jet and posed at fancy hotels with fancy cars that she showed off on her Instagram account.

Danielle Miller, 31, who already has a record for larceny and identity fraud stretching across five states, managed to access the accounts of 27 Massachusetts residents through the RMV portal just between Aug. 1 and Aug. 20 of last year, according to an affidavit by a Homeland Security agent on the case. She's the latest in a series of people who now face charges of trying to defraud federal pandemic programs.

The affidavit does not state where Miller allegedly got the social-security numbers required to access information through the RMV portal, but says that with them, she was able to obtain new IDs in other people's names, which she then used to apply for loans from the Small Business Administration's Economic Injury Disaster Loans, at a time when those loans were mainly geared towards small companies hurt by the pandemic.

The affidavit states Miller's fraud began to unravel in October, when an Abington resident got a $50 refund check from a Texas apartment-management company for canceling an apartment lease there. The company sent her a copy of her application, which showed she'd opened a TD Bank account.

Only problem: The resident, identified in the affidavit as L.M.S., never submitted a lease for an apartment in Texas and didn't have a TD Bank account, so she went to police, who contacted Homeland Security. When she talked to a Homeland Security agent, she said she'd also noticed that her MyRMV account listed a phone number that wasn't hers.

TD Bank records reflect the deposit of $102,400 from SBA to the TD Bank account xxx-xxx1010 on August 6, 2020. L.M.S. has reported that she did not apply for an SBA loan. Based on my training and experience, I believe these to be fraudulent proceeds of a loan unlawfully submitted under the name L.M.S.

The affidavit continues the MyRMV site was not completely porous: While Miller was able to link a phone number of it, she was unable to change the listed address - which explains why the Abington resident got the Texas apartment refund check - and so could not order a duplicate license.

Still, just 30 minutes after she accessed the Abington woman's MyRMV account, Miller used the Abington resident's name to open an online account at TD Bank. She apparently used her real phone number and Miami address to do so. Just ten minutes after that, she was on the SBA Web site, successfully applying for the $102,400 loan that was then deposited in the TD Bank account, the affidavit states.

On Aug. 4, the affidavit continues, Miller used another Massachusetts resident's MyRMV account to create another SBA loan request - which, however, was rejected as fraudulent. In total, she applied for some $900,000 in SBA loans.

She also used information about residents outside Massachusetts to successfully obtain unemployment funds from Arizona - which she had deposited in the account originally opened in the name of the Abington woman - the affidavit continues.

Miller, the feds charge, used the money to live the good life. Some of the money from the SBA loan based on the Abington woman's name went to money orders from a Publix supermarket near her home, made out to a nearby jewelry store.

On Sept. 4, she used the account's debit card to pay $2,390 for a flight in a private plane from Fort Lauderdale to Van Nuys, CA. As ID, she used a fake Massachusetts license in the Abington woman's name, according to the affidavit.

What I'll never figure out

Why do all these shitty grifters and loser con artists have "horrendously gaudy and tacky" as their personal style?

Flashy, busy, visually messy, gold beblinged crap ... and the more money they have to spend, the more real gold they use for everything, including architectural elements and toilets!

It' not just grifters and con

It' not just grifters and con-artists. Rich people buy tacky shit b/c it has someone else's initials on them all the time.

Tacky shit is the first sign someone is poor.

Me too... and I saw a lot of ugly/tacky Channel, Gucci, Hermes, Valentino, Akris, etc...just b/c it's expensive doesn't mean it's not tacky as hell :)

It sounds as if grifters and cons come in all tiers of society.

Grifters and con men and women are present in all tiers of our society. That's what it sounds like.

They all pretend to be rich, but do a shitty, tacky job of it. Even those who are born with wealth and squander it and continue to grift.

Ever stand in the lobby of Trump Tower NYC? As Bill Bryson put it:

The building had the most tasteless lobby I had ever seen --- all brass and chrome and blotchy red and white marble that looked like the sort of thing that if you saw it on the sidewalk you would walk around it. Here it was everywhere --- on the floors, up the walls , on the ceiling. It was like being inside somebody's stomach after he'd eaten pizza.”

I think it's that ability to purchase their toys and gewgaws at over-inflated prices that none of the commoners can touch. An ugly-as-sin Birkin bag that you can purchase for the price of a mid-level automobile? I'll take it, dahhhling. An evening gown that costs as much as a down payment on a house? Do they have it in gold lame? $3,000 Chrisitan Louboutins? They'll take three pairs. Jetting off to a island no one's heard about except your most exclusive inner circle? Sure thing...their limo driver has the private airport (the ones the peons can't get to) on their GPS, so getting to the Lear Jet will be a breeze.

I think it's also a huge amount of insecurity and the fear of missing out that fuels the one-upmanship - keeping up with the Joneses with a titanium credit card or a long-standing series of thefts or embezzlements. The funny thing is when people steal money, they are the first ones to overspend and bling themselves out because they think for all the injustices and abuses they've endured, they deserve the fruits of their ill-gotten gains.

All it takes one slip, one misstep, one bit of arrogance to have that whole scheme collapse. Their goodies and cash will be seized, and they will plead innocence even as they're being hauled in front of a judge in a blaze orange prison jumpsuit.

Pretty much everything on the main level of the Copley Place mall. As a wise pinhead once said: frivolity is a stern taskmaster!

Why do homes in Quebec have brick

Why do many homes in Quebec have brick, even if its just the front of the building?

Because brick is a sign of wealth.. or was years ago. If you had $$ to build with brick, you were considered wealthy.

Same with rich people. Having gold plated everything is a sign of wealth, if you can afford all of it, you're wealthy.

Its just a way to be flashy & flaunt your wealth.

Just the ones that get caught.

Can't unsee that.
She thinks she's hot - she's not.
Sure hope she ends up in jail.

Time to have a conversation with TD Bank

The bank didn't notice a large amount of funds arriving from the SBA into a newly opened account with no other activity?

This is a huuuge red flag, I am surprised TD Bank doesn't have controls for this, especially for an account that came in via the internet.

My first thought was she had

My first thought was she had a connection at TD

Charges are nice, arrest and

Charges are nice, arrest and conviction would be better.

And she still wears flood pants.

Miami people are the worst.

People talk about how rude people from the North East are, but we are saints compared to the social climbers of Dade County. Everyone who gets a couple of paychecks ahead thinks they are some kind of royalty and walk around thinking they are J-Lo or A-rod, Even worse, some of them actually are J-Lo and A-Rod.

Why did govt agencies

do better at vetting who and what is actually getting all that taxpayer money. So much grift during the past year.

This person not only deserves jail, but a reality slap.

And the hits just keep on

And the hits just keep on coming from the MA RMV!!
While Charlie is trying to make it legal for police to pull you over for not wearing a seat belt or a mask. (okay I made the mask part up).

I hope the people in charge

I hope the people in charge look into how this happened, and change the system to prevent it from happening again. It shouldn't be this easy to steal this much money just because you have a stranger's SSN.