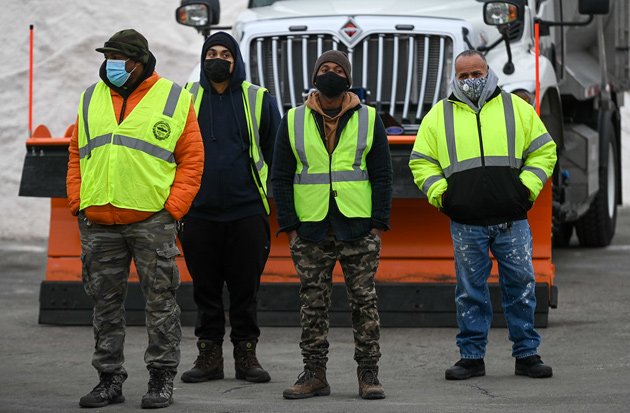 Winter better not try to mess with these Public Works guys (photo by city of Boston).

Mayor Wu held her first annual winter-preparedness press conference at the city salt pile and public-works yard on Frontage Road today, where she announced, among other things, the continuation of Boston's traditional space-saving rule: Outside of the South End, once a snow emergency's announced, you can save a street parking space for up to 48 hours after the emergency has been declared over.

In the South End, of course, space savers are never allowed, and that rule will remain in effect this winter as well, assuming we get any snow worth declaring an emergency over.

At the traditional Frontage Road kickoff to the winter season, started by her predecessor, Marty Walsh, Wu said the city has 40,000 tons of salt ready to spray all over city streets ahead of any winter storms and 164 city trucks ready to do snow battle - along with contracts to bring several hundred more private trucks to the fight. Public Works also has specialized equipment to clear snow from the city's dedicated bike lanes.

As mayors gone by have done, Wu also reminded property owners they have to clear the sidewalks in front of their properties within three hours after the end of snow - or three hours after sunrise for those overnight nor'easters and ice storms - and they have to find some place to put shoveled snow other than in the street.

The honeymoon is over.

If this is such a great idea and a great policy

Why isn't it just the law? Let's get it officially on the books so we don't have to do this nonsense every year.

Someone was shot because of

Someone was shot because of this stupid “system” a couple winters ago in Dorchester.

same as the old snow emergency.

Most working people support this . And I don’t mean people who work from home and make over 100,000k a year

A lot of kids getting out of college are making around $100k now. Time to get rid of the hate for six-figure earners.

Wow, you surveyed the whole city for this?

I'd love to see that data - please share it!

Well, since you asked

Back in 2015, when all the commenters on this website droned on about now unpopular the policy was, there was a survey, in which the policy was broadly supported.

Then we had 5 seasons of less than average snowfall, so there have been no further surveys, mainly because the issue was settled. Seeing how the “new Boston” candidate for mayor in the most recent election has now come out in support, I’d say this an issue only for the chattering classes on the comment sections here.

So much for bold vision

If we wanted more of the same old shit, we could have elected AEG.

Because I don't recall Wu running on the platform of "completely changing everything you know about Boston until it's entirely unrecognizable" though as a non-resident of the city, I may have missed a few talking points during the election.

That's how she tricked you

Remember that in 4 years when you are still paying to take the T.

I know she would like to make the T free for all, but keep in mind that she can't just flip a switch (or write a check) and make that happen. The MBTA is not run by the City of Boston.

But that's the thing

Unlike the T fares and rent control, the space saver rule is 100% her decision and policy.

This is one of the few things she really has total control over.

And if she really likes this rule

she had several years as a city councilor to try and get it put into the laws of the city. It's honestly pretty disappointing to see that she's continuing this dumb end-around.

I voted for AEG- but I agree with Mayor Wu on this one. Thank you, Michelle! Save the Space Savers!

It's pointless and cruel to

It's pointless and cruel to have a mask requirement for people working outdoors.

when it's cold out, a good cloth mask is actually pretty comfortable. I'll probably keep wearing one during the winter for a while.

We're on a weird tangent but

We're on a weird tangent but personally I think masks are great! They keep your nose warm in the Winter and Fall and they block most types of pollen in the Spring and Summer.

Did anyone else see the pic of space savers out for that little dusting we got last week? 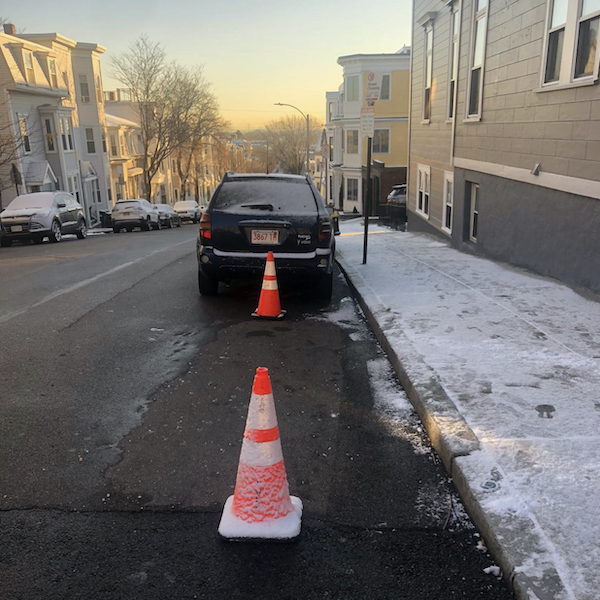 I found it on Caught in Southie.

Last time I was in Southie that wasn't the beach

I hosted trivia at Roza Lyons, and among the participants was a couple where the guy was wearing something pro-Trump.

are the Commonwealth's masking requirements. And the City of Boston's: https://www.boston.gov/news/new-mask-mandate-frequently-asked-questions

Complaining about non-existent rules is a pointless and cruel waste of valuable bits.

Watch the start of Wu's

Watch the start of Wu's presentation and observe how all the people wearing boots and a high-viz vest also have a mask on. That's like 10 out of 10 people. Do you seriously think that was voluntary?

SCIENCE AND COMMON SENSE ARE BEING MEAN TO YOU!

Seriously - I'd like to see you wear pantyhose, skirt, and heels like many employers used to require! All day, standing behind a counter.

Masks are far more comfy than even a goddamn bra is! Sorry you are such a little snowflake.

the boots and hi-viz vests are voluntary too? Should we be getting rid of those policies as well?

Your life would probably be less

full of baseless outrage if you didn't go around making up stuff to be baselessly outraged about.

Maybe Mayor Wu anticipates folks shall readily get outside and shovel out so quickly that the effects of time dilation take hold and the problem just relativistically takes care of itself...

Plus or minus a few tire-slashings and temporal paradoxes...

I look forward to saving the spaces ….

…. out in front of my building in case anyone comes to visit during a snow emergency and needs a spot. Not likely but I do enjoy shoveling.
It’s a great workout. I’ll bring a thermos so I can sit in my beach chair, feed the pigeons, toast Michelle ”I’m the new Car Guy” Walsh with hot chocolate and appreciate my handiwork. Maybe even make a few dollars renting out my spaces.
Jolly good fun!

plenty of other cities that get even more snow than us have figured out how to handle it: Ban parking on one side and plow, then have everybody move their cars and plow the other side.

but of course this is Boston so GOD FORBID we look beyond the city limits for how to do things.

Boston used to do that, too.

Boston used to do that, too. After really severe snow emergencies, they would ban parking on the odd side in odd years and even side in even years. But, the last time they did that was around 20 years ago. Even in 2013 they didn't do it. Boston has gotten so many cars it would have cause too much mayhem.

Is that a photo of the

Is that a photo of the Snowplow League from Oz?

I guess the streets of Boston will remain the private property of Five-Car Flaherty and friends.

Outside of the South End, once a snow emergency's announced, you can save a street parking space for up to 48 hours after the emergency has been declared over

We can continue to look forward to space savers coming out during light flurries and continued instances of partially shoveled out spots littered with lawn chairs.

Is it historical enough now that Beacon Hill residents can't complain about the eye sore of trash? Or is this less common there?

I've been living on the north slope of Beacon Hill for a long while and I've only seen space savers after a storm a few times. They do come for construction a lot more.

Actually, what is more annoying is for a big storm people put their cars in garages. Then the spaces they leave empty fill up with snow and are unusable for a few weeks.

Did the mayor take the T to

Did the mayor take the T to this theater or was driven there by BPD?

Dude, I know you're "Notfromboston," but at least have someone at the troll factory get you up to date on who Michelle Wu is. Your troll script is at least 2 mayors old.

She wants to get reelected

And she knows how many people are in favor of space saving after shoveling out their car, if it wasn't popular she would eliminate it.