National Grid was notified four times about a gas leak and did nothing before fire that destroyed West Roxbury condos and melted parts of cars, condo trust says 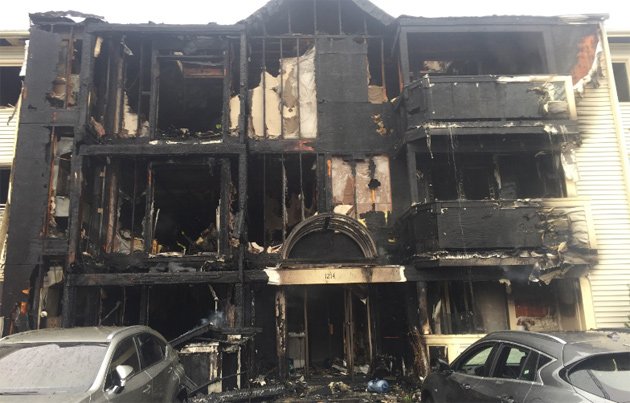 The trust that oversees a West Roxbury condo complex yesterday sued National Grid to recoup its expenses to rebuild from a six-alarm fire in 2018 it says was fed from a National Grid main and connection it charges the company refused to repair despite repeated reports of a gas odor dating back nearly two years.

The trustees of the Park Place Condominium Trust filed their suit in Suffolk Superior Court, where an insurance company that had insured three residents of the complex off VFW Parkway filed a similar suit last week to get reimbursed for the claims it paid out. Separately, several condo owners today filed a similar suit, also in Suffolk Superior Court.

The suits come about six months after a report by the state Pipeline Safety Division concluded that while a "service tee tapping cap" at one of the buildings was leaking about a cubic foot of gas an hour before the fire, "the source of ignition and contributing factors could not be determined."

In its complaint, however, the trustees allege "negligence, carelessness and negligent omissions" of the company and its employees created ""abnormally dangerous ultrahazardous activities" - an initial explosion and the fire - and that the company had made things worse failing to train Boston firefighters on how to turn off a gas main, leading to even more damage as firefighters had to wait for National Grid workers to arrive to turn a shutoff valve.

The trustees allege that residents first reported "a strong smell of gas" in the area of 1214 VFW Parkway in 2016 and that, despite at least four visits from National Grid workers, the source was never found and the smells continued. The complaint continues that the odors were particularly pronounced "in the days prior to May 12, 2018" - the date of the fire - and that residents of 1214 reported them to the company.

The fire and water damage completely destroyed 12 units at 1214 VFW Parkway and made 7 units at 1216 uninhabitable until they could be repaired, the trust says. Some 36 residents were displaced.

The trust is seeking to be reimbursed for repair work not covered by insurance as well as for damages and attorneys' fees.

Even when they don't cause

Even when they don't cause fires, gas leaks are a huge environmental problem. Methane is a really strong greenhouse gas. The gas company doesn't care about fixing leaks, and usually ignores it when people complain about gas odors outside. They just adjust their rates to keep making a profit despite the wasted gas. The state needs to step up and make them fix the leaks.