Two Nigerians laundered money from Covid-19 scams through somebody they snared in a romance scam, feds charge 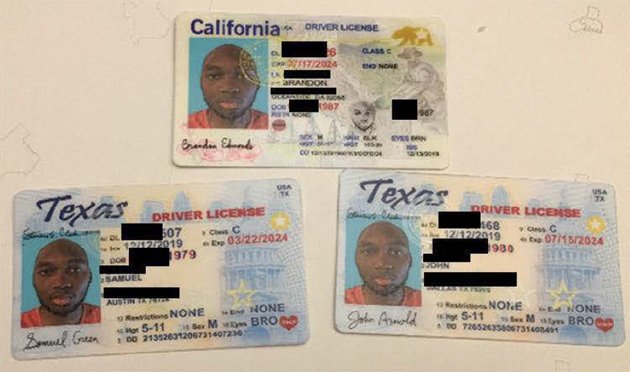 Some of Adepoju's fake IDs, from federal affidavit.

Federal officials charge two Nigerian natives living in New York City used fake IDs to suck out money from the Massachusetts unemployment system and a federal disaster loan program - some of which they then tried to launder through transactions with an elderly man they met through Facebook, who had bought their story they were actually a young fitness instructor from Texas.

A federal complaint unsealed this week only names one of the two men, Damilola Adepoju, because the other man remains at large; federal complaints typically only name people after they have been detained. Adepoju was formally charged with wire fraud, conspiracy to commit wire fraud, aggravated identity theft and money laundering.

According to an affidavit by an FBI agent on the case, the two men hatched a plan last year to obtain Pandemic Unemployment Assistance payments and an SBA Economic Injury Disaster Loan by using fraudulently obtained IDs to apply for payments. They took advantage of a quirk in Google Mail: Unlike other mail systems, GMail does not recognize periods or dots in user names, so they were able to use numerous variants of one particular GMail address to apply for multiple payment accounts with just one inbox by switching around where they'd put a dot in the user name for the unemployment payments.

They picked Massachusetts because the state is "a rich state," according to the affidavit, which adds, however, that they also submitted bogus pandemic unemployment claims in 14 other states as well.

The investigation has identified over $600,000 in actual or attempted losses from fraudulent unemployment and EIDL payments.

The affidavit continues that the two have used the Google account since 2014 to pose as a female "fitness coach," using photos snagged from an actual female fitness coach in Texas with a similar name. In total, they've reached out to some 300 men online, the affidavit states.

In substance, these chats show that after building rapport, some individuals are solicited into providing personal information, bank account information, and ultimately financial assistance in the form of mailed cash, MoneyGram payments, and virtual gift cards.

The affidavit then details how the two allegedly tried to launder both money from unemployment and a $115,900 EIDL loan with the inadvertent help of an 86-year-old man in South Carolina they'd first met through the ruse in 2015.

In June 2020, according to bank records from Greenville Heritage Federal Credit Union, Victim l's account there received deposits of fraudulent unemployment funds. The bank's records also show that in July 2020, Victim 1 deposited a $117,532.38 check into his account. Victim 1 told me that both the check and unemployment funds came from "Vicky," who told Victim 1 that the money had something to do with her fitness business. At "Vicky's" direction, Victim 1 took cash out of his account, and on or about August 17, 2020., sent it by Fed.Ex to "Samuel . ," 542 East 79th St., Apt. 2N, New York, New York. "Vicky" led Victim 1 to believe that - was Vicky's roommate.

At the time, Damilola lived at that same address, but in the apartment directly above "Samuel."

In August, 2020, the South Carolina man sent "Vicky" an urgent message - that his bank had identified at least one of the transactions as fraudulent and that the government wanted to be repaid the money, which he didn't have, or the feds could take his house.

According to the affidavit, the conspirator who is still at large then texted Damilola:

So sad.
I wanna go get high and wasted.
But at least we got something.

The two are the latest in a string of people charged in federal court in Boston with taking advantage of federal Covid-19 programs, including a Beverly pizza-place owner charged with using payments for non-existing workers to become an alpaca farmer, a man also charged with getting a loan to support workers he didn't have and a woman charged with using a flaw in the RMV online system to apply for federal loans.

Topics:
Crime
Free tagging:
Coronavirus
Ad:
Like the job UHub is doing? Consider a contribution. Thanks!

were they the same nigerians

were they the same nigerians jussie smollett hired ?

Racists comments but you okay with it now?

not sure where this is racist...

just cleverly quipping that the suspects of the two silly planned crimes are similar.

i'm black by the way in case it matters.

Really Adam!? You left out

Really Adam!? You left out the easiest jokey headline you have been served up in ages!

As someone who has been victim of the rampant COVID unemployment fraud (not by these princes of thieves), I at least want a laugh out of this whole mess.

I would only send money to a Nigerian prince!

He's not even wearing a crown in the ID photos.

Dammit! He promised to lower my credit card interest rate,

get me a 100 year car warranty, free solar panels, fix my windows update problems and send me that 15 million my dead relative left me.

He was busy fixing my mom's nonexistent computer, so he couldn't get to your stuff.

Kinda surprised when I hear these go so far...

I'm a weird target for these love scams.. especially on the apps (particular apps that have older guys like me). I often get msg'd by "military men" who are being shipped off to Afghanistan or some far off mission. The profile is usually one to three pictures of same guy. (sometimes its not.. which is funny). Location is vague, usually a state.. but they can't seem to tell you much about where they are (except its 'a base'),

The english isnt the best. When you read it with a nigerian in mind on the other end, the grammar and such are very inline with english dialect.. not for a profile with a pic of a white dude with blonde hair who says he's from Florida.

They always come right out and tell you that it was love at first sight and they had a 'sign from God" that you were the one. (no, not kidding.. this is almost the giveaway now.).

I've been in the gay dating scene for.. oh... 30 years. I've never had someone come right out and say that right off the bat. And any gay guy knows, if someone says that and you have no prior history together (i.e. friends or even a stalker)... yeahhhhh you might want to stay clear.

Also the use of God (and other religious based comments) Most gay folks who are religious know to be courtesy of others and NOT do this. (unless you were at a Christian Gay Singles get together or something).

Once they got you and you start to chat a bit, you'll quickly realize they want to abandon what ever you met on and move to Google Chat or some chat service. You can't see their number (if its Google), nor location data.

You'll also quickly notice they won't send any more photos, or if you can coax one out.. its usually a body part or a shot with no face. But most of the time its a chore to get more pics.

And then the sex thing... its very common for gay men to have sexualized conversations over chat. Most of these guys.. its clear.. they've never had gay sex before. It seems like they struggle with what to say, and it ends up coming out like a page from a Harlequin Novel. So gross so sticky sweet so romantic.. blahhh. I want piggy.

And if you think this is all odd, just wait till I tell you about the requests.

The whole point of this scam is a confidence game. Build your confidence so you will do things for them. It starts off small, sending small packages, or small amounts of money. But as the time goes on and the relationship grows, the asks become more and more.

I've let them get me to the small packages game. I won't send anything.. but I have a whole folder of pictures I've taken of products these folks have asked for. I send them along to get them to think I'm going to mail them. I even "print up" shipping labels.. (photoshop is a wonderful tool)

At some point, I end the game. Usually its around the time I said I am going to send a package. I magically get a cousin who just returned from Afghanistan and mention about sending packages, and he advised me not to send it. (the cousin story is all false, but the DOD has a bulletin about this type of scam)

Usually this all ends with some F-bombs (this is after weeks of never hearing a swear word out of this person), and being blocked on whatever chat app we are using pretty fast.

Now you may ask.. why the f**k would you even do this if you know its a scam.

OK jokes aside, these scammers sit in internet cafe's in nigeria to start this scam. Often they are working several people at once. So they are paying to use the internet cafe. Every moment that they are wasting with someone like me, is money lost because they aren't scamming someone else. In the end, the weeks of talking to them and having them try to coax me to send stuff.... just cost them a whole boatload of money.

It's just interesting to see how far these go, like the case at hand. They go pretty far. There are alot of lonely people in our country. And having some cute built adonis come at them like this is appealing.

PS - I know I know far too much about this and wrote too much. the topic tickles me because it happens so often to me. I just waste their time. (I also work in security and there's tons of stuff out there about this scam)

I always enjoy Cybah's posts on these matters. Thanks.

for so diligently wasting their time so that they can't prey on someone less savvy. :-)