Not one of the playing fields of Eton 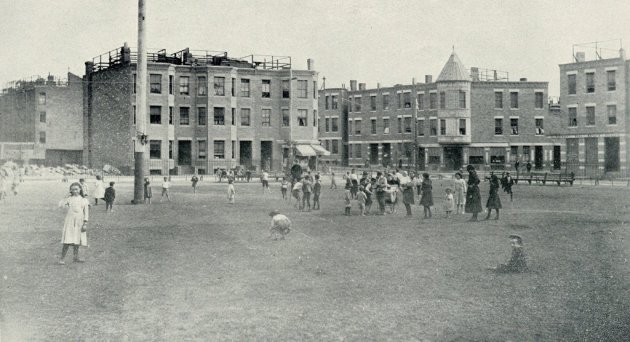 The folks at the Boston City Archives wonder if you can place this scene (which, yes, was in Boston). See it larger.

Yes, there was actually a park where Madison Park high school is now. Urban renewal sent that packing.

Similar, but the corner above

Similar, but the corner above Giovanni's doesn't have that neat pointed witch hat. Plus the photo shows a flat building facade, while what's on that block now has bays that look original.

you can see teddy roosevelt in the window.

Thanks for playing, folks! This shows the Fellows Street Playground in the SouthEnd in 1901. It bordered Fellows St and Hunneman St.

I WONDERED what that large pole was in the old photo.

(Not sure if this is the same playground, but it is on Fellows St.)

According to the Bromley atlases, the building with the conical tower was 87 Hunneman St., and the three buildings at left center were 102-106 Fellows St.

The site today would be under Melnea Cass Boulevard.

Fellows St. used to go all the way to Webber St., which is still there today.

I’ve noticed in a lot of

I’ve noticed in a lot of photos of old there are often cages or high fences on some of the flat roofed buildings. Does anyone know what the fencing was for? Were the rooftops used by children for recreation?

were there so you wouldn’t fall off the roof.

Since until well into the

Since until well into the 20th century the typical second, third (fourth, fifth...) floor porch only needed at most a 24 inch high safety railing, I doubt keeping people from falling off a roof was the only reason for those high fences. I was wondering what common rooftop use would’ve required such a fence on the tops of so many buildings.

Years ago I lived in an old Cambridge building that, for knowledgeable residents, provided rooftop access. Instead of external fire escapes, there were internal stairways, one on each side of the building, that were in addition to the front stairs and hallways. Our kitchen had a door into this back stairs, and from there you could go to the roof, the basement, or exit safely to the outside at the first floor. (The stairway was also surrounded by a brick firewall.)

When you went up to the roof, there was a wooden platform, which was the limit of where you were supposed to go. The roof was flat, but if you went off that platform, you'd be stepping directly on the tar roof, potentially damaging the roof and creating leaks. So you were supposed to stay on the wooden platform. The platform was also set back maybe 10 or 15 feet from the roof edge, to keep you from getting too close.

I don't remember a wooden rail around the deck of my building on Brookline Street, but it certainly would have been logical. The railings in this picture remind me of the platform on top of my old building, except that they are closer to the edge. But then, these buildings are smaller than mine.

One of my roommates then had a clothesline set up on the roof deck and we used it in good weather. I'm guessing that would have been a primary use for those decks in the late 1800s and early 1900s.

People weren't really into sunbathing in those days, so that wouldn't have been a likely use. But I used to be into it, in my younger days before I worried about melanoma, and I spent time on that rooftop on sunny days. In fact, that's where I was, with my portable radio, when I heard the news that Richard Nixon was resigning.

In the pre air conditioning days

Families would sleep on roofs. My theory is that the cages were for safety of the little ones.

clothes yards. There was not enough real estate on the ground for people to hang wet laundry in apartment buildings like three deckers and single or two family houses. They were covered with wooden pallet-like features to keep wear and tear from the roof covering. Debris would fall between the wooden slats and a careless smoker might accidentally ignite that stuff during prolonged dry spells.

Looking at the girl sitting

Looking at the girl sitting by herself in the field in the lower right section, it reminds me of Christina's World.
I guess Andrew Wyeth was just a ripoff artist, didn't have an original idea... < /s >.