Old World fish that can wriggle across land hooked in Canton 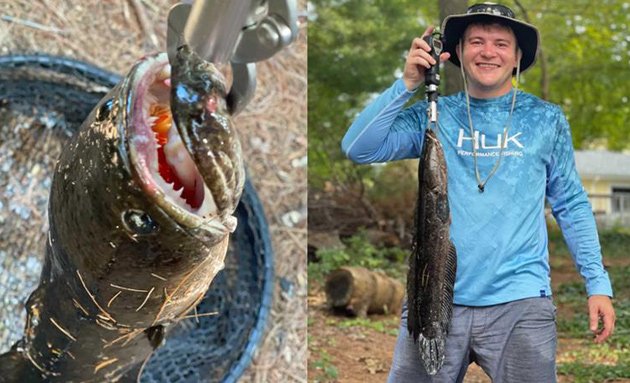 MassWildlife, a.k.a. the Division of Fisheries and Wildlife reports somebody caught a big ol' northern snakehead fish in Reservoir Pond in Canton on Aug. 27.

Snakeheads don't belong in Reservoir Pond, or anywhere else in North America, but sometimes wind up in local ponds and waterway when homeowners release them after the buy them for their aquariums and then the fish get too large, the division says. The Canton fish is the fifth confirmed one found in Massachusetts since 2002.

In addition to eating everything around them, the fish can breathe air, which lets them cross land for as long as four days as they wriggle across the ground, moving from one pond to another.

The state reports that, so far, all of the snakeheads found in Massachusetts have been adults, with no evidence they've successfully bred here.

Snakeheads will go after bait and lures, and with nearly 200,000 anglers out on the water, the fact that so few have been caught in the Commonwealth is reassuring.

Still, the division says it's illegal to release non-native fish into local ponds and rivers and tells aquarium owners to knock it off - and to stop releasing piranhas while they're at it.

Resource managers are concerned about the potential for snakeheads to reproduce and become established as a significant component of the fish community as a top predator, as they have in other states such as Maryland.

Anyone who captures a fish that can be confidently identified as a snakehead should keep the fish, kill it, and report it to MassWildlife by emailing [email protected] or calling (508) 389-6300.

Neighborhoods:
Canton
Ad:
Like the job UHub is doing? Consider a contribution. Thanks!

New Invader on the Block

…now, there’s a new invader on the block: a ferocious fish with a massive appetite and razor-sharp teeth. It may even walk on land—the snakehead.

This National Geographic segment on the sneakhead is enjoyable for its over-the-topness (especially the first 30 seconds), and it’salso informative.

Is it tasty?
Yes.

I repeat, do not take them to a movie.

Can you take snakeheads on a plane?

I don't think those razor-sharp teeth would be allowed under current regulations.

In other Canton news

The Blue Hills Reservation keeps catching on fire
Boston Latin School losing another administrator
Mansfield woman charged with driving into off-duty Boston cop in Canton, then leaving him to die in the blizzard
Investigation continues into death of off-duty Boston police officer in the blizzard in Canton
Starting Monday, you're going to want to wear bright orange in much of the Blue Hills, because hunting arrows hurt like the dickens
Court backs country-club workers in case over who gets the 'service charge' levied for events