Once again, federal court tells West Roxbury man that no, he can't fly a Christian flag over City Hall Plaza 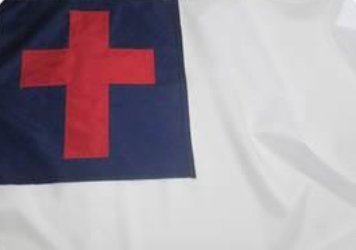 The flag in question.

For the second time in 18 months, a federal appeals court in Boston has told Hal Shurtleff that he has no right to raise a flag with a large cross on it over City Hall Plaza.

As the US Court of Appeals for the First Circuit ruled in 2019, and as a federal district court judge has ruled as well, the three 83-foot high flagpoles in front of City Hall are not a "public forum," where the city might have to let Shurtleff raise a flag with a cross on it but are instead a place reserved for the government itself to express itself.

The court acknowledged that the First Amendment requires government to be "neutral" towards religions, but said Shurtleff failed to provide any proof that this somehow means the city has to let him promote his own brand of Christianity from a city flagpole, that, in fact, "the exclusion of religious entities from a public program, without more, does not violate the Establishment Clause."

Shurtleff's Florida-based lawyers said they will appeal the ruling to the Supreme Court.

In its ruling today, the appeals court acknowledged facts that Shurtleff had dug up since he first sued in 2018 - that the city had approved all 284 flag-raising applications it received between 2005 and 2017 and that the city only formally added a ban on explicitly religious flags after Shurtleff sued in 2018 - but said those didn't help his case at all.

And that's because the flagpoles are not similar to City Hall Plaza, where events are routinely held that people know don't necessarily reflect the views of the city government, including political rallies and ice-cream samplings - or even the event that Shurtleff himself wanted to hold there to express his views on the Constitution and religion.

In contrast, the flagpoles, whose flag-raising cranks are under the control of City Hall functionaries, are specifically for "government speech," where whatever is flown from them is assumed to have the explicit approval of city officials.

The court noted that, even without a formal policy on explicitly religious flags, the only flags approved by a City Hall functionary were all "the flags of countries, civic organizations, or secular causes."

Here, the three flags are meant to be - and in fact are - viewed together. The sky-high City Hall display of three flags flying in close proximity communicates the symbolic unity of the three flags. It therefore strains credulity to believe that an observer would partition such a coordinated three-flag display (or a four-flag display if one counts the POW/MIA flag) into a series of separate yet simultaneous messages( two that the government endorses and another as to which the government disclaims any relation). ... Although the plaintiffs might perhaps make the case that a lone Christian Flag, nowhere near City Hall, would be seen as devoid of any connection to a government entity, a City Hall display that places such a flag next to the flag of the United States and the flag of the Commonwealth of Massachusetts communicates a far different message to an observer: that the City flies all three flags.

Yeah, so what about the Portuguese flag, which has symbols related to the betrayal of Christ, or the Turkish flag, which bears a crescent, Shurtleff's Florida attorneys rebutted: Aren't those religious symbols? As it has said before, the court said the city approved those flags as symbols of particular countries to honor them or local groups of residents from those countries, not to promote religions.

We find the rate of rejection unpersuasive because the exercise of the authority to reject is necessarily case-specific and limited by the kinds of requests the City receives. Since the City had never rejected a request, the flag-raisings in the record are, in effect, a record of the requests received. Every request has been for the flag of a country, civic organization, or secular cause. That potential applicants have successfully self-selected and offered a narrow set of acceptable secular designs cannot be evidence that the City is open to fly any flag.

The court did lay out a possible way for Shurtleff to change this:

Should the citizenry object to the City's secular-flag policy or to its ideas about diversity, the voters may elect new officials who share their concerns. ... After all, it is the electorate and the political process that constrains the City's speech, not the Free Speech Clause.

However, the court did not offer any suggestions as to how Shurtleff, a member of the West Roxbury Republican Ward Committee and a former member of the John Birch Society in a city that overwhelmingly votes Democratic, might achieve that goal.

The ruling by the three-judge panel, authored by Judge Bruce Selya, begins with a quote from Lawrence "Yogi" Berra:

This case comes before us for a second time, albeit in a different posture. The issues are much the same,though presented in sharper focus on a better-developed record. As such, they conjure up what might be described, in a turn of phrase popularly attributed to Lawrence "Yogi" Berra, as a sense of "déjà vu all over again."

That section ends with a footnote acknowledging there is some doubt that Berra actually said that, along with a link to a relevant text.

Should be dismissed with prejudice

Hal is grifting off of these cases

I think this is it, at least in Boston

The earlier cases involved things like preliminary injunctions before his case came to trial, before the judge finally agreed with a motion from the city to just dismiss the whole case already, which Shurtleff, of course, appealed, leading to today's decision, which, naturally, he will try to get before the Supreme Court now.

But I don't think he's doing it for the money, or even necessarily paying anything (or much) for his representation - since his lawyers are at Liberty Counsel, which is sort of an anti-ACLU.

For all of Hal Shurtleff's faults, he's in it for the long run.

how far has he thought this through?

Does he want to set the precedent that the Boston City Hall must display the symbols of non-monotheistic religions? Or the Saudi flag, which is a text from the Koran?

I suspect he's one of those people who thinks "freedom of religion" applies primarily to Christians, and means that the government can't tell him which page of the hymn book to turn to this week.

"anti-ACLU" is a quirky term

"anti-ACLU" is a quirky term considering what the ACLU has devolved into, which is an organization that frequently seeks to protect its constituency, at the expense of its original mission was was civil liberties in general.

The real solution to this flag issue is for the city to get out of the business of advertising (using city property) exclusively for groups that city officials approve of. Just put up the US, MA, and city flags and leave it at that. Do that, and the entire controversy goes away.

Where did he find that ? I

Where did he find that ? I've never seen a Crucifix like that before with bold cut out lines and red and blue colors. Maybe that's why he can't get approval.

A crucifix depicts Christ on the cross. That there is just a cross.

I gather it was created in 1907, and in some churches people have been "pledging allegiance" to it.

He's setting a terrible example. As a Christian I have to say his flag is sad .

I agree with you. Real Christians don't need flags.

Like the worship of the Golden Ass that seems to be abating for now.

A lot of national flags have religious symbols on them

The Greek flag has a prominent cross.

The flag of the Vatican features the triple crown ("Triregion") of the Pope and the keys of St. Peter.

The flags of Pakistan, Tunisia, Malaysia, Libya, and Mauritania, in addition to the Turkish one, feature the crescent of Islam.

The South Korean flag features the yin-yang symbol of Taoism.

The rising sun on the Japanese flag probably represents Amaterasu, the sun goddess who is the legendary ancestor of the Emperor.

Those are the ones that come to mind immediately; doubtless there are others.

I forgot the Star of David on the Israeli flag

... and the inscription on the Saudi Arabian flag, which reads: "there is no god but God; Muhammad is the messenger of God."

The symbol on the Iranian flag is a stylized rendition of the Arabic name "Allah", which is a contraction of words that mean "the god".

He and Louis Murray Junior are literally the Abbott and Costello of local GOP nut jobs.

Seems to fit in well with these

From Monty Python and the Holy Grail: 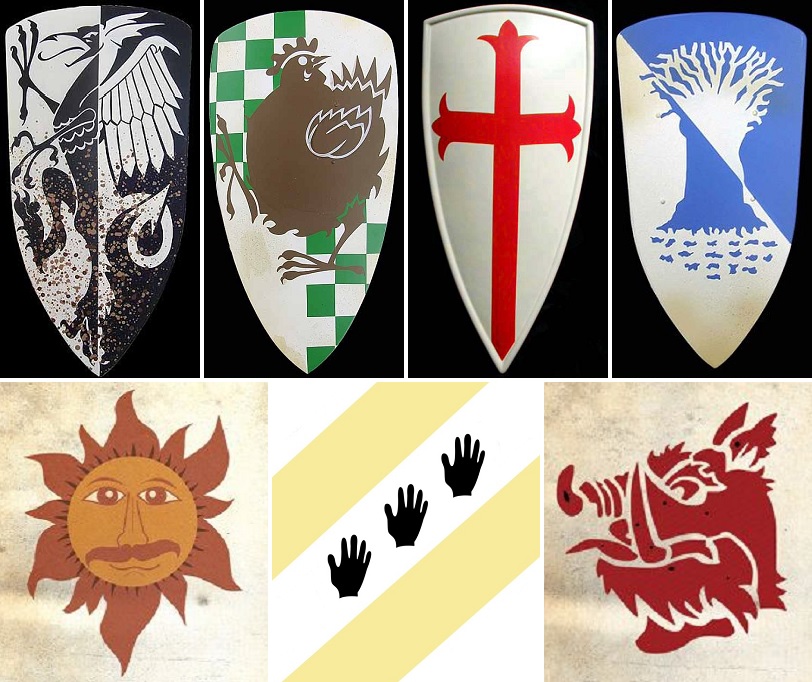 "Thou shalt keep thy religion to thyself."

George Washington's administration negotiated a treaty with the Muslim rulers of north Africa that stated explicitly that the United States was not founded on Christianity. The pact, known as the Treaty with Tripoli, was approved unanimously by the Senate in 1797, under the administration of John Adams. Article 11 of the treaty states, "[T]he government of the United States is not, in any sense, founded on the Christian religion…."

The government of the United States is not, in any sense, founded on the Christian religion...