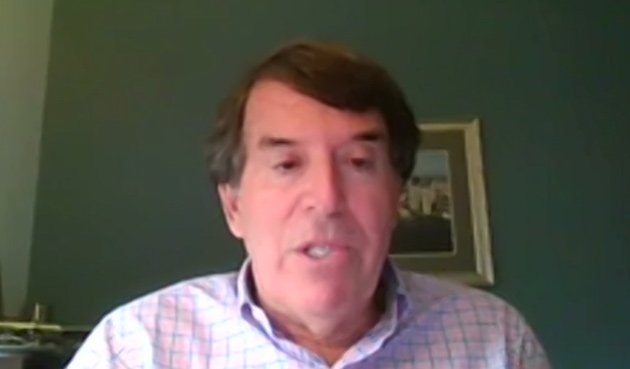 Percelay: Says he couldn't believe what he was hearing.

After listening to numerous residents of the South End's Concord Square neighborhood complain about drug dealing, people on the front steps passed out on the front steps or angrily shouting at nearby residents, broken glass and cigarette butts tossed into neighboring yards, the CEO of the company that now owns the 16-room lodging house at 44 Concord Sq. declared himself stunned - and vowed to get to the bottom of it all.

"I don't like having people who are angry at us who feel that we've wronged them," Bruce Percelay of the Mount Vernon Co. in Allston said yesterday at a Boston Licensing Board meeting on Zoom, which the board called to air complaints from the square's more permanent residents.

Percelay added, though, that this he wishes residents had contacted him or his company first before going to the licensing board with "an avalanche of complaints that I certainly literally knew nothing about."

"We're as transparent and as open a book as there is here in this business," he said. "Where there's smoke there's fire, I suppose. ... We want to solve this, we want to be a good neighbor."

Residents say they have long co-existed, happily even, with the lodging house, which Mount Vernon bought about seven years ago. In 2018, one resident said, she even rented some rooms there for out-of-town guests coming to celebrate her daughter's graduation from Boston Latin School. Other residents talked of sitting on their stoops - a popular Concord Square pastime in nice weather - and chatting with people staying there.

But residents said that Mount Vernon no longer runs the lodging house in its traditional fashion as a place for young professionals to stay for a month or two after getting a job in Boston and that, especially since the pandemic, it now runs it as an Airbnb, catering to people looking for very short stays, a fair number of them "shady characters" who are into drug use or sales, which, they say, threatens to turn the block of brownstones into an extension of Mass and Cass. Lodging houses are exempt from the city's ban on investor-owned short-term rentals.

One resident spoke of people "staggering out of there stoned out of their minds or otherwise somehow impaired."

Another resident, who lives right next to the lodging house, says he now regularly finds broken glass and cigarette butts in his yard after nights of "screaming and yelling," that he and his wife have to keep their windows shut to keep out the cigarette and marijuana smoke wafting from the building and that he now has concerns just "taking my kids out there after the dark to hang out in our yard" - and when he goes on business trips.

"It's the first time I've felt uncomfortable in the South End," he said.

Another resident said she was sitting on her stoop with her four-year-old son last month, just enjoying a nice day, when a woman pulled up and started "pulling a lot of stuff out of a car." The woman saw her and yelled "What the hell are you looking at?"

"We don't expect suburban Pollyanna whatever," but neither is Concord Square an extension of Mass and Cass, another resident said.

"This is the very first time in 25 years that we've ever seen this level of disjointed operations in a lodging house," Stephen Fox, chairman of the South End Forum, which represents neighborhood groups across the South End, said. "There's something fundamentally wrong with this particular location," he said, adding that might be because it's no longer run as a lodging house but as "a night to night hotel."

Percelay acknowledged that Mount Vernon, like other companies with rooms to let, dramatically lowered rates last year just to try to bring in some revenue during the pandemic. "We lived through something in the pandemic that was brutal," he said. The company, which also owns the Revolution Hotel on Berkeley Street, was "getting crushed."

"I can hear the anger in your voice," he continued. "If you knew us better you'd know we don't play games. This fortunately is somewhat of a foreign experience for us."

"We're not mind readers," he said, and residents need to contact him or Mount Vernon to discuss the issues. "We need to know there's a problem," he said.

Residents retorted that maybe if Mount Vernon, which does not have a full-time staffer at the lodging house, had done what they did and installed cameras on their property, they would know what the problems are.

Licensing Board Chairwoman Kathleen Joyce tried to end the hearing on a positive note. "It sounds like we have a very active community here and an operator who takes pride in his reputation and his job," she said, urging the two sides to keep talking.

There are still lodging

There are still lodging houses? And only "those type of people" use them?

There are at least three in the South End alone.

And to answer a question I need to put in the story: Yes, Boston has a ban on investor-owned short-term rentals. But lodging houses are exempt. There have been some cases of investors trying to open "executive suites," which are basically lodging houses with a fancier name (and higher daily rate), but so far the zoning board has been mostly seeing right through those and not allowing them.

Pine Street Inn operates them, rather successfully, across the Boston metro area.

“Percelay added, though, that this he wishes residents had contacted him or his company first before going to the licensing board with "an avalanche of complaints that I certainly literally knew nothing about."

Well there’s part of your problem right there

Yeah, but doesn't that sound

Yeah, but doesn't that sound suspicious? Seems to me like this company wasn't exactly asking for feedback. No reception staff & no security cameras for what is basically a hotel.

I wonder how difficult it is to find contact information.

If it's easy to find and use, then he might have a valid point.

Residents retorted that maybe if Mount Vernon ... installed cameras on their property, they would know what the problems are.

It's bizarre that an investor operates a $2+ million lodging house with 16 rooms and doesn't yet have security cameras everywhere.

Did you hear about the explosion at the lodging house?

Walking into the barber shop and asking for the Alan Patridge.

A lot of not very credible statements….

…. from both sides. Including this one “ "It's the first time I've felt uncomfortable in the South End," he said”.
Poor baby!

I can't believe people are stumbling around drunk and/or stoned and someone is taking their stuff out of a car AND bringing it into a lodging house. These are the reasons why absolutely no one from the city takes South Enders seriously.

Bruce: "Why didn't you tell

Bruce: "Why didn't you tell me?"
Neighbors: "Why aren't you aware of what's going on in your property?"

Insurance companies don't have to pay for South End property owner's decade-long battle against neighboring condo building, judge rules
Man who picked up and helped kill a Combat Zone prostitute in the 1990s is still picking up prostitutes, allegedly
Man arrested after plunking himself down in South End lobby with a loaded gun in his waistband, under his camo bullet-proof vest, police say
Wu orders pause in Mass-and-Cass de-tenting
State to set up temporary housing for Mass/Cass homeless at Shattuck Hospital campus in Franklin Park
ACLU sues to block further Mass and Cass de-tenting without better housing and treatment for tent owners