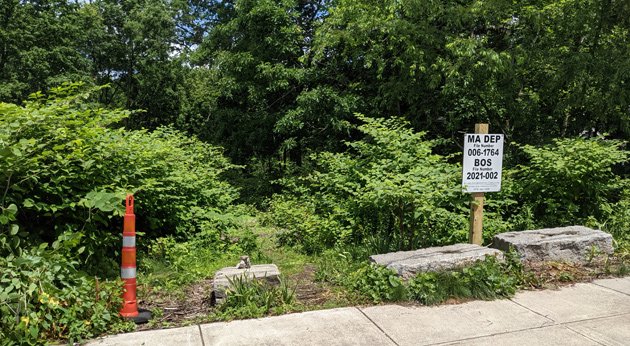 One of several currently rough-hewn entrances to the wetlands, on Coniston Road.

The BPDA holds a public meeting Thursday on proposals by two developers for four affordable condos at 104 Walter St. - a component of plans by the city to upgrade and enlarge the 10.5-acre Roslindale Wetlands Urban Wilds that sits behind Walter Street.

As part of the project, the BPDA bought 104 and 108 Walter St. last year, using a $387,000 state wetlands-preservation grant. Last week, it formally handed over ownership of 108 Walter to the Boston Conservation Commission, which will use the land to create a new entrance to the wetlands, along with similar entrances on several other streets, including Coniston Road and Weld Street.

The entrances will pair up with new paths and boardwalks through the heavily wooded area, which is a wetlands mainly because it is the end point of a BWSC storm drain that collects runoff from Peters Hill in the Arboretum. Also planned at part of the $500,000 city upgrade: The elimination of invasive trees and shrubs and their replacement with native plant species. A report by a consultant (scroll to "Project Narrative") has more details on what's planned.

The project is a victory for nearby residents, who organized after the owner of 104 and 108 Walter proposed as many as four two-family houses and 16 parking spaces.

Long before that, though, much of what is now the wetlands was once slated for development - The Google Map for the area shows only a relatively small parcel marked off as the Roslindale Wetlands, with the rest still showing paper roads and proposed house lots. Most of the lots, however, fell into foreclosure and, after a campaign by the Longfellow Area Neighborhood Association, the city bought most of them in 2003 and 2005 to create the bulk of the urban wilds area - now under the control of the Conservation Commission.

Norfolk Construction and Design of Stoughton and Habitat for Humanity both submitted proposals for the Walter Street property.

Norfolk's proposal calls for renovating the existing house on the site and construction of a new three-family building, all to be sold to families making up to 100% of the area median income.

Habitat for Humanity's proposal calls for renovating the existing house into a two-unit condo building with construction of a new two-family building behind it. All four units would be sold to families making betwene 50% and 80% of the area median income.

A current path near the Coniston Road entrance. 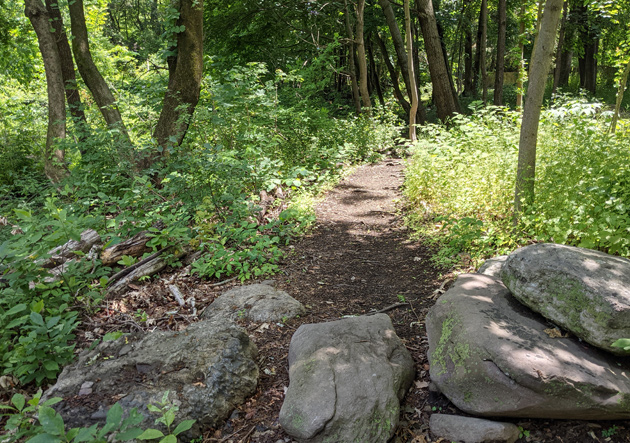 Map of proposed and renovated trails in the wetlands: 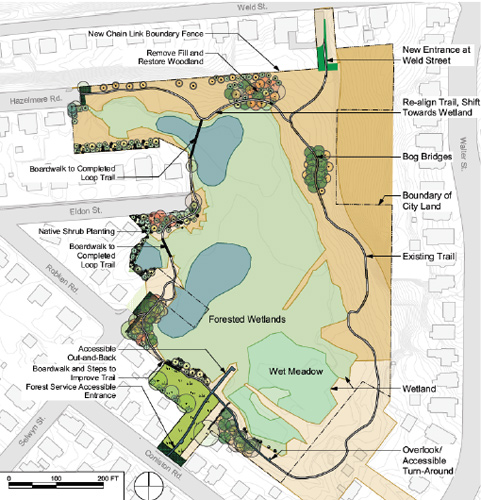 This area is naturally a wetland. BWSC piggybacked on the existing wetland when building its stormwater overflow infrastructure in the early 1990s. Some wet areas (by Hazelmere, for example) are well away from the BWSC pipe, which parallels Coniston Road and empties into the "wet meadow" area on the map. Due to the area's bowl shape, water naturally flows in and is absorbed into the soil, where it trickles its way into the Charles River by the VFW Parkway.

There is also a GoFundMe to add one more parcel to the wetlands, behind a home on Walter Street:
https://gofund.me/16cb01d7