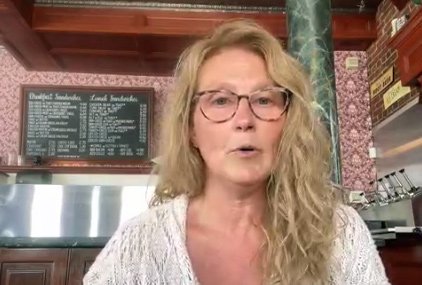 Baker testifies via Zoom from the Sugar Bowl.

The Boston Licensing Department rummages around tomorrow to see if it has any liquor licenses it can grant to Sugar Bowl Cafe, 857 Dorchester Ave., which says that if it gets one, it will re-open at night and give locals a place to go to relax rather than having to jump in a cab to get to South Boston or Lower Mills.

Owner Kathleen Baker told the board today she's trying to keep up with the times. The families who used to bring their kids in for ice cream when she first opened nearly 18 years ago have been replaced by the childless who can now afford the "ridiculous amounts of money" it now takes to live in the Polish Triangle area.

She said that she would pair alcoholic beverages with some of the sandwiches and high-end deserts she already has on offer.

Baker added that, initially, she would use the current 18 or so seats she already has. But she added she is hoping to expand into a large, currently unused space in the back of the coffeehouse.

She noted her family owns the building and that her four kids all live in the area. "We're not going anywhere here," and she vowed to continue to run "a respectable place, a place our community has been coming to for many, many years.

The mayor's office and the office of City Councilor Annissa Essaibi George (at large) backed the proposal. Nobody spoke against.

Wife to Joe Baker, who is

Wife to Joe Baker, who is Frank Bakers brother. I wouldn't be surprised if they suddenly find one, though if they want to keep up with the time accepting credit cards might be a start

Why does that matter who they are jealous of much? I'm not even from Dot. Go in quite a bit and they run a great business. Why don't people be more supportive of small mom-and-pop businesses? They give back to local sports and programs. Did The Dot? I doubt it! Good Luck Bakers

give locals a place to go to relax rather than having to jump in a cab to get to South Boston or Lower Mills.

for over a year now.

Not everyone wants to drink

Not everyone wants to drink their beer.

They'll have a nice convenient source of local beer to sell on tap.

They also lease their line to other local breweries for canning/co-packing so there may be other local beers available from just down the block!

"Have been replaced by the childless"

I'll take Where did all those gay guys from the South End move too for $100 Alex.

There's not really anything in the triangle left open since Dot Tavern closed down almost 2 years ago. This could be a welcome addition (even just a beer and cordials license would be better than nothing for the neighborhood). The banshee is nearby and decently friendly but if you're not a footy fan, it can be a real scene when there's a match on.

Something similar to Gulu-Gulu in Salem would be great.

A city without kids

Will never be reborn. The only ones moving into the city are the creative class who want the city to be an entertainment zone for the rich and childless. Good luck Joe and Kathy I have enjoyed your ice cream and coffee over the past several years.

Take the Red Line to Ashmont and the trolley to the Milton stop in Lower Mills.