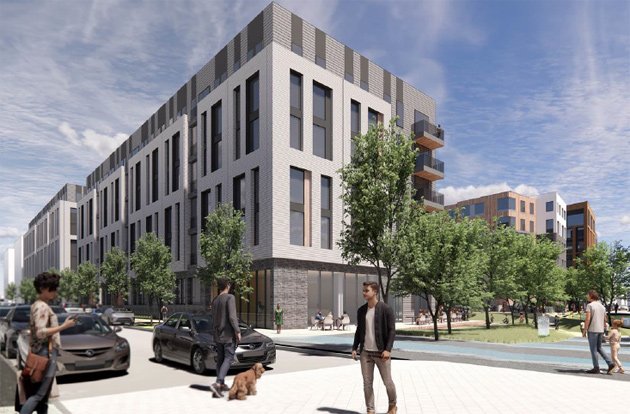 Rendering of building at Bremen and Gove streets by Embarc Studio.

A private developer and two non-profit groups have teamed up on a proposal for 426 residential units in six new buildings along Bremen and Orleans Street, between Maverick and Porter streets.

The proposal, by the Davis Companies of downtown and the East Boston Community Development Corp. and the East Boston Neighborhood Health Center, would include 70 "deeply affordable" apartments for people making between 30% and 60% of the Boston area median income. In total, 16.5% of the project's units will be "affordable," compared to the 13% minimum required by the city.

Three of the lots are owned by the health center, which has used them for employee parking, but which will use the money from their sale to "make much needed improvements to its healthcare facilities and expand its programming."

The project also includes a total of roughly 4,300 square feet of ground-floor commercial space and 172 parking spaces. In total, the parcels have 3.2 acres of land.

In addition to the buildings, the developers say they will make numerous improvements to public spaces, including roughly 0.9 acres of open land, new sidewalks and trees. Also:

An important element of the Project will be the redesign and reconstruction of the Gove Street plaza that creates an entrance to the Greenway at Bremen Street, between the proposed 75-115 Bremen Street and 135B Bremen Street buildings. Improvements will include widened neighborhood access paths, an enhanced open space, and additional site furnishings, plantings and place-making elements, subject to community input and approval by applicable City agencies and commissions. ...

Because the lots are already in a "special flood hazard area" based on present conditions, never mind rising sea levels, all the buildings will have residential units and key components above anticipated possible flood levels. Sewer and storm-drain connections will have backwater floods that will keep flood waters from entering the buildings via those pipes.

Proposed view from the Greenway: 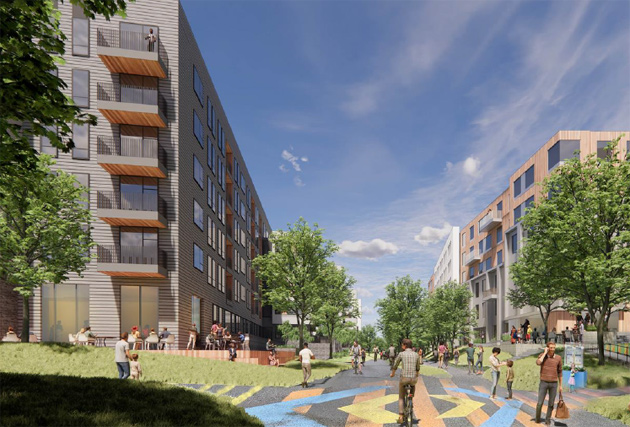 Is there a need for housing

Is there a need for housing like this in metro Boston? Where are these renters from and what do they do for a living? I feel so left out.

I'm sorry, are you really asking if people in Boston rent???

Have you rented or looked for a new place to live recently?

The rising prices and lack of available units should make it clear that there's a high need for ALL kinds of housing in the metro area.

Employees from EBNHC who now park in the EBNHC lots will now have to compete with neighborhood residents for on-street parking that does not exist. Not a neighborhood friendly proposal.

Well, wouldn't the neighborhood residents who park on the street (and their cars) theoretically be gone during the day while at work, therefore leaving plenty of open spaces for EBNHC employees? Better yet, the health center should be doing everything it can to encourage/incentivize alternative transportation methods. The site of this proposed development is in a dense neighborhood, along a multi-use path, and within easy walking distance to either Maverick or Airport stations. The current use as surface parking is hardly a good or efficient use of valuable land. We are in a city/region that is in desperate need of more housing and we need to get out of the mindset by which we oppose these projects because neighborhood residents think they are entitled to exclusive use of a public way to store their personal property. Build this project, and build more exactly like it!

Neighbors who own cars have resident parking permits. Unless the employees also live in Eastie, they don't have them so they won't be competing for the same parking spots. I also wouldn't be surprised if some of the parking spots included in the proposal go to EBNHC. I for one would way rather have a residential building with some retail than a parking lot nearby.

The design reminds me of

The design reminds me of Northeastern University near the Quad.

The neighborhood has so many questions regarding the development. Why is all the affordable housing now going into one of the buildings? Why did they present this to the very small Greenway group and not the neighborhood associations or the abutters?
EBNHC has a stellar reputation as a health center. It has become the center for lying to the neighborhood that it has supported for 50 years over greed.

Replacing vacant lots with needed housing (and a little retail), along a path that leads to multiple Blue Line stations. What is the problem with this?

NIMBY's gonna NIMBY is an easy retort to throw out there, but is a lazy one, that does not take into account the particular project or circumstances.

In this case, the circumstances are as follows: activists fought for years to turn a disused freight railway into a greenway, they made it happen, and now the greenway connects the harbor at Piers Park to Constitution Beach in Orient Heights. Plans are in the works for the extension of the greenway to Winthrop, Suffolk Downs (development) and Revere Beach. New ferry service from Maverick Square to downtown/seaport, slated to pilot in a few months, may provide the final link into the city proper.

The greenway is beautiful in part because of the light, sun and air it provides to residents who may otherwise live in cramped housing with little to no green space; this is common in East Boston. Development of 6+ story buildings directly adjacent to the greenway will reduce the quality of the greenway for ALL users for the benefit of SOME developers.

It is a shame that the EBNHC is behind this, because while most residents strongly support the health center, this alleged need for more funds is being used as a cudgel to quiet community opposition.

Sure some people will NIMBY for NIMBY's sake... but here you have concerned residents working to support something that is very precious in the East Boston neighborhood, beautiful open space. To me, that is a laudable goal, and worthy of support.

(South of 1A). The Greenway

(South of 1A). The Greenway runs in a trench for a former rail line and even has 10+ft high retaining walls along it in sections. There are various buildings along it already. It gets shadows cast on it constantly as it is by being depressed below grade.

I am rather skeptical that anyone on the Greenway feels that it's particularly *sunny*.

I am particularly skeptical that anyone considers a fenced in, barbed wire tipped parking lot to be somehow more pleasant/scenic to have lining their walk than a building, or to somehow be "open space" to be preserved.

And yes, I have been on the Greenway before.

Shade is a good thing

On a day that is 95F with a heat index around 105F, I think people should remember that shadow has significant upsides. And in terms of open space, open space is the space you can actually walk around in, a fenced off parking lot doesn't add to the open space. And as the article notes, they're going to actively add a bit more space around it. The idea that some apartment buildings around a park make the park obviously worse "for ALL users" just seems like it's motivated by an aversion to new things in your backyard.

the benefit of SOME developers.

while most residents strongly support the health center

Snark aside, I feel like you've glossed over the benefit of housing that people will be able to live in. At no point did you mention those potential residents.

It’s apparent that folks are not aware of shadows being proposed on the Greenway with this massive housing proposal. The parking lots were designated as just that in a previous decree. They should remain as such and fixed so as not to impact the greenway with their flooding.