Sprague Pond in Readville is OK, but could it be great? 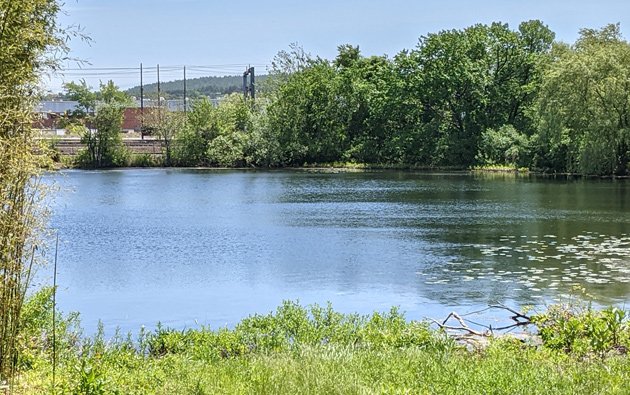 Sprague Pond, with the Northeast Corridor tracks and the Great Blue Hill behind it.

The Hyde Park Historical Society has asked the state to formally designate Sprague Pond, just off Sprague Street and next to the Northeast Corridor train tracks at the Dedham line, as an official "great pond."

The designation, only available for ponds of at least 10 acres in size (including ponds that used to be 10 acres but which have since shrunk), would allow public access to the pond for, at a minimum, fishing, bird hunting and boating, under the Colonial Ordinance of 1641-1647, which Massachusetts courts continue to uphold to this day.

The state Department of Environmental Protection holds a hearing on the request at 4 p.m. on Thursday.

If the state formally designates the pond as "great," it would be just the second in Boston - after Jamaica Pond - but the only one that might have a locomotive at the bottom.

Legend has it that an engineer figured the easiest way to get rid of a decaying locomotive would be to start it up, then jump off and let it run off the tracks into the pond. However, historian Harry B. Chase, Jr. reports that while there may still be the remains of a coal-fired locomotive in the pond, it got there by accident, when the Providence and Boston Railroad was building the line way back in 1834:

The engine Black Hawk, which had labored unsung in lowly construction service for barely a year, toppled ignominiously off the track along with its train of loaded cars, or else the roadbed sank under it, and was lost forever in the treacherous quicksands of Sprague's Pond.

I live around the corner from

I live around the corner from there on HP Ave and I did not even know it existed.

I don't know about the train

I don't know about the train but I do know from fishing from my boat there are at least 2 cars dumped in there...I could see them on sunny days...I hope they pull them out if not already...could probably solve a cold case crime

This pond and the soil are

This pond and the soil are heavily contaminated from pollution of yesteryear and this thing needs to be professionally decontaminated before anyone thinks of using it as a recreational area.

as a kid way-back-when growing up in the Manor, but I would never swim in it as-is, even back then.

Does it meet the state qualifications?

Google Maps measurey tool dealy puts it at about 8.5 acres.

Maybe it was once larger and the railroad filled it in?

Yep, used to be larger

When the tracks were first built, they transected the pond. They filled in the pond on what is now the side with the mega-warehouse complex originally built for Stop & Shop.

This one has the stench of

This one has the stench of NIMBY on it

I not sure if this would

I not sure if this would cause NIMBY protests but looking at the site on Goggle Maps imagery of this pond it is literally in peoples back yards. I wonder how Sprague Pond Lakeside Park came about?

In eastern MA, most ponds are literally in someone's back yard, unless they're surrounded by public land. And yes, those somebodies are often vocally opposed to anything that affects their back yard.

Jamaica pond isn't. Neither is Houghtons Pond.
They're great p0nds.

Are they not surrounded by public land?

Also, their being Great Ponds says nothing about whether any or all of the shore is privately owned. Here's a list (PDF) of Great Ponds. I invite you to look up some large pond that has houses on its shore. If you don't know any, know that for example. Lake Cochichewick in North Andover is on the list, and has a lot of houses on its shore.

The last time I was down at the pond, like 10 years ago, much of that looked like a park, mowed lawn down to the water, just with a fence along the road. Now it's completely overgrown.

The Boston assessors records says the land is actually two parcels, both privately owned, by the same family, with the larger parcel marked on the records as "unusable."

So maybe once, a long time ago, it was proposed as a park, but it actually isn't one now (or maybe it was once used by pond neighbors). This happens every so often with online mapping. See Newstead Montegrade.