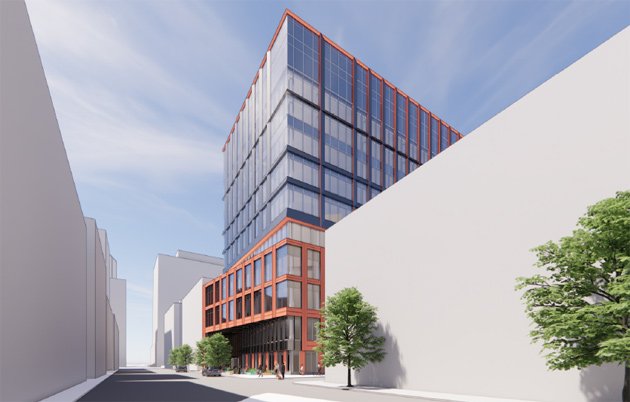 A California-based real-estate trust that focuses on life-sciences projects has filed plans to replace a vacant three-story building at 109 Brookline Ave. at Overland Street with a ten-story, 247,000-square foot building aimed at the burgeoning life-sciences business, with lots of lab space and room for offices for overseeing all that lab work.

The building would also have ground-floor retail space as well as four levels of underground parking with room for 230 cars, under plans by IQHQ of Solana Beach, CA, filed today with the BPDA. IQHQ bought the two-acre property for $270 million last April, according to Suffolk County Registry of Deeds records.

Recognizing the unique opportunity to further enhance the Fenway-Kenmore neighborhood, and to address the continued demand for high-quality office/lab/R&D space, the Project will be designed to attract cutting-edge labs and research, modern offices, and innovative startups. As such, the Project will strengthen this already dynamic area as the life sciences gateway to Boston along with the neighboring anchors of the Longwood Medical Area and Boston University, all together creating a powerful economic engine for the City of Boston and the Commonwealth of Massachusetts.

Because of the site's size, IQHQ will file for a "planned development area," which will essentially let it and the BPDA throw out most of the lot's current zoning and negotiate something that fits what the company wants to build.

IQHQ estimates it will pay $3.85 million in linkage fees for city housing and job-training funds and will create roughly 1,000 permanent jobs.

The company hopes to begin construction early next year, with the building shell completed by the end of 2024. It will then take another year to outfit the interior space to the specific requirements of tenants.

Thought you were going

Didn't you just announce that you were leaving uhub?

Simmons and Emmanuel need to cash out

1) Sell the land to life sciences developers
2) Buy Regis??? and relocate to that campus
3) Profit

They don't sell out. Why should these two schools do the same?

Besides, leasing land is what saved Emmanuel.

Who said Regis is for sale?

Wheelock got consumed by BU, what, two years back?

You got called out and tried to backtrack cupcake.

Buddy, you're dumber than Doug Bennett, sorry sarcasm is beyond your ken.

Here's how to order a blanket from Amazon so you can keep trying to cover for your idiotic statement with worse vitriol. I'll even pay for it. Let me know.

When someone has to "explain" that "its a joke"?

You know it wasn't.

The building across the

The building across the street (108-114) looks like a much better candidate for demolition/replacement.

Get thee behind me, truck
Is Boston world class or the City that Always Sleeps? Taqueria owner says he wants to prove we're the former, not the latter
Man shot in the arm on Hemenway Street in the Fenway
Fenway can opener peels back another truck
From the Boston Department of Bad Timing: Mayor celebrates International Building Safety Month, then has to rush over to South Boston
Pair trusted a man who said he could get funds to China quickly, but all he did quickly was run away with their money, police say