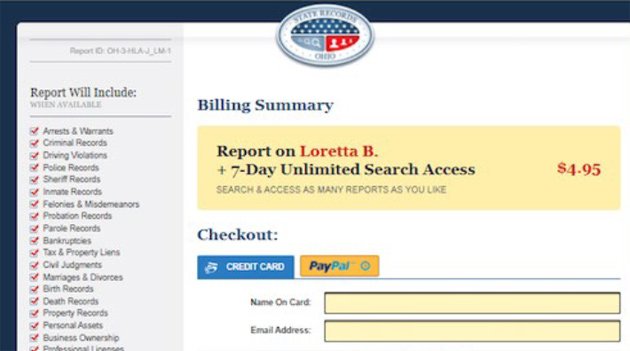 Part of the site's subscription form, from the complaint.

Three Midwesterners whose names show up when you search for them on a commercial public-records Web site have sued, alleging that the way the site makes you buy a subscription to see their information violates their states' laws against the use of somebody's identity or "persona" in commercial ventures without their permission.

Loretta Bensen of Ohio, Sherry Gaul of Illinois and Shontonna Harris of Indiana are seeking to become lead plaintiffs in a class-action suit they filed yesterday in US District Court in Boston against Infopay, headquartered on Atlantic Avenue in the North End for its staterecords.org Web site. The three also named Intermedia Ventures, a Newton-based Web consulting firm.

Infopay's Web site, which claims to have a database of more than five billion public records on Americans, lets visitors type in a person's name and state, after which it creates a supposed report on the public records it claims it has on the person. But to actually access the report, a visitor has to sign up for a paid subscription - which then lets them access other people's records as well.

In other words, Defendants do not offer to sell information about the individuals searched on their website, but rather, use their identities to sell subscriptions to their paid service. ...

By using Plaintiffs’ identities in their advertisements without consent and for their own commercial gain, Defendants violated - and continue to violate - right of publicity laws in Ohio, Illinois, and Indiana.

Their proposed class would be all consumers in the three states, whom they say have been wronged to the tune of more than $5 million - "$2,500 and $10,000 per violation."

They are represented by Birnbaum and Godkin, located less than a mile down Atlantic Avenue from Infopay's offices, with assistance from lawyers in New York and Chicago.

There are hundreds of "people search" websites out there, doing the same thing as this one. Trying to say that Infopay is using people's identities illegally is just silly. I'd love to be the judge to throw this stupidity out of court, but it probably won't happen.

I love it. I hope they tear

I love it. I hope they tear their asses up.

This is where you are incorrect.

To solve this problem, you have to establish through the courts that it is illegal. Then, once you have precedent, you can shut the rest of them down.

There's always a 'first step', and this is a good attempt. I hope it works.

What if it's free?

My favorite site doesn't charge, although they do have "sponsored" links that send you to pay sites.

Are you sure it's you?

i just wonder how they understood it's them, there are i guess thousand Loretta B.-s in the United States. it's not the full name even

Out of curiosity, I tried the site and typed in my full name and state. Got the same basic page as above, except the header came up as "Adam G" even though I'd entered my full name. Also, it listed every city I've lived in since I graduated college (except I think it said "New York, NY," when it should have said "Brooklyn, NY," tsk).

OK, so I got a little curious about the "New York, NY" thing and found another site like the above that lists a connection between me and "New York NY 10213," which is interesting, because that's Tribeca, which is not a part of Manhattan I think I ever visited even when I was still a Newyawka (closest actual connection I have is my father's office was across the street from City Hall, but it's not like I ever used that as an address for anything). So interesting, but not interesting enough to warrant actually paying money to find out what the connection supposedly is.

The links can be really crazy

Story 1:
My ex-wife lived for a few months in a particular Boston neighborhood while I was still paying the cell phone bill. 20+ years later, that address still comes up as being connected to me.

Story 2:
A friend's wife left in the middle of the night and NEVER SPOKE TO HIM AGAIN. (Only their lawyers talked as they got divorced.) He always wondered what happened to her. It was only years later, when a people search site listed a woman with his ex's first name as being connected to him, that he found out she had left him for another woman.

I periodically get junk mail addressed to me at my brother's address in Ohio, and his address comes up as my current address on those sites.

I have owned a home in Boston since 2005, have a business here, have a shitload of public records in my name here.

I last lived with my brother in Seattle more than 30 years ago when we were very much minors. We have both moved to several different states since then. We do not have any accounts or anything else in common whatsoever. The only public record I can think of that would connect us at the same address would have been both having joint savings accounts with our dad and our dad claiming us on the same tax return, both when we were well underage.

North End restaurant owner who hates paying to put his tables on the public sidewalk also hates Biden voters, hopes they crack their skulls
Outdoor-patio lawsuit: The musical
Four North End restaurant owners make federal case out of outdoor dining fee, but say $1.5 million each would make them whole
North End mythtake: Skinny house on Hull Street wasn't built out of spite
Gigi Coletta, Lydia Edwards's chief of staff, will replace her on the city council
Two North End restaurant owners and a Boston cop try to get in on multi-million-dollar lawsuit against city over rescinded vaccination requirements