Walsh heads to Washington in the morning; Janey makes history 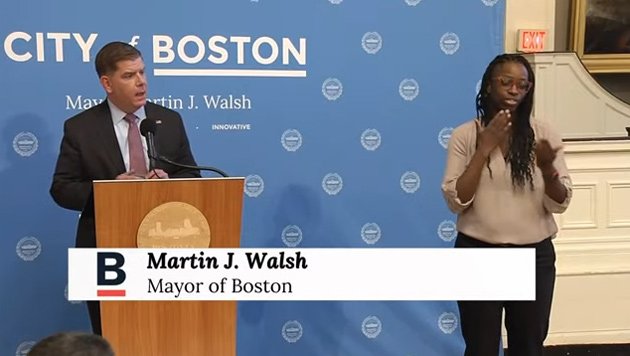 Walsh at his final press conference as mayor.

At 5:52 p.m., Sean Philip Cotter reported Walsh got the 51st vote he needed in the Senate to become the next Secretary of Labor. Among those voting for him: Mitt Romney, who was governor here when Walsh was a state rep.

Walsh will file his resignation letter at 9 tonight, which means that City Council President Kim Janey will make history at 9:01 p.m. as Boston's first Black and woman mayor. WBUR examines what that means.

Walsh said he will not get involved at all in the race to replace him permanently this fall. Janey has yet to say if she will run for a full four-year term this fall.

Walsh said he's most proud that Boston is first in the nation in creating affordable housing, in reducing crime, in improving BPS, in moving to reduce racial inequity. He also pointed to new libraries, fire houses, bike lanes and other infrastructure, even while keeping city finances at a triple-A bond rating.

"We still have work to do," he acknowledged. Covid-19 was, of course, awful, but it also brought out the best in the city. "When faced with a crisis of historic proportions, we stepped up," he said.

Since Walsh won’t be

Since Walsh won’t be endorsing anyone, I am very interested to hear who will earn Magoo’s endorsement.

voting for Biden as also successfully voting Marty out of office.

Technicality or not, democracy got it done!

Not a bad man, not a terrible mayor, probably not any more corrupt than his predecessors but what's the thing you can point to and say was Marty's big accomplishment in his tenure?

The city economy still booming, not really his doing. Major crime rates are down, again not thanks to him. Lots of new housing being built, but lots of people priced out of the city. I know his toady Linehan thinks they cured cancer but she's a Soviet level partisan flack. Anyone care to explain what he got done vs. watched happen? I think my best compliment for him is that he didn't do anything terrible, terrible wrong like bringing the Olympics here, etc...

Walsh made good on his

Walsh made good on his promise to replace the BRA with a Planning agency. He renamed it.

In Defense of Marty

He sunk substantial resources into most city parks in a way that Menino never really did during his tenure. Maybe overlooked but a significant achievement that will pay dividends for years. New playgrounds and playing fields galore.

He got more housing and especially affordable housing built than at any other time in recent Boston memory. Boston is a leader in affordable housing production because of him. It might not be perfect but we're much better in that area than other major US cities. The major deficiences here are not because of Boston but because surrounding suburbs NIMBY everything.

He was slow to come onboard with them, but once he did, he put in place the first bus-dedicated lanes and protected bike lanes in the city. More to do there but he laid a good foundation and fought back the parking-obsessed crowd on that one, especially in the last few years.

He brought city government into the internet age, compared to his predecessor who wouldn't even let people have voicemail. Most city services are online now, 311 works reasonably well for basic stuff. The website doesn't look like an old compuserv page any more.

Just a couple notable things. I think those all can be summed up by saying he took good advantage of the boom economic times here to make real investments with those added tax dollars. Maybe not the flashiest or splashiest things, but certainly made the city a better place to live.

What a fucking record.

Now where can we unload Baker?

Maybe we need a new ambassador to New Zealand.

After his press conference ...

He walked across the street, back to his office at City Hall - as Keytar Bear played.

There oughta be a law

that says that whenever a Mayor of Boston steps down, the office automatically passes to Keytar Bear for the remainder of the day.

Kinda like when Creed was the boss for one episode of The Office.

There. Now that's in your head all day.

Does city council now elect a

Does city council now elect a new President? Will there be a special election for her seat?

This is confusing... The city

Is that incorrect? Or did that home rule petition from a month ago change thow that works?

And all Bostonians lived

And all Bostonians lived happily ever after.