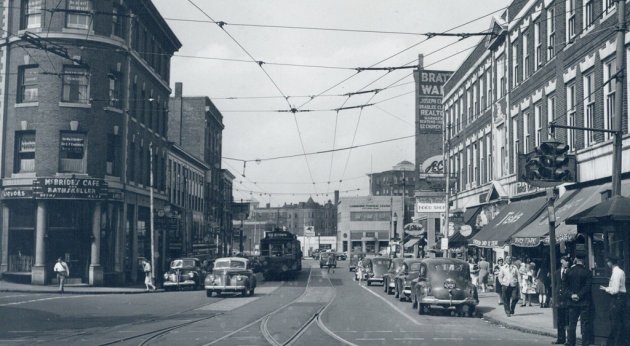 This is Cambridge, Harvard Square

No one is there

The building is gutted and being entirely renovated/rebuilt. Not sure if they are returning when the work is done. (Guessing not.)

Interesting. I didn't think the Archives posted anything from outside the City of Boston, yet here we are. That's clearly Harvard Square.

Since the Mattapan to Ashmont line was done under some sort of city auspices. They have a good amount of photos of the Milton side of Lower Mills in their collection.

I can spend hours reading

I can spend hours reading those old Cambridge newspaper scans. Especially the ads and the notices of where everyone is spending the summer.

the law offices of

19...40s? Not sure when they discontinued the streetcar along Brattle

The trackless didn't start running until 1936, and there are the wires for it. The last surface cars in Harvard (on what is now the 1 bus, but then it ran only to Massachusetts Station, which became Auditorium, which became Hynes/ICA, which became Hynes) ran in 1949. (The line was split there in 1930, and reconnected in 1962.) It's possible the T retained surface tracks in the square into the 50s for non-revenue moves, but I kind of doubt it.

Harvard Square, but in our fair city of Cambridge

Gas Station In The Back

I think that made it all the way to the mid-80's when One Brattle (HMV) was built.

I don't think so. I spent a

I don't think so. I spent a lot of time in Harvard Square in the early 80s and I don't remember that. I think it may have been replaced by the Harvard/Brattle subway stop (1979-1983, per Wikipedia).

I remember that being the location of outdoor Cool Cash ATMs in the 1970s. They belonged to Coolidge Bank & Trust, and were the first ones in the Boston area.

Recognized it in a heartbeat

It's pretty amazing how little that corner changed until recently. The names on the storefront changed, and the Coop building on the other side of Palmer got built at some point between when this picture was taken and the 70s, but other than that (and the cars, of course!)...

Here's a question for the real old-timers; what would JFK have been called when this picture was taken?

And the reason the name changed ...

Is because Councilor Al Vellucci, who hated Harvard with the fiery passion of 10,000 burning suns, got it in his mind that Harvard was fixing to change the name of the Kennedy School of Government and so convinced the city to rename Boylston Street in honor of JFK to make sure JFK would always be front and center at that pat of Harvard.

He also particularly hated the Harvard Lampoon, because they kept chopping down the tree he kept having the city plant in front of their building.

A good change regardless of why it happened

Given the presence of a much more prominent Boylston Street just a couple miles away in Boston, it's just as well that this one got a different, and unique, name..

Yes, good thing we got rid of

Yes, good thing we got rid of those two identically-named streets in Greater Boston. Now Bostonians never have to worry about that sort of potential for confusion.

easy for any Cambridge history nerd

How about Mass Ave - what was it's original name?

Around 1894 — soon after the Harvard Bridge opened — the cities of Boston and Cambridge, and the towns of Arlington and Lexington, agreed that a continuous series of streets in those communities should all be renamed Massachusetts Avenue, from Edward Everett Square in Dorchester to the Lexington/Lincoln town line. Before that, I think there were over a dozen different names for different sections of that road. And some of those streets had been renamed a few times prior to that.

So the original name of Mass. Ave. depends on which segment you're referring to. In Cambridge alone, it had 5 or 6 different names in the early 1890s.

"News of the unexpected demise of McBride's drew student comments ranging from sad thankfulness for obliteration of the tempting landmark to surprise and consternation that the ancient beverage emporium should withdraw from the galaxy of Harvard Square 'spots.'"

Back in the day, you could

Back in the day, you could pahk your cah in Hahvahd Square. And drive (or ride a trolley) east on Brattle Street.

cambridge savings in the back

ben affleck took me for coffee there once

The Cambridge Federal Savings Bank building in the background was built in 1937, and demolished in 1990. The Mobil gas station just behind it (to its left) was originally built in the 1920s, remodeled in 1941, and finally demolished about 1983. In this, photo, it looks to me like the 1941 remodeling.

[Source for the above: Cambridge Buildings and Architexta database, by Christopher Hall, ]

(The gas station site was used for parking until the 1 Brattle Square building was built in 1990. The Harvard Brattle subway station was on Eliot Street, around the corner, where the Harvard Kennedy School is today, its site not visible in this photo.)

The Coolidge Bank and Cool Cash ATMs were in another former gas station, diagonally across Mount Auburn Street from the Mobil station you see in this photo, on the site now occupied by Harvard University Employees Credit Union.

Also according to the Buildings and Architects database, the recently-demolished building that had Urban Outfitters was apparently remodeled about 1948 for the Corcoran's store. So I would wager that this photo is pre-1948.

The streetcar is coming from the Bennett Street carhouse, on the site of today's Charles Hotel. It could be operating to Massachusetts station in the Back Bay (now Hynes station), via Mass. Ave.; that streetcar route was discontinued 9/12/1949 to allow for reconstruction of the Harvard Bridge. Or, the car could be a non-revenue move to Lechmere station, via Cambridge Street. Although the Harvard-Lechmere streetcar route was converted to trackless trolley on 4/11/1936, the tracks on Cambridge Street remained active for non-revenue trips. Until 5/6/1940, cars of the Commonwealth Ave. (Boston College, then called Lake Street) line were stored and serviced at Bennett Street carhouse in Cambridge, and had to operate empty between Bennett Street and Lechmere.

[Source for the above: "Streetcar Lines of the Hub: The 1940s, Heyday of Electric Transit in Boston", by Bradley H. Clarke]

Yes, JFK would have been called Jack, but John F. Kennedy Street was known as Boylston Street until Al Vellucci got mad at Harvard and had the city council rename it in 1982.

As for the Curious George store, the business was sold just before construction began on their building; the new owner promised to reopen it somewhere in Central Square but she never gave a specific address.

And wasn't there another famous student hangout, in Kenmore Square, that likewise was called a "RAThskeller"??

We were a little tricky with this mystery photo and ventured outside of Boston's boundaries ! This photo shows Brattle St in Harvard Square in the late 1940s/early'50s. We're not exactly sure why this photo is in our Public Works collection, but we suspect that the Public Works was interested in the transit situation in Harvard Square - perhaps because of some planned work in Boston.

Based off of McBrides finding

Based off of McBrides finding it's demise in 47/48 , the license plates with letters on the bottom and I'm pretty sure I see a 1946 Chevy in the mix I'm going to say... Spring of 1946 would be my guess. Possibly late April if I had to guess based off of clothing choices.

1945 plates had Mass above the letters. 1946 had them below and they continued that way for a while. McBrides ceased to exist around 1948. Which is why I went with 46 but I guess it could have been 47 too.

Darn! One I could actually

Looks like Upham Corners except for the Cambridge Savings.