When your mom, who's OFD, flies down to spend her birthday with you 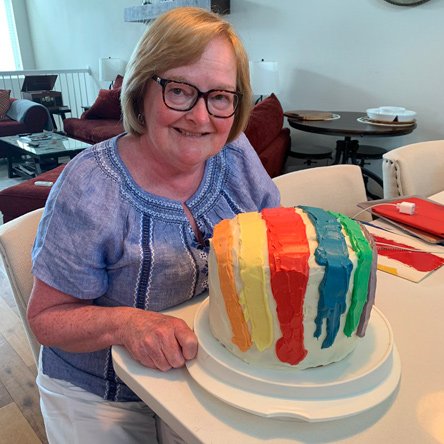 Mary McCann lives in Arlington, but is originally from Dorchester's Neponset section. When she flew down to Florida for her birthday this weekend, daughter Maureen wanted to make her feel right at home.

Just did a google search, but no luck. I’m assuming it’s not Oakland Fire Department or out for delivery, Could someone help a 60 yr old who’s never used a hashtag out? Thanks.
Love the cake btw.

Originally From Dorchester (not to be confused with DBC).

I love all of this and dream of having my very own gas tank cake!

You must be DBC, if so, welcome, and Happy Dorchester Day

Not to be confused with

Do you see Ho Chi Minh on there?

Came here to make that

Came here to make that comment....nice one!

First of all the cake is a

First of all the cake is a work of art. A friend painted a propane grill tank the same way for his dad's birthday, it came out awesome.

But am I the only one who thinks "OFD" is kind of indirectly racist? There's a reason those families left in droves in the seventies - black families were moving in. "White flight" (ie, racists leaving previously segregated neighborhoods) and redlining completely reshaped Dorchester in the 60s-70s. I'm sure there were lots of reasons people had for leaving, but not having black neighbors was a big one for a lot of people.

I understand pride in your roots, but I think it's important to understand the reasoning behind why your people might have left in the first place.

I moved out in late 1999, not 1974. I also know / knew the two people that came up with OFD, and they, trust me, are far far from being racist. One still lives in Dot and is one of the generous humans you will ever meet. The other gentleman had a really sweet house in Norwell on the river because he made gobs of money in advertising. He passed away a few years back.

I moved because it was getting to expensive to buy a house on my income at the time. What I wanted was getting expense (for the time) because people from other places, like people named Gabriel, were "discovering" Dorchester and already driving up prices.

I went to a mixed race high school, lived in a mixed race neighborhood, but after 30 years of planes overhead, fire trucks, police sirens, trolleys screeching, and cars blaring speakers at 3 in the morning, perhaps a little peace was in order. I finally wanted a life where no one was living above me or below me and also to get away from people from rich towns with names like Gabriel who were buying up Beaumont Street and Wellesley Park and terraforming the area into their own little Observatory Hill.

I can't wait to move back and tell you Gabriel about how much of an idiot you are.

While you are at it, I see you aren't casting racist aspersions of the Jews who fled Mattapan (with their kids and grandkids leaving Randolph now) or the Italians who moved to Saugus and Lynnfield. That was white flight too, but I guess only Dorchester (re: Irish) was racist.

I knew this would go well

Thank you for the kind words, John.

It's true, I have a funny name. It's from the Bible, John. There's a few Johns in there too. John means "graced by God," as you so clearly are.

Dorchester is a wonderful neighborhood. I lived there for a few years, you're right. I swooped in from the "rich town" of South Philly, where white flight emptied out half the city between 1950 and 1980. I drove the prices up while going to UMass Boston and working full time to scrape by in my apartment that I shared with 5 friends.

It's a great place. I miss being able to get to the beach so easily. It's the most diverse place I've lived since I left Philadelphia. I miss the family vibe. All kinds of families. I probably couldn't afford to live there anymore.

I'm not accusing anyone individually of being a racist, least of all you, or the lady in the original article. Racism is primarily not a disease of individuals. It's a disease of society, expressed through individual action. And it's important to think critically about why things are the way they are, for example why there are so many people who love Dorchester so much that they left 40 years ago. Sounds like you made a good choice, congratulations on your success.

All I'm saying is, "OFD" is a breezy way of glossing over some seriously fucked up history. And it doesn't help that most of the time you hear it, it's from somebody who grew up in Methuen or Haverhill or Nashua, who came into the city for a punk show, and wants to show you how much more Boston he is than you.

Actually most who are OFD

Actually most who are OFD live South. Braintree, Marshfield, Holbrook, etc. My parents left Mattapan but were originally from Brighton.

You did imply that those who left Dorchester but retain fond memories of the neighborhood are kind of racist. John Costello definitely offered the counterpoint for your statement.

Meanwhile, my mum spent the first 30 years of her life living in Dorchester, moving to leafy Roslindale only when she married someone from out this way. Her sister lived in the house she grew up in for another 45 years, leaving only when she could not live without assistance. That part of Dorchester gentrified without the intermediate step of "white flight."

Are there people who left Dorchester when the first black of Vietnamese family arrived on the block? Yes, but I would also say that you stepped into it by assuming that it was the case with most movers. Heck, for some it was an issue that they moved out of the parent's house and into the suburbs.

In short, careful with the assumptions.

The words he used...

You did imply that those who left Dorchester but retain fond memories of the neighborhood are kind of racist.

The words he used were "kind of indirectly racist". He went on to explain what he meant, and to state that it might be enlightening to look at the reasons why OFD people left.

That part of Dorchester gentrified without the intermediate step of "white flight."

That's interesting. That would imply, then, that "that part of Dorchester" didn't see demographics change from largely white to more nonwhite before gentrifying. Do you have data for this?

Yes, but I would also say that you stepped into it by assuming that it was the case with most movers.

In short, careful with the assumptions.

And be careful with your word choice when attributing statements to others.

"Do you have data for this?"

"He went on to explain what he meant, and to state that it might be enlightening to look at the reasons why OFD people left."

You have to love some guy from Philly and a pain in the arse from Northampton espousing on something that they have no idea about but actual people who lived and had relatives did.

You have no valid response, so you go "Do you have data for this"? Perfect debate tactic. It goes like this; I don't have a valid response, so I will it turn it back on you. You are like those religious nuts who "prove" that dinosaurs lived with humans because you can't prove they didn't because you weren't there. You must have been a lot of fun in college.

Do you have anything on the rise of Sikh communities in Dublin that you can pull out of the ether that you can drone about too? I'm sure you know about as much as that as you do on Dot in the 60's and 70's.

Do I have data for this?

I am talking a single street, with maybe 50 units of housing on it. Would you really like it if someone was keeping, and making available, data on such a small data set.

My "data" are my eyeballs.

What amazes me is that people seem to have some odd preordained views of how gentrification works. Gentrification happened in Charlestown, Somerville, and East Cambridge back in the 1980s and 1990s just the way it happened on the street my mother grew up on. Then it happened in the 2000s in South Boston, spreading south to the part of Boston where we are talking about.

You sure do love to make assumptions a lot. By the way, I hope you caught that the Swan Boats are running this year. Too bad there are no foreign tourists to ride on them.

After multiple paragraphs of spit-spraying venom, you lack the courage to say "fuck you".

Alexa? Please show me an

Alexa? Please show me an example of white fragility.

Your picture's going to be in the dictionary next to the definition.

OFD is anyone originally from

OFD is anyone originally from Dorchester, not just the white flighters.

"But am I the only one who

"But am I the only one who thinks "OFD" is kind of indirectly racist? "

My answer is yes, it is only you Gabriel.

I live in Dorchester and have all my life

Sometimes OFD is used by

Sometimes OFD is used by those who "never" left, to make the point that they're "real" Dorchester, working-class roots, etc... and not "those trendy gentrifying carpetbaggers come in to ruin our neighborhoods"

Sweet in so many ways.

Lovely. Love wins out in the beauty of a cake.

I picture a person, OFD and DBC, deals with OCD, is protected by ADA, for transportation uses the MBTA, used to work for DOT, who often hangs out in the areas of Mass Ave, and Comm Ave., visits The General for hospital care, knows the difference between the Gahden and the Public Garden, is a solid fan of The Sox, has season tickets to Fenway, likes to spend time at the MFA, and among their many accomplishments can list an A.B, MA, and Phd.

They like to visit JP, know that Southie is north of Dot, likes the restaurants in Eastie, knows not to call The West End, Westie, that Back Bay is not BB, understand The Common is singular, knows that if a person says The T that they don't mean tea, much less The Atheneum's Hu Kwa.