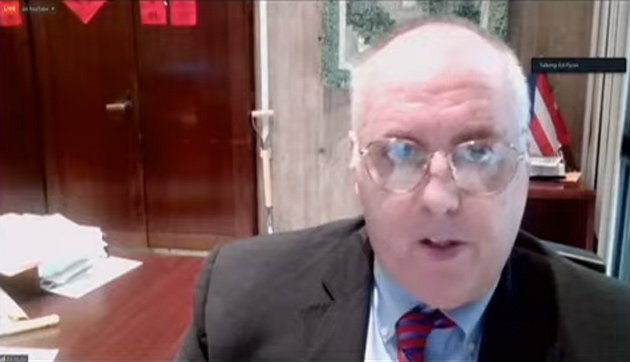 The Zoning Board of Appeal voted last week to let Sonder, a multinational hospitality chain, convert the 26 apartments it owns in a Batterymarch Street building into "executive suites" aimed mainly at traveling businessmen staying an average of four days.

The City Council today agreed to study ways to keep that from being replicated across the city - with some councilors venting their ire at the zoning board for what they said was a violation of the spirit of Boston's short-term rental ordinance, meant to protect Boston's rental stock by keeping it out of the hands of large operators eager to displace tenants and increase their margins through more lucrative hotel-like accommodations.

Councilor Lydia Edwards (North End, Charlestown, East Boston) questioned why the city Office of Neighborhood Services, under acting Mayor Kim Janey, supported the proposal by Sonder to convert the units at 30-36 Batterymarch St. to executive suites, while then City Councilor Kim Janey worked with her colleagues in 2018 to enact a new law to limit short-term rental units to small buildings with an owner occupant.

Edwards praised Councilor Michelle Wu (at large), who first proposed that ordinance - to the point of getting smeared in an e-mail campaign by Airbnb.

At last week's zoning hearing, Sonder attorney Jeff Drago said that, technically, the units at the Batterymarch building were not short-term rentals, which would fall under the ordinance, but executive suites, which are regulated by another ordinance. He said that even before the new ordinance went info effect, Sonder had been renting the units for short stays, rather than to more permanent residents. He said the building has been vacant of all residents since the measure went into effect as the company - and city lawyers - tried to figure things out. Unlike Airbnb and similar companies, through which one can rent a single room in a house, the Sonder units all come with a kitchen, in sizes that range from studios to two bedrooms.

But City Councilors Ed Flynn (Downtown, Chinatown, South End, South Boston) and Kenzie Bok (Beacon Hill, Back Bay, Fenway, Mission Hill), who had aides oppose Sonder's application last week, said the zoning-board vote creates a loophole, one Bok said was large enough "that "a truck can drive through," and lead to Sonder and other companies snapping up apartments across the city to re-purpose them as these sort of un-short-term-stay rentals that are, in fact, short-term-stay rentals. An aide to Councilor Annissa Essaibi-George also opposed the Sonder request last week.

This is not Sonder's only building downtown and not the first time it's tried to convert apartments to short-term executive suites. Last November, in fact, the ZBA rejected its plan to turn 21 apartments at 103-111 Arch St. into executive suites, after then Mayor Walsh's Office of Neighborhood Services joined Flynn, Essaibi-George and downtown residents in opposing that proposal. Sonder also owns 24 apartments at 17-33 Winter St.

Flynn, who said he is worried about tenant displacement and the potential for late-night party, trash and parking issues with visitors booked into buildings owned by giant corporations, said the executive-suite provisions in city code were meant for existing buildings mainly serving local hospitals and institutions, not to let companies like Sonder set up "de facto unregulated hotels."

"Why are we going to let large multinational corporations write their own rules and push people around?" he said, adding he is also concerned about the impact on workers at local hotels, which are typically more heavily staffed. "We don't need to bend over and help large corporations make a large profit in this city."

"We need to send a strong message to corporations that we're not for sale," Edwards agreed.

Councilor Liz Breadon (Allston/Brighton), said she also wants to look at whether the city is properly enforcing even the ordinance that should be prohibiting the use of units in large buildings as Airbnbs and similar rentals.

She said she has been getting reports of "instances of short-term rentals in bulk, like large numbers, up to 50s in some of the new buildings" in her district, where large new residential buildings continue to sprout like mushrooms.

In its 6-1 vote - member Hansy Better Barraza voted no - the zoning board set several conditions on Sonder: That the building be staffed 24 hours a day and that prominent signs be posted given nearby residents a number to call in case of any problems - and that the company return to the board in a year for a hearing on any possible issues. The board also said its approval was only for Sonder - if the company should sell the building, the new owner would have to apply all over again to run the suites.

The city councilors are a day late and ...

These companies are very powerful. Not a reason not to fight this tooth and nail though.

Call it what it is

They are turning the building into a hotel.

Unfortunately, it's much worse than a hotel

A hotel collects specific taxes, fees, and is regulated. This does none of that.

Hotels are marginally safer as well.

They have security and must meet standards.

Zoning Board is such a maverick when it comes to neighborhoods.

Still don't understand how SONDER can have master leases for, in some cases, three entire floors of Fenway luxury residential buildings on Brookline Avenue. Those buildings were never intended to be part hotel.

You mean "safer" like what has happened recently at the Double Tree and Hilton?

Having security does not guarantee "safer." Where are the facts that support your claim?

Silly question but all these

Silly question but all these Councilors who seem so upset about this sent aids to protest the move but did not go themselves? I realize they are busy people but I wonder if the presence of actual City Councilors would sway a board more? Is there a rule against this? I have been to these types of hearings before and the aids for all the important people line up, step up to the microphone and declare if the boss is for or against an item.

Occasionally a councilor will show up for a zoning or licensing hearing (like Bok did the week before for a hearing on a proposed electronic billboard on Causeway Street), but more typically, they have an aide who deals with these issues regularly. No rule against it (the mayor always sends an aide).

In this case, the Sonder proposal was the last hearing in a series of hearings that lasted ike 4 1/2 hours (which is why I missed it, I gave up after about 3 1/2). I think if the mayor's office had also opposed it, the board would have rejected the proposal, like a similar proposal from the same company last fall. But, well, there's a new mayor in town.

there's a new mayor in town.

there's a new mayor in town.

It's almost like there's no mayor in town. Can an acting mayor appoint or remove zoning board members? Without hire/fire ability, ZBA can do whatever they want.

So Janey was in favor?

Did she comment on the proposal before becoming Mayor?

So we have one ordinance that

It does seem odd that someone

It does seem odd that someone with an extra room they just want to rent out sometimes (if I had an extra room I could see myself renting it out on high demand days and using it as a photo studio most of the year) would have a harder time than someone turning a whole building into a boutique hotel that doesn't have to pay hotel fees or taxes.

Isn’t that room scenario exempt from the short-term rental law?

Not sure how they get to

Not sure how they get to claim that these are "aimed at traveling businessmen"/women when these Sonder suites come up in any tourist's normal search of Hotels.com. I wish there was a way to filter them out, honestly. The reason I'm looking on hotels.com and not AirBNB is because I don't want an AirBNB.

Flynn, who said he is worried

Flynn, who said he is worried about tenant displacement and the potential for late-night party, trash and parking issues with visitors booked into buildings owned by giant corporations, said the executive-suite provisions in city code were meant for existing buildings mainly serving local hospitals and institutions, not to let companies like Sonder set up "de facto unregulated hotels."

Am I reading this correctly? It sounds like Flynn is saying that he's okay with short term rentals if the local businesses being served are "local hospitals and institutions" but not...what exactly?

Short term stay units that have kitchens are invaluable for out-of-town families who are here to get care for ill family members. They enable parents to be here for their hospitalized children, spouses for each other.

He's talking about stuff like the Hope Lodge and the Ronald McDonald house who were getting caught up in the AirBnB regs unintentionally. Instead they should have just had a procedure to get exempted from the regs for the length of the owner.