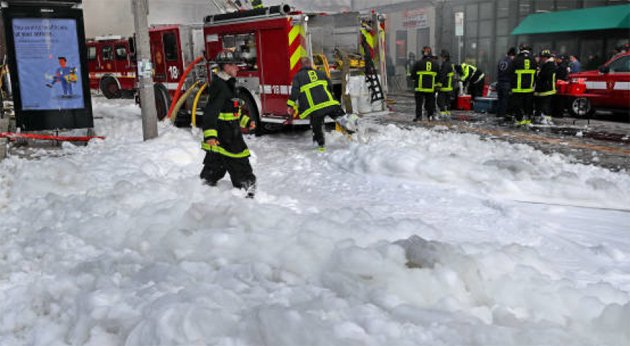 From the complaint: Boston firefighters knee deep in foam.

More than a dozen firefighters from Worcester to Boston today sued 3M, DuPont, Honeywell and other manufacturers of the "turnout gear" they wear at fires and a type of chemical foam they often use, alleging the companies have known for years the products contain a class of chemical that has been linked to cancer and other ailments and which winds up in firefighter's bodies in high concentrations.

In their complaint, filed today in US District Court in Boston, the firefighters focus on a class of fluorinated chemicals known as PFAS, which have long been used in firefighting gear because of its heat resistances, and in one type of foam.

The firefighters allege the companies knew about the chemicals' potentially harmful effects - and about safer alternatives - but did nothing to protect their profits.

For decades, Defendants were aware of the toxic nature of PFAS and the harmful impact these substances have on human health. Yet, Defendants manufactured, designed, marketed, sold, supplied, or distributed PFAS and PFAS chemical feedstock, as well PFAS-containing turnouts and Class B foam, to firefighting training facilities and fire departments nationally, including in Massachusetts and in the Worcester, Norwood, Brockton, Fall River and Boston fire departments. Defendants did so, moreover, without ever informing firefighters or the public that turnouts and Class B foams contained PFAS, and without warning firefighters or the public of the substantial and serious health injuries that can result from exposure to PFAS or PFAS-containing materials.

Among the firefighters who brought the suit: Daniel Ranahan, a seven-year Boston firefighter, currently stationed at a Roxbury fire station - like his father and brother before him.

Daniel’s proudest accomplishment has been establishing the Boston Local 718 Firefighter and Family Cancer Foundation to provide emotional and financial support to firefighters diagnosed with occupational cancer. He started it shortly after learning of his own diagnosis and of other active-duty firefighters who had been diagnosed with cancer. In the course of firefighting training and fire suppression activities, routinely wears turnouts and has used and/or been exposed to Class B foam. Daniel has been diagnosed with and treated for Hodgkin’s lymphoma cancer.

His wife is also a plaintiff.

The firefighters ask a judge to let them bypass the normal statute of limitations on product-liability cases because of what they say was a deliberate effort by manufacturers to hide the potentially harmful effects of the chemicals from the firefighters dressing in them daily. They say they did not realize they were even ingesting the stuff until this past December, when "when blood serum tests revealed that they had significantly elevated levels of PFAS in their blood."

They are represented by two law firms, one based in Plymouth, the other a specialist in product-liability cases - firefighter PFAS cases in particular - in California.

It's a reasonable request.

The statute of limitations seems designed to protect the manufacturers from any responsibility.
Best of luck and determination to these firefighters.

Best of luck to them

But society is real "support our heroes" until it comes time to actually, you know, MATERIALLY support them. Look at the 9/11 guys. Absolutely shameful.

On a less moralistic tone, I wonder if it's possible to create chemical additives to clothes that significantly suppress the likelihood of catching on fire but AREN'T made out of cancer causing man made pseudo molecules. It seems like every time humans create a new miracle product, 20-50 years later, cancertown. Look at asbestos, safe and clean and perfect for all over your home, until it wasn't.

If you look at the complaint

Down towards the bottom, they reference an alternative substance that supposedly fits the bill - made by 3M, one of the companies they're suing.

Safe until it wasn't

The allegation is that the manufacturers knew, or at least had good reason to suspect, for DECADES that the products were not actually safe, then both failed to disclose such as well as later denied/disputed any suggestions that the products could be hazardous.

Asbestos is not man-made, and was long known to be hazardous. The companies selling it were fully aware of that, and denied it for more than 60 years, while legions of their workers contracted a deadly lung condition. It's the model for corporate irresponsibility, subsequently followed by the tobacco, oil, and other companies, apparently including the defendants in this case.

Why won't ANYONE think of the shareholders?!

Who knows how just how many well-off retirees NEED those shares high to bolster their portfolios and pass on their undertaxed wealth to their spawn?

Sure, a few dozen Jakes get sick and die but old people NEED second homes and wealth funds and all sorts of things that the hoi polloi could not even imagine.

Thank Moloch for Statutes of Limitations in these cases. For the poors will never really know the struggles of the almost rich and nouveau riche.

You probably own them too

If you have a 401k, I’d venture to guess that you either own some 3M shares directly or indirectly through ETFs and blended funds.

It seems obvious that any

It seems obvious that any foam or chemical you use for fire-suppression (other than water) is going to be hazardous to your health. Even the smoke and fumes from baking soda can't be good for you.