Board approves new hotel along Greenway in the North End 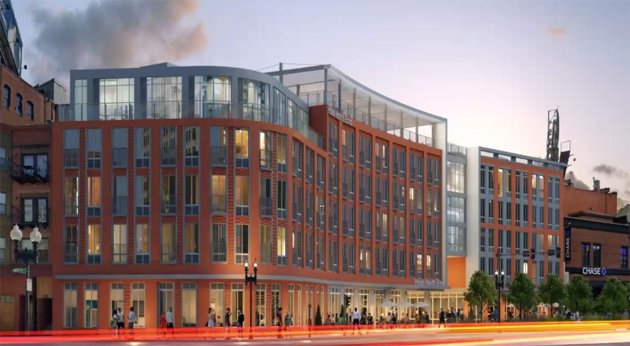 Rendering by The Architectural Team.

The Zoning Board of Appeal today approved a developer's plan to replace a two little used buildings and a parking lot on Cross Street at Endicott Street with a five-story, 134-room boutique hotel that would include a cut through to Morton Street and Cutillo Park but no parking at all.

The board voted 6-1 - board Chairwoman Christine Araujo cast the dissenting vote - for the plans by William Caulder's 6M Development of the North End.

The hotel will have two restaurants, one on the ground floor and one on the roof.

Despite the near collapse of the Boston hotel market during the pandemic, Caulder's attorney, Johanna Schneider, said there is strong demand for hotel space in the North End area, in particular along the Greenway, and that the new building would replace a blighted block with a vibrant new North End gateway open to both visitors and residents.

Schneider said the new rooms could even help the North End with its serious "Airbnb problem," although Araujo disagreed, saying that a boutique hotel's price point would be a lot higher than what the typical Airbnb customer would be willing to pay.

"I don't believe this project is terrible or would have a net negative impact on the community," she said, adding she said 6M had done work to keep the Greenway open to all residents, in part through improvements it proposes to pay for in Cutillo Park and in opening the roof deck to North End residents and organizations.

She acknowledged the North End has a housing issue, but said she didn't think replacing the hotel with a pricey condo building open to just "a small group of homeowners" with views of the Greenway would be any better, because for their millions they would gain exclusive rights to a key vista along the Greenway.

State Sen. Lydia Edwards, who preceded Coletta on the council, opposed the project, as did both of the neighborhood's resident associations.

The Boston Transportation Department's Robert D'Amico expressed concerns about the lack of parking. Araujo said she was particularly concerned about the 70-foot distance between a hotel drop-off area and its entrance, specifically how tough it would be on the elderly, people with handicaps and parents with children in strollers.

Schneider said the hotel is in the middle of a transit-rich area. And she said original plans for the proposal showed a drop-off area in front of the entrance, but that designers changed it at the insistence of the BPDA, in an attempt to turn the area in front of the hotel into more of a pedestrian-friendly area. The BPDA board approved the project earlier this year.

Residents who spoke against the proposal said it was just too large for the area and would cause traffic, parking and noise issues. Residents of 26 Stillman St. in particular said the new hotel, just 8 to 12 feet from their windows, would cause privacy issues that would force them to move out of their homes.

ZBA member Eric Robinson, himself an architect who has worked on large Boston projects, said he felt the building mostly worked as a "gateway" to the North End, but urged 6M to work with the BPDA design team and residents to make the non-Greenway side of the building better fit in with the neighborhood.

better to have visitors stay in a well regulated, well kept hotel, rather than the wild west of airbnbs.

also lol at parking concerns about a hotel in the north end. what tourists are booking a stay right in the center of the city and also renting a car??

I know without this hotel

I know without this hotel where will the tourists go?? The brand new Hilton across the street??

The day a UHaul ran into Caffe Nero

Before I read the headline, I thought this was a photo of another building fire.

I'm guessing that the buildings are "little used" today because the owner/developer raised the rents to where the businesses had to move out. Twenty-five to thirty years ago, this block was filled with food retailers. Among the last holdouts were Maria's Pastry and a large produce store. J. Pace, a relatively large Italian grocer, used to be there, too.

The parking lot likewise had vibrant businesses, including Purity Cheese, until the Big Dig took the property (or part of it) and tore down the structures to widen Cross Street.

... that was certainly a nice little strip of businesses.

The opposition to this is absolutely maddening

Christine Araujo can’t fathom anyone walking 70 feet. The neighborhood groups think a five story building is too big, and that removing a parking lot will cause traffic.

These are not serious arguments by thoughtful people, and I’m glad that (this time) they were treated as such.

70 ft is far for some groups

Araujo (who I usually disagree with) didn't say 70 feet would be far for everyone. She specified "how tough it would be on the elderly, people with handicaps and parents with children in strollers." For my elderly mother, 70 feet is a long distance. It's also long for someone on crutches.

those people shouldn't stay at that hotel then? I'm not sure why the elderly, people with handicaps and parents with children in strollers are suddenly incapable of evaluating the suitability of a hotel for their needs before booking a room there.

I don't think you can build and open a new hotel these days that isn't usable by elderly and disabled people.

does "70 feet of space between hotel and road" really qualify as "not usable"? If it's not within ADA compliance, that's another story but surely that would be mentioned as a reason not to approve the building if so?

" Residents of 26 Stillman St. in particular said the new hotel, just 8 to 12 feet from their windows, would cause privacy issues that would force them to move out of their homes."