Brookline man was hauling a small armory of guns and ammo on a trip back from New Hampshire, State Police say 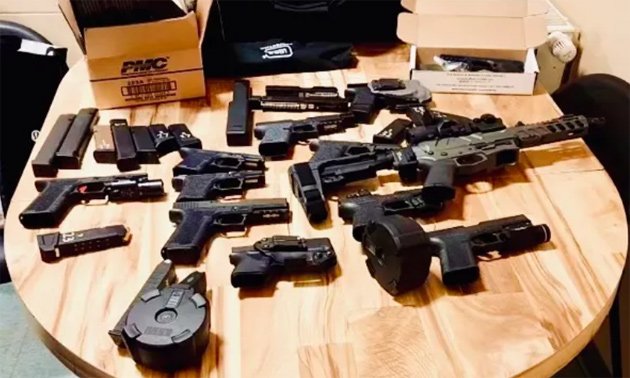 State Police report troopers responding to calls about an erratic driver on I-95 south Saturday night wound up arresting a Brookline man on a variety of gun and drug charges.

A trooper dispatched to find the erratic driver did not have much trouble finding Stewart Silvestri, 24, because, as callers had reported, he had pulled into a deserted truck weighing station in Rowley around 10:35 p.m., State Police say.

Trooper [Charles] Buckley spoke to the operator and lone occupant, STEWART SILVESTRI, 24, of Brookline. While interacting with SILVESTRI, the Trooper observed a handgun with a 50-round drum magazine in plain sight inside the vehicle. The Trooper then observed another handgun under the driver’s seat. At that time, Trooper Buckley removed SILVESTRI from the vehicle and secured him for reasons of officer safety while continuing his investigation. Other MSP personnel began responding to assist.

State Police say troopers found seven handguns and one AR-style short-barreled rifle" inside his Outlander, as well as 34 magazines, 23 of which were high capacity magazines. State Police add that 23 of the magazines were already loaded with ammo.

Also located in the vehicle were at least 22 various firearm components and hundreds of rounds of ammunition.

Silvestri does not have a Massachusetts firearms license, State Police say, adding they believe he bought all the guns and ammo and parts in New Hampshire.

While awaiting booking at the Newbury barracks on a raft of gun charges, State Police continue, Buckley determined that Silvestri seemed like he might have been driving while under the influence of something and administered several field sobriety tests that led to an OUI-Drugs charge.

Trooper Buckley determined that SILVESTRI had been operating a motor vehicle under the influence of drugs. Information gathered in the investigation suggests SILVESTRI may have obtained the firearms in New Hampshire.

Was there a QAnon sticker on his car?

I'm thinking that wouldn't be a bad wager.

Or a Thin Blue Line flag.

Or a Thin Blue Line flag.

Our Nation's Gun Laws are Completely Sane and Great...

This guy was just going to join a well-regulated militia in Brookline.

That's what all the alleged

That's what all the alleged drugs were allegedly for: getting everyone nice and regulated.

Could this actually be the same person?

Sure looks like the same guy, but what a sad and sudden (alleged) crash and burn this would be if it's him.

we still have no idea what he was actually doing before this.
Just because he knew how to put on a shirt and tie and say some things in his profile doesn't mean he wasn't also into this sort of thing.

Also, white kid in New Hampshire? This isn't all that surprising..

An affluent white male being into guns and drugs...this is a surprise? Only surprise is getting caught.

An affluent white male being into guns and drugs...this is a surprise? Only surprise is getting caught...before the bloodbath and public hemorrhaging of thoughts and prayers.

He is known to people I know in Brookline, but I don't know him personally. Very sad.

Well if he's known to people

Well if he's known to people in Brookline who you know, then...actually, where were you going with that?

Got caught off guard. I didn't want to reveal too much info on UHub. It's just sort of surreal to see this.

This is what drugs can do to you

We don't know, but it sure looks like he got hooked and started doing this crazy shit to keep the drugs coming. Just goes to show that it's not just "those kinds" that end up addicted.

That was my thought

And if it's not him?

peaceful gun owner peacefully transporting his peace weapons over state lines peacefully for what we can all be sure were the most law-abiding reasons. What a patriot.

Oh no, how are our gangs

Oh no, how are our gangs supposed to kill each other without a steady stream of guns from our idiot neighbors?

The mean streets of Brookline

Running guns for the TLF?

That looks like multiple killings and other human tragedy were likely prevented.

Obviously planning an armed response to the snow shoveling regulations.

Does NH law allow anyone to

Does NH law allow anyone to show up and buy all this stuff?

Whoever sold him the guns should be arrested as well.

Just restocking the evidence room of all the missing guns.

In other Brookline news

C Line not fine
C Line couldn't go far because of a stuck car
Flipping over the New Year in Brookline
Barbara Walters, Brookline native who became international reporter and interviewer, dies at 93
C Line tracks blocked by a stuck car so riders just aren't going far
Brookline shoplifter got the Maxx for the minimum after she whipped out a canister of pepper spray, police say