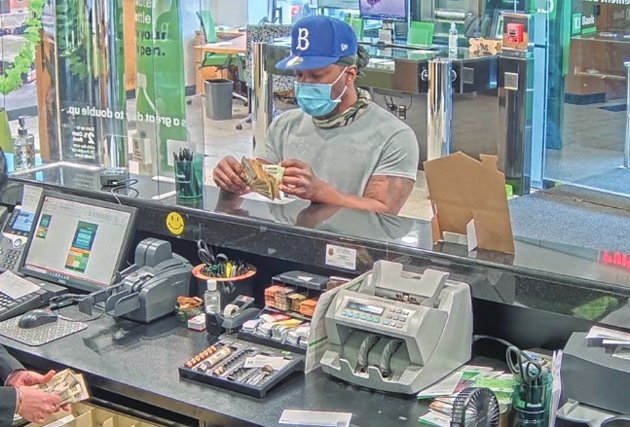 A Jamaica Plain man was indicted this week on charges he held up a TD Bank branch on May 2 while wearing a blue Brooklyn Dodgers cap - less than a week after another man, wearing a similar blue Red Sox cap held up the same bank and the same teller.

Jalonni Shabazz, a one-time Framingham resident formerly known as Jalonni Tucker, 40, now faces up to 20 years in federal prison on the new bank-robbery charge, the US Attorney's office in Boston reports.

Not long after he allegedly robbed the TD Bank branch at 1270 Massachusetts Ave., the feds say, police found a "royal blue" baseball cap matching the Brooklyn Dodgers cap the robber had worn - with DNA that matched Shabazz's. Unique tattoos and photos from both nearby surveillance cameras and his own Facebook page also helped tie him to the crime, the feds say.

Authorities already had Shabazz's DNA on record because he has a long criminal career, dating to when he was 18, a career that includes assault and battery with a dangerous weapon, check forgery, witness intimidation and bank robbery.

According to an affidavit by an FBI agent on the case, around 12:50 p.m. on May 2, Shabazz walked into the Harvard Square bank:

Photos and video from surveillance cameras around Harvard Square let investigators track Shabazz. The affidavit says that before he walked into the bank, he'd placed a backpack in a dumpster behind 22 Plympton St.; after the robbery, he returned, took off his Dodgers cap and do-rag - giving investigators a good look at his blond-dyed hair - grabbed the backpack and headed off.

The affidavit continues that in her initial interview, the teller at first may have confused some details of the robbery with those of another robbery just five days earlier, on April 27, when another man, also wearing a blue baseball cap but with a blue Sox B, went up to her and demanded money.

Jamal Copeland of Boston has been indicted for that robbery. Like Shabazz, Copeland has a long criminal record, and had only been back on the streets for a few months after his release from state prison for his role in a 2004 Dorchester kidnapping and robbery that ended with his crime pal shooting at a Boston cop.

Copeland during his robbery, allegedly:

In a sentencing recommendation for the 2017 conviction, federal prosecutors called Shabazz an incorrigible, violent man who had resisted efforts to get treatment for his drug addiction. On his Facebook page, Shabazz wrote about his struggle to stay sober and spoke of his relationship with God and his family as helping keep him centered.

On April 13, in one of his last posts, he posted some selfies standing in front of the Charles and wrote:

Today I did myself a favor and ran 7 1/2 miles along the Charles River after a 12 hour work day because I knew I could! YOU can do the Same I believe in you!

why aren't tellers armed with MACE?

Because it's not their job to get into violent confrontations.

They ring the silent alarm, add the dye packs and trackers, and sit back. Then the robbers get caught by the people whose job it is to do such things, ideally in a space away from innocent bystanders.

(Also, you really think they can use mace 1) in an enclosed space 2) with a large glass or plastic shield in between?)

Because they're bank tellers.

Because they're bank tellers... Maybe US Marshals in the secret service to take care of the investigation and apprehension of criminals the last thing anybody wants is a poor sweet innocent bank teller getting freaking shot in the face.
I just can't believe that these fools are still robbing banks when they keep getting caught for it clearly they're not good at it I don't know why they would continue to try unless they really just miss prison

How about a trap door?

How about a trap door?

Wise enough to remove the

Police responded to a burning bush in Cambridge, but the bush did not speak to them and there was a guy standing next to it with a lighter
Protests, few answers at meeting on police shooting of Bangladeshi immigrant in Cambridge
Mythical Central Square club set to re-open next week
Tech exec at area drug company and boyfriend charged with swindling company out of more than $2 million
Two shot in Cambridge
Protest over police killing of man in Cambridge