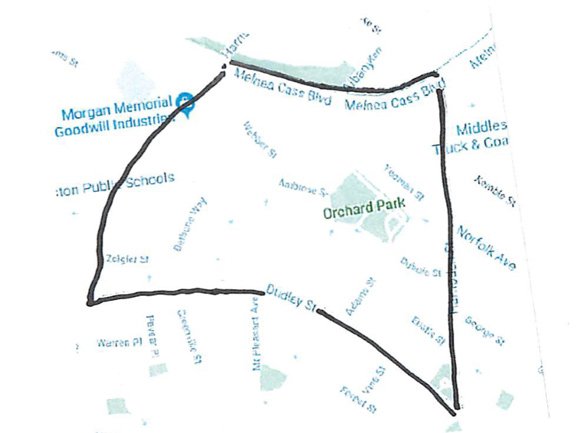 Court-ordered map of Gaines's exclusion zone once he's on probation.

A federal judge this week sentenced Raymond Gaines, 42, to 90 months in federal prison after he admitted he got caught selling crack to an undercover agent three times at South Shore Plaza following his release on an earlier crack-sales conviction.

According to an affidavit by a Boston Police officer working with an FBI regional gang task force, Gaines made three trips in his black BMW from his home in Bridgewater to the South Shore Plaza, where an undercover cop got in and bought crack from him in April and May, 2021.

In a sentencing memorandum, a federal prosecutor urged a sentence of 117 months. In addition to the drug selling and weapons, Gaines was also violating his probation on the earlier conviction by repeatedly showing up at Orchard Park, despite a judge's order to stay away from that area, prosecutors say.

Gaines's attorney filed a sentencing memorandum, but Saylor agreed to place it under seal because it contained information about his medical history. However, in a public response to the government's memorandum, she denied allegations that Gaines was a member of the Orchard Park Trailblazers gang, that just growin up in that development and being friends with gang members is not enough proof that he was himself a gang member.

Maybe it's just this site covering them but it seems like the Feds get the headline convictions and Massachusetts prosecutors get probation.

Federal prosecutors have strongly worded guidelines (ref 1) about what standards need to be met before they even think about commencing a prosecution. Federal prosecutors do not bring forward cases unless they have no doubts about their ability to secure a conviction, and in fact most of the cases they do prosecute (90% in 2018, ref 2) result in a guilty plea rather than a conviction by trial.

Basically, if you are facing federal prosecution, your guilt is exceptionally provable and you best start preparing yourself for your prison stay.

At the same time, state level courts see a much wider range of laws and number of cases compared to the federal courts. Without spending half the day looking at definitions and data sets to make sure I'm getting these comparisons completely correct, it looks like the federal courts in 2020 (3) saw 64,565 cases for the entire country, while Massachusetts criminal courts alone in 2020 saw 145,902 cases (4).

Surely there is a published data set, if not a detailed review similar to the federal one I found that shows statistics of outcomes of prosecutions and the sentences imposed but I'm just not coming up with it right now.

Why isn't he excluded from South Shore Plaza?

since that seems to be where he prefers to commit his crimes?

The first time, it was in the area of Orchard Park. Plus, that's where he grew up and is pals with all these people there - even if he is not a member of their gang.