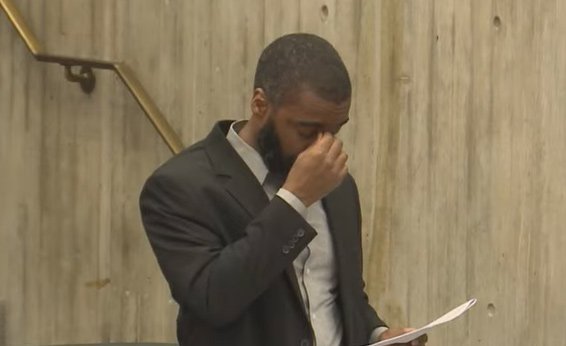 Worrell had trouble completing his request for a hearing

Councilor Brian Worrell (Dorchester, Mattapan) had trouble yesterday getting through a formal reading of his request for a hearing on how Boston needs to increase its efforts to curb gun violence.

Worrell recounted how, when he was 16, he learned his cousin had been shot to death and how, later, he lost his uncle to gunfire. And then, he said, pausing and wiping tears, his friend Max Hylton, a barber at Celebrity Cuts on Washington Street in Dorchester, died after being shot twice last week, "doing what he loves, cutting hair and building community."

"We are tired of feeling unsafe at our parks and just simply walking through our neighborhoods," Worrell said. "Throughout the years, I've lost many friends due to gun violence and the cycle continues."

Worrell's motion, co-sponsored with Councilor Tania Fernandes Anderson (Roxbury) calls on city public-health and public-safety officials to convene to address gun violence, in particular in the city's Black neighborhoods, by trying to stop kids from getting into violence to begin with. His hearing request points to the Safe and Successful Youth Initiative and, earlier, the Boston Miracle, as programs that can help stop the cycle of violence.

Fernandes Anderson said she's tired of people telling her the answer is for Blacks to pull themselves up by their bootstraps when the system makes it impossible for them to do so. She said it's time for Boston to put real money into the communities - she voiced outrage about the $300 million she said the city put into building a new Boston Arts Academy in the Fenway with nothing remotely comparable in Mattapan - for everything from parks to community centers. And, she continued, enough with affordable apartments - what the communities need are affordable houses, so that families can begin to build wealth in the same way that others in other neighborhoods have long done.

And, she continued, the city has to work towards reform of a justice system that treats Black and Brown people far more harshly than Whites accused of the same crimes.

"You are building the jungle and you get animals and then you ask: Why do you act so?" she said. "Build a forest so that I can fly like a bird."

Forests have (land) animals, and jungles have birds

So what is that about again?

Check out www.BostonSOS.com that is an organization to help hold BPS accountable for violence. Many of the kids acting violent learn the behavior in school and aren't taught accountability, good manors , being a contributing member of a community when they are younger and it gets worse with age sadly. And absolutely less money is invested in Roxbury, parts of Dorchester and mattapan than other parts of the city, but that's starting to change, slowly.

BPS responsible for violence? I don’t think so.

Many of the kids acting violent learn the behavior in school

When I read this I first thought maybe you meant they learn from other kids - which would beg the question of where those kids learned it, but nevermind, because you continued:

and aren't taught accountability, good manors , being a contributing member of a community when they are younger

Ok, my kid went through BPS from kindergarten on through high school and although I’ve had my share of disagreements with how the bps is run, I have to say that the kids in her schools most certainly were taught manners, accountability, community engagement, etc by their teachers, especially in the early years. And I was around to see it - I was one of those uber-volunteer parents for the k-6 portion.

The kids with behavior issues mostly brought them from home.

I don't disagree that the

I don't disagree that the city needs to invest more in neighborhoods, but the school argument I don't understand. No kids in this city go to the schools in their neighborhoods - they go wherever. So why does it matter where the physical building is?

A return to neighborhood schools would probably be beneficial at this point - it allows for parents, community groups, etc, to get more deeply involved and create school communities built of neighbors and families, a rich variety of caring adults to enrich kids' lives. Bussing was a noble attempt at desegregation, but ultimately it's failed - between private schools and the western suburbs and charters, wealthy white families don't attend the same schools anyway, but now black kids are being bussed for an hour each way and their overworked parents don't have the ability to drop into parents' night to meet their teachers.

Too cool for school
It's official: Boston to get wicked cold
How people in the South End or Back Bay view prospective dates in Allston/Brighton
Don't forget to pick up some rubbers
When kids just used to hang out in the street
Wu calls for end of BPDA, 10% cap on rent increases in larger buildings, BPS improvements