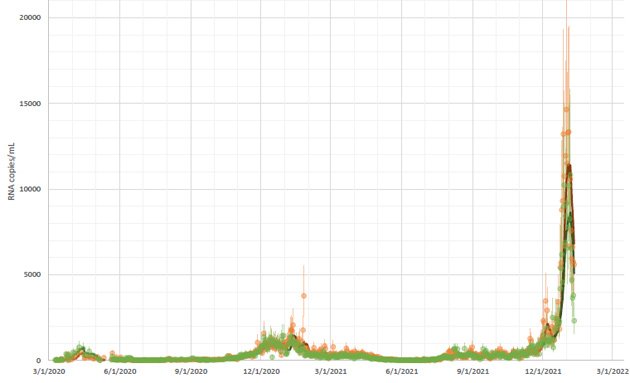 The latest Covid-19 sampling data from sewage at the MWRA's Deer Island treatment plant show a significant decrease, which might indicate that the current surge is cresting and could soon begin to ease in a week to ten days.

Experts at Northeastern had earlier predicted an easing in the near vertical increases in Covid-19 cases would begin in mid-January.

The testing at Deer Island by Biobot, an MIT spinoff, an has become a tool for predicting Covid-19 numbers over coming days in the Boston area served by the MWRA - people begin excreting viral particles before they realize they're sick or need to be tested.

The news would be welcome at area hospitals, which have seen a surge in admissions, as well as at local workplaces, which has similarly seen a corresponding increase in absences due to the omicron strain. However, the decline signaled by Deer Island would still mean Covid-19 rates significantly higher than last winter's surge.

Free tagging:
Coronavirus
Ad:
Like the job UHub is doing? Consider a contribution. Thanks!

Magoo just went number 2 and will add to this downward trend. Magoo.

I'm not sure if the bio data is normalized against the volume of effluent that comes from the storm drain water. We had that snowfall last Friday, and the snowmelt could have diluted the quantity of Viral RNA in the system.

I'm not trying to be a wet blanket here, just trying to ask a question.

Were that the case

Any major rain storm, which would produce a lot more runoff, would have resulted in greater dilution. We got less than an inch of liquid equivalent, and it did take a while for it to melt.

That said, it is an interesting question.

Digging around the MWRA site

I suspect that it is normalized for total flow volume, so that lower concentrations in high water volumes would be adjusted to get a standardized concentration reading.

But I don't know that for sure, so I'll continue to poke around.

That also doesn't adjust for those epic rainfall times - like last summer - when some of it went out the combined sewer overflows and into the rivers.

Its more interesting than that!

To both of you.

thanks a lot, pal

Now I have to worry about pepper mild mottled virus? What do I wear/inject/smear on/eat/shove up my keister to prevent this one?

You only need to worry

if you are a pepper plant. If so, I have more questions. This pandemic began and ends

This pandemic began and ends with a confusion about masks and testing at CDC.

...for a current poop report. Thanks!

this is crap data

I'm betting on a bounce

Or is it a "live Covid bounce"?

And why? Because that's roughly the frequency the numbers have been bouncing at for the past six months.

*Maybe* the huge surge (or the nature of Omicron itself) will disrupt the pattern, but I think we're likely to continue to see the oscillations. Probably has to do with small surges in subpopulations (social graph clusters) which then "burn out", before the next subpopulation is exposed.

So of course the first posting