Developer files plans for two life-sciences buildings in marine industrial park; says it will pay to move the actual marine companies now on the site 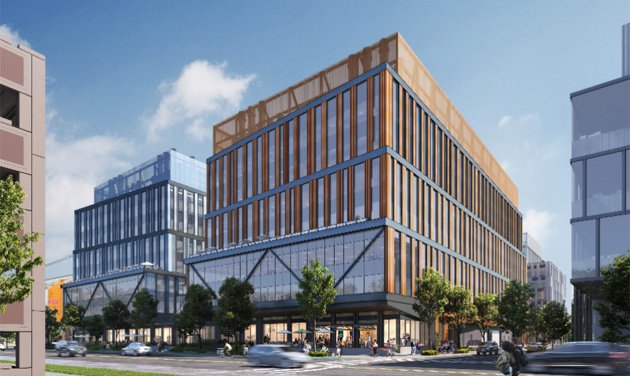 Looks just like the Seaport, but inspired by stacked shipping containers: Rendering by SGA.

Marcus Partners has filed plans with the BPDA for a two-building, seven-story life-sciences building in the Raymond Flynn Marine Park that will require the relocation of the seafood companies that now use the site, which will have a raised first floor to deal with rising sea levels and which is supposed to play homage to the stacked shipping containers and cranes across the Reserved Channel at the Conley Terminal.

In a filing with the BPDA, the developer - which has another marine-park life-sciences project in the works - says its 720,000-square-foot proposal for the "Parcel X" lot along Northern Avenue and Seafood Way, stretching to Fid Kennedy Avenue would help replace what it says is now a rather dumpy lot:

The Project aims to further activate the northeastern section of the Seaport District neighborhood, demonstrating how an industrial block with deteriorating pedestrian infrastructure and open space can be transformed into an exceptional and exemplary site with beautiful, comfortable, and accessible streetscapes, front doors on all sides to welcome visitors from all directions, and an inclusive, aptly programmed, and sustainable open space core. Details in the public realm will be responsive to its context, drawing influence from and making connections to the adjacent conditions.

Marcus will put up a new 36,000-square foot seafood processing facility across Fid Kennedy for two of the displaced companies.

The project ties in with plans by the BPDA to turn the marine industrial park, which it owns, into a sort of Kendall Square by the Sea, only under the constraint of state regulations that require most of the land to remain at least outfitted for actual sea-related uses, even though demand for such uses has been declining, in part because much of the marine park's jetties and docks need millions of dollars of repairs and upgrades, which the BPDA doesn't want to pay for.

Although in this case, Marcus will put up a new sea-based building, in other cases, the BPDA says developers can put up multi-story buildings in which the first floor is set aside for marine use, with the upper floors set aside for life sciences or offices.

To keep the area from becoming Kendall Square under the Sea, the BPDA has started a fund - into which building owners will put money - to build seawalls, tidal gates and other methods for beating back the tide. In its filing, Marcus says it will do its part with the design of the new buildings:

The proposed design addresses climate change with an elevated ground floor and public realm to protect these spaces from sea level rise and provide pedestrians in the neighborhood with emergency refuge during a storm event. Green infrastructure elements site-wide, such as shade trees and planting areas, will provide ecosystem services and mitigate the effects of extreme heat events and intense rainstorms.

I commented about the dropping of the word "INDUSTRIAL" from the now Ray Flynn Marine Park.
We are watching the gradual removal of marine industrial type businesses and seeing them replaced with other businesses that aren't even remotely related to what they are replacing.
We keep hearing about an inability to find marine type outfits to go in there. Given the easy big money that life sciences bring; I question how much effort is put into any ''search?''
I guess we didn't learn anything from the lack of manufacturing capabilities during COVID with the lack of domestically made ventilators. Maritime related businesses are essential and should be treated as such.
End of rant. Thank you.

They should be moving businesses out of this area that are not directly dependent on being on the shore line, and practicing managed retreat,

They should not be pouring money into building things that need immense measures to keep them dry and safe when those things don't yet exist, and do not need to be on the harbor.

Wow There sure ae a lot of

Wow There sure ae a lot of life sciences buildings coming to Boston. I wonder why that is?

Gun-toting music-video maker arrested at South Boston basketball court, police say
Car crushed, person injured when object plunges 16 stories from building under construction in the Seaport
More power woes in South Boston; Eversource brings in workers, generator
Squid to make way for apartments along West 2nd Street in South Boston
The dark night returns: Eversource grid in Boston flickers out across city
More life sciences proposed for marine industrial park, but with a twist: Some of it will actually be marine focused