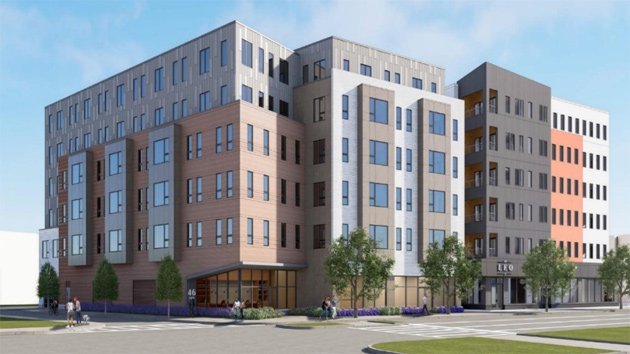 Rendering by Embarc, shows the separate Leo building, already under construction next door

A developer has filed plans to replace an old office building now used by State Police at 46 Leo Birmingham Parkway near Soldiers Field Road with a six-story apartment building, in an area in which offices are being replaced by residences at a rapid pace.

In its filing, Arx Urban says the proposed building would share resources with a "sister" building Arx is now putting up a mile away at 525 Lincoln St. to create an "active, immediate community" with "shared programming and events" and a community in which people who start out in the dorm-like "co-living" 525 Lincoln St. could move into a larger unit in the parkway building without having to pay a broker's fee. The application does not say if the company has its eyes on other properties to continue the progression to an assisted-living facility and then a nursing home.

The two buildings would also share a "building property management app" that would not only let them pay their rent online, but chat with their neighbors, Arx Urban says.

Seven of the units would be rented as affordable, for people making up to 70% of the Boston area median income.

State Police are scheduled to move out of the building - to which they had moved from the former MDC barracks at the Soldiers Field entrance that is now the Speedway - in 2023.

The building would have 13 car parking spaces and room for 50 bicycles, with 10 street-level spaces for visitors on bikes. Arx Urban says it is also looking at buying an electric car for the building that residents could use; it does not say if use would be included in the rent or if there would be an additional charge.

Across Birmingham Parkway, four buildings by three different developers with a total of 412 apartments and condos are proposed on Soldiers Field Place, off Soldiers Field Road, although two of the developers are currently wrangling in court over zoning variances their projects got.

There are additional projects either underway or proposed down Market Street into Brighton Center. Market Street itself intersects with Guest Street, which leads to still more development, both as part of the New Balance complex and by other developers towards the Allston line.

Nobody's allowed to own anything any more ever again!

Usually people get all angry

Usually people get all angry when a neighborhood gets more condos. Who's right?

Maybe we should just let more housing get built, since it's easier to change the legal structure of its ownership than to do the actual construction.

As far as the "community" of two buildings a mile apart, that's similar to and just as ridiculous as Harvard pretending the Allston engineering campus is an integral part of the existing Cambridge campus. The difference is that Harvard can force its students to travel to Allston for class if they want to meet their graduation requirements, while this developer can't make anyone trek the mile.

Much of the land in the area is owned by city of Boston and others, who lease the land to the building owners. Leased land = apartments, because you can’t sell something you don’t own, apparently.

Arx Urban says it is also

Arx Urban says it is also looking at buying an electric car for the building that residents could use; it does not say if use would be included in the rent or if there would be an additional charge.

Interesting idea. I think enabling people to live a day-to-day car free existence does ultimately involve making access to a car convenient on occasions where you really do need one. Zipcar was great for this but the high costs really only made it work out if your car-occasions were once or twice a month.

Burglars target MacBook Pros in Allston/Brighton break-ins; police tell residents, especially college students, to lock their doors and windows
Time to move the donuts across Cleveland Circle
No Freudian slip: Board approves new apartment building called the Sigmund off Soldiers Field Road in Brighton
New sign, who dis?
Oak Square gets some time in the roaster pan after power goes out
Some passengers on a Framingham-bound train forced a door open to escape after nearly two hours stuck with no AC in the sun in Brighton