BPS owes nothing to English High student who was shot in the back of the head by his drug-dealing Latin Kings school counselor, judge rules 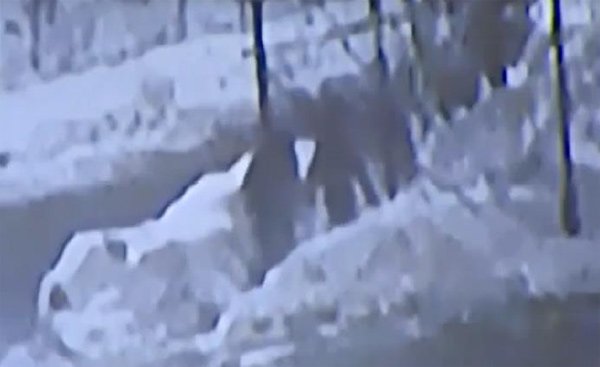 BPS not to blame for what Harrison, at the back of this line of people, would do moments later.

A federal judge today dismissed a former English High School student's suit against BPS for the injuries he suffered when a counselor at the school shot him in the back of the head and left him for dead on Magazine Street in Newmarket Square in 2015, saying that BPS did nothing that would have led to the attempted murder.

Luis Rodriguez's suit technically still continues against former counselor Shaun "Rev" Harrison because Harrison has already defaulted in the case, but a judge has yet to render a final decision. He is currently serving a long state sentence for the shooting and he awaits sentencing in federal court on a RICO charge related to his alleged membership in a local Latin Kings gang.

Harrison, whom federal investigators say was using English High students as marijuana salesmen to bolster revenue for his Devon Street Kings gang chapter, suspected Rodriguez, then 17, of stealing three "dime bags" from him, according to US District Court Judge Leo Sorokin's summary of the case. Harrison had recruited the student after he initially approached him about getting anger-management help, according to state court records.

After Rodriguez denied the allegation, Harrison sicced another one of his student drug runners to beat the sophomore up in a school restroom. The next day, March 3, 2015, Harrison, who lived on a side street off Mass. Ave. near Newmarket Square, asked Rodriguez to hang with him. The student, not realizing his attack had been ordered by Harrison, agreed. As they walked from the Newmarket Square Sunoco station down to Magazine Street, Harrison asked to borrow his phone to make a call and then, as Rodriguez started to walk again, in front of him on a sidewalk narrowed by snow left over from the year's blizzards, Harrison pulled out a gun and shot the student at short range, leaving him to die in the snow.

Sorokin had previously dismissed much of Rodriguez's suit against BPS because he and his attorney waited too long under state law to file it. In his ruling today, he dismissed the final count of the suit, that BPS was at least partly to blame for the shooting because school officials had no system in place to track Harrison's previous disciplinary problems.

Sorokin began by acknowledging that Rodriguez was the victim of "a terrible crime." But he continued that, to win a case against BPS, Rodriguez would have had to prove that BPS policies or actions led directly to his shooting, under a 1978 Supreme Court decision, and that was something Rodriguez could not do.

Sorokin said there was nothing in BPS policy that encouraged or led employees to harm students. And while BPS may have made mistakes in its handling of Harrison as he moved from school to school, including one instance in which he was told to never again throw a roll of tape at a student, BPS administrators at each instances at least tried to do something about his activities - even up to the day of the shooting, when an English High administrator called him in for a disciplinary hearing for angrily grabbing, spitting at and threatening a female student.

These BPS actions meant there was none of the "deliberate indifference" that would be required for ruling in favor of Rodriguez, the judge concluded.

The record establishes that BPS responded to each allegation, informed Harrison that his conduct was unacceptable, and took actions to discipline and correct him. ... BPS imposed both disciplinary and corrective measures. This response, even if inadequate, was not the "cause" of a violation of the Plaintiff's bodily integrity (the underlying constitutional violation for purposes of this motion).

Sorokin acknowledged that one top English High official later said that had she known about Harrison's problems at other schools, including the tape incident, she would not have hired him, and that neither English High nor BPS in general had a policy requiring officials to check prospective employees' records at other schools.

But, he continued, under the Supreme Court rules, Rodriguez would have had to prove that English either hired him despite knowing he would one day try to murder a student or that it made other, similar bad hiring decisions. But he could not, in part because Harrison got hired in part because school Headmaster Ligia Noriega-Murphy knew him from an earlier post, where she thought he'd performed well, and because he presented references - including from Boston Police, with whom he'd worked on a well publicized gun-buyback program in 2006.

The record simply did not suggest that a constitutional violation would occur or anything reasonably close to it. Indeed, the incidents of misconduct were years in the past and, as noted, addressed.

Sorokin gave Rodriguez two weeks to suggest how to deal with his case against Harrison personally. Although Harrison has yet to respond to the suit and he is in default, "the Plaintiff has not yet obtained judgment against Harrison," Sorokin wrote.

Harrison faces re-sentencing on the state charges on April 25. Last October, the Massachusetts Appeals Court upheld his conviction for the shooting, but ruled the judge in his case had erred in calculating his 23-to-26-year sentence. He has agreed to plead guilty on the Latin Kings RICO case in federal court; he faces a May 5 hearing on his plea agreement.

I know something, in addition to some-"one," at the school was way off. Something was very not right, even if it can't be proved legally. The truth does not have to be turned into blame in all cases, and even in the cases when blame can't be determined, there is still a need to look into the truth. Yes, I know people can have two faces. But you have to always look closely. You have to try at least.

Did the judge actually write

Did the judge actually write “dime backs” instead of dime bags?

Did the reporter actually mess that up? Yes. Fixed

Unvaccinated teachers, murdering counselors (I realize he didn’t kill him, but close enough), students knocking out their principal, etc. All these things for $1.4B dollars a year! We should be so grateful to have BPS.

If you have such great ideas on how to fix things, you should run for office.

Therefore my son will never set foot in a BPS because I can afford the best for him. Doesn’t mean I’m not annoyed/embarrassed that such a large portion of my tax dollars are going to such a embarrassment of a school system, and that I don’t empathize with parents that don’t have my means.

Like BPS not having a system that tracks disciplinary issues and complaints against teachers should be enough grounds for them to hold a bit of responsibility. They hired this man who essentially used his position to prey on then manipulate and recruit vulnerable teens to deal drugs, who he would shoot in the head over $30. Who knows how long that went on and under everyone’s noses. It even states at least one person knew of his assault history on students but they looked the other way. Very scary

Leo got this one wrong!

Leo, Please.... Your ruling covers the backsides of all those persons who hired, recommended or failed to act on protecting our children. Your ruling allows other wolves in sheep's clothing, that we send our children too daily expecting them to be kept safe, to prosper and perpartrate only god knows what other crimes upon.

I hope they throw the book at him, and then a roll of red tape.

Counselor should have taken the anger management course he recommended.

If only he'd aimed the gun at himself.

The most embarrassing school system in the country award yet?

Because I have plenty of BPS links to backup my claims.

The State of Texas?

How can the whole state win?

They pass laws like the one requiring a "balanced" discussion of the Holocaust and evolution. Also, the state board of education that dictates what books schools use, and makes damn sure that none of them say the civil war was about slavery, etc. etc. It's worse than you can imagine.

What is a 'balanced'

What is a 'balanced' discussion of the Holocaust?

To what law are you referring?

The law in question requires that teachers "present opposing views on controversial subjects." Its intent is to require that teachers present Holocaust denial, Creationism, Civil War 'not about slavery', and other reactionary ideas as reasonable.
Here's another law banning the teaching of Critical Race Theory.
[Edit:] That may be the same law as in the first link.

and that neither English High nor BPS in general had a policy requiring officials to check prospective employees' records at other schools.

What the actual hell???

You hire a teacher you call the principal at the old school and get the details. I would think this is standard HR for any job right? Wouldn't think you would need it in a policy but maybe you do.

That is in the normal world.

This is the BPS and it's not even close to being normal.