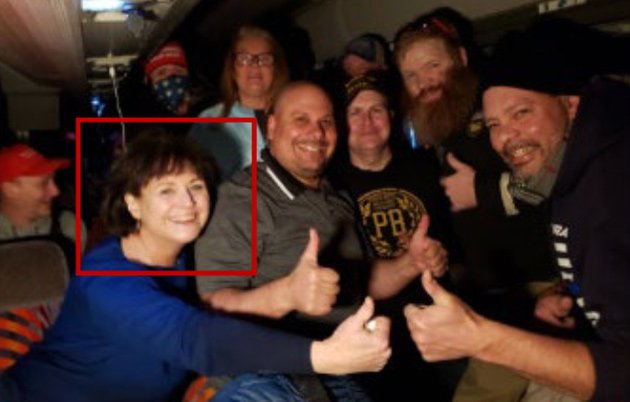 Ianni, thoughtfully outlined in red by prosecutors, in photo with her super happy and fun pals on a bus on the way to their failed coup. Next to her is Mark Sahady, who also faces charges.

Suzanne Ianni, the one-time Natick Town Meeting member who rode a bus down to DC and then partook in a hootin' and hollerin' coup de blah on Jan 6, was sentenced to two weeks and a day for her meandering and screaming where she shouldn't have.

Ianni, who helped organize buses to DC for fellow would-be Massachusetts putschists in the so-called "Super Happy Fun America" group, will also have to spend 2 1/2 years on probation and pay $500 towards the cost of restoring the Capitol after the rampage by oaf keepers and other Trump fanbois.

Federal prosecutors had urged Washington federal Judge Carl Nichols to put her away for a full month on her guilty plea to a charge of entering the Capitol, for several reasons:

Ianni led rioters in chants of "fight for Trump," while seeing rioters breaking doors and windows to gain access to the Capitol; (2) Ianni witnessed people who had been injured as they attempted to break into the Capitol; (3) when Ianni was finally able to enter the Capitol, she was part of a group that confronted and eventually overwhelmed police officers, allowing the group to move further into the Capitol; and (4) as of the time of this filing, Ianni has not expressed remorse for her actions on January 6.

Ianni's attorney, Henry Fasoldt of Boston, though, urged Nichols to keep her out of prison but to sentence her to a year of probation and 40 hours of community service:

Suzanne Ianni is devoted to her family, her community, and her country. She was raised to have an abiding respect for law enforcement, and has had no prior contacts with the criminal court system. Her compliance with community supervision for nearly two years while this case has remained pending reflects the law-abiding lifestyle to which she has returned and will maintain. ...

Ms. Ianni is a civic-minded, educated, and decent person. She made a significant error in judgment by entering the Capitol Building. This mistake, when balanced against her otherwise productive, loving, and meaningful life, does not square. She should suffer the consequences for such a transgression, but it must be proportional. The requested sentence – 1 year of probation, 40 hours of community service, and $500 of restitution – is just, humane, and consistent with sentences imposed against similarly situated defendants.

Also, compare some yelling inside the Capitol with what other Y'All Quaedists were doing, he urged Nichols. And she's just such a lovely, loving person, he continued - her father and grandfather both worked as state troopers and she gave up a career as an electrical engineer to raise her three children.

In addition to caring for her family, Ms. Ianni became involved in her neighborhood and local politics. She advocated for improvement projects such as road maintenance and local safety measures. From March 2019 until March 2022, she served as an unpaid town official.

Ianni has paid for her activities on 1/6, he wrote: Her marriage broke up, she wasn't re-elected as a Natick Town Meeting member and she suffered "damages to relationships with other people in her community."

Nichols then split the difference in his sentence.

She is so devoted to her

She is so devoted to her country that she tried to overthrow her country’s election and democracy and attacked her fellow countrymen. What a patriot!
Her father and grandfather were state troopers? I wouldn’t brag about being in a long line of racist criminal thugs to a jury but that’s just me.

I can't decide if I respect the schmuck who defended her for saying that out loud, or if I think he should be disbarred.

Christ, even Tsarnaev's attorney admitted straight up that he did it, and that she was only there to keep him from getting the death penalty.

The "Super Happy Fun America" group is an anti LGBTQ group and like with a group name like that who isn't a queen for a day?

"...she gave up a career as an electrical engineer to raise her three children." Also she gave up her career as a civil servant to support a lying ex-President. There was no election fraud tantamount to changing the results of the 2020 election for President.

No one in the Trump administration other than then President Trump himself believed there was. The few cases that have been found relating to any election fraud were committed by Republicans who were basically bringing out the graveyard vote.

Now she has a record of committing a Federal Offense. Good luck getting work with that on your resume Suzanne.

Not enough, but actually spending time behind bars will likely sober her up some, if that's possible. It would be better if it were, say, three months. Someone who is affiliated with Super Happy Fun America, who organized busloads of fellow insurrectionists, is not going to come to her senses and turn over a new leaf. The only thing to do is to keep her from harming others, and to do that she'd going to have to face some real consequences.

Best dam news of the week
One of the lesser eBay cyberterrorists sentenced to a year under home confinement
Two of the lesser eBay bloody-pig-mask stalker minions are sentenced; one gets a year in prison, the other gets a year of home confinement
Loathsome eBay executive gets nearly five years for role in bloody-pig-mask terror campaign against Natick couple
Putschy woman from Natick pleads guilty to milling about the Capitol and screaming on 1/6
Oh, dam: Natick tries to figure out whether to remove decrepit but scenic dam on the Charles River