Covid-19 rates escalating again and now there's monkeypox from Montreal, although that doesn't spread like Covid-19 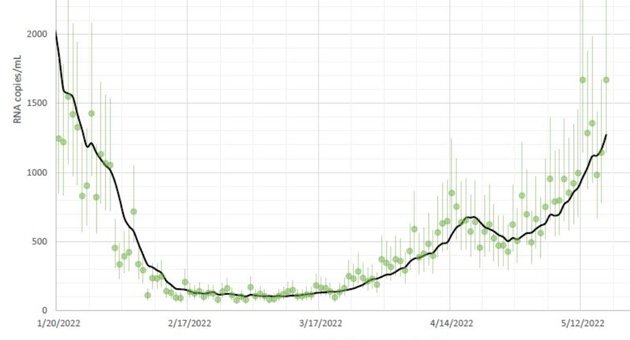 Latest Covid-19 viral counts from the northern half of the MWRA sewer district. Source.

In Boston, that means the rate is more than twice as high as the "threshold" level of 5% that once would have sounded all sorts of alarm bells, triggered anxious press conferences and led to more drastic measures than our current "yeah, a mask would be nice, but we can't tell you what to do" recommendations. The good news is that while hospitalization rates statewide continue to rise, at least in Boston, the numbers of people coming into ERs or getting put into beds - in particular ICU beds - remains below the city "thresholds" for doing more serious anti-virus stuff, like requiring masks indoors or proof of vaccination.

Meanwhile, the numbers from the Deer Island treatment plant continue to suggest rates will only keep climbing - the data from sewage flowing in from the MWRA's greater-Boston sewage network have become a basic predictor of where actual Covid-19 numbers will be seven to ten days out.

But you didn't read down this far to bone up on Covid-19 viral products flowing through Boston-area sewers - you want to know what's up with monkeypox.

Yes, the state Department of Public Health reported today that a Massachusetts man back from a trip to Canada has been diagnosed with the US's first case of monkeypox in 2022.

it's a virus in the same family as smallpox and cowpox and so has similar symptoms - it starts with flu-like symptoms that can progress to a rash of pus-filled sores. One difference with smallpox: Monkeypox causes the lymph nodes to swell, while smallpox doesn't.

The man is currently hospitalized but in good condition, DPH says, adding investigators are tracing his contacts since he returned to the state and that "the case poses no risk to the public."

The state declined to narrow down where in Massachusetts the man lives or where in Canada he visited. The CBC, however, reports on a monkeypox outbreak in Montreal that has been linked to an American case - of which ours is the only one so far - as well as to cases in people in Europe.

Fortunately, DPH says, monkeypox is very rare in the US:

The virus does not spread easily between people; transmission can occur through contact with body fluids, monkeypox sores, items that have been contaminated with fluids or sores (clothing, bedding, etc.), or through respiratory droplets following prolonged face-to-face contact.

The state says people who should be on the lookout for symptoms are those who have traveled somewhere that has had confirmed or suspected cases of monkeypox, has had contact with somebody diagnosed with monkeypox or, because recent cases in Britain have been spread through men having sex with each other, men who have sexual contact with other men.

having sex with monkeys is not such a good idea either. You might give them Covid.

Couldn't hurt. Unless the

Couldn't hurt. Unless the monkeys started hurting people. . . which they almost certainly would.

Once winter comes, the gorillas will simply freeze to death

Wait, which one causes the lymph nodes to swell?

One difference with smallpox: It causes the lymph nodes to swell, while smallpox doesn't.

Asking for a friend :)

Geezers got their vax

There is apparently some crossover immunity from being over 50 and having had a smallpox vaccination.

Which is why this is picking up steam now. The majority of the population has not been vaccinated since Smallpox was eradicated.