Boat owner blames passengers for own injuries, death after he crashes into harbor marker; also blames another boat owner and the marker itself; Coast Guard demands he pay for repairs 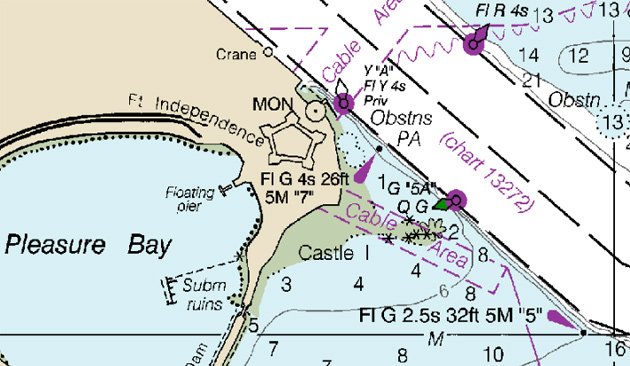 Navigational chart of harbor near Castle Island. Marker 5 is lower right, next to the "5". Source.

The legal maelstrom over a boat that crashed into a large navigational tower in Boston Harbor last July, leaving one woman drowned and several people injured, has expanded considerably over the past couple of months.

At the center of the legal battles, playing out in filings in US District Court in Boston, is a ruling in November by Judge Allison Burroughs to at least provisionally limit Denver's maximum potential liability in lawsuits over the crash to $50,000. That amount is what Denver claims is the value of what's left of the Make It Go Away, which now sits at a State Police dock as evidence for the criminal case the Suffolk County District Attorney's office is separately bringing against him.

Burroughs issued her ruling under an 1851 "limitation of liability" law, originally intended to protect the owners of ships unexpectedly set upon by pirates or destroyed by storms on the open seas, which limits the liability of ship owners in lawsuits to the value of the ship after an incident, rather than the potential value of whatever the ship carried.

Both the passengers and the federal government, however, have filed briefs explaining why Burroughs should lift the limit in this case. Denver, has responded with rebuttals that blame everybody and everything but himself for what happened around 2:50 a.m. just off Castle Island as Denver and his guests were returning from an excursion from the Seaport to Quincy in his 38-foot speedboat, which he had purchased just months earlier, and which he normally moored near the $2.4-million Fan Pier condo he bought in 2020, with proceeds from running a New Hampshire demolition company.

Arguments by the people on the boat or their parents

In both a joint filing and individual claims, four of the passengers and Julce's parents say the "limitation of liability" law only applies to ship owners who had no knowledge or "privity" of an incident at sea. In contrast, they say, Denver himself readily admits he was behind the wheel of the Make It Go Away when it crashed - and not only that, but Denver was, in the words of a complaint by passenger Aristide Lex, "unfit, incompetent, ill experienced and untrained," and was captaining a boat that was "unnecessarily overpowered" for basically cruising around the harbor: A speedboat with three engines generating 900 total horsepower.

They point to a 1998 ruling in federal court in Boston that made that point in a similar case - a passenger of a boat was injured when the owner, behind the wheel, crashed his boat - and to an 1895 Supreme Court ruling in the case of a steamer called the Oregon, which crashed into another ship one night, sinking it. They say this case established the principle that the captain of a moving ship is presumed to be at fault for crashing into a stationary object absent strong proof otherwise.

In both his original limitation request and replies to these complaints, Denver has argued he is completely blameless. He says he didn't hit the marker on his way out of Boston Harbor towards Quincy and he followed his navigational system's track of that path exactly on the way back - he has not explained how he would have wound up crashing into the marker, a 40-foot structure permanently affixed to the bottom of the harbor, if this were, in fact, the case.

However, he has also argued that he could not see the marker partly because its lower supports have no reflective material on them, partly because spotlights from two nearby dredgers digging out a harbor channel overwhelmed the flashing green light at the top of the marker, which is in place to keep large ships away from the shallower waters of Dorchester Bay.

In a separate filing, one of the passengers, Musse Kassa, asserts Denver hit the marker because, among other reasons, he "operated the vessel while intoxicated and/or under the influence of drugs in violation of local, state and federal laws." Also, he was going too fast and driving the boat erratically, Kassa charges.

Lex said that because of the crash, he suffered "a fractured jaw, permanent scarring and psychological injuries."

Julce, a Somerville resident, was 27, a finance major at UMass Boston and an active participant in the Somerville dance scene when she died.

In his own filings attempting to uphold his liability limitation, Denver goes further than just holding himself blameless: He blames the victims themselves, including Julce, for what happened to them.

For the people who survived, he claims they were drunk or drugged up and that's not his fault and that their "own intentional actions" led to their injuries. For Julce in particular, he alleges:

Decedent's death was caused by her own intentional actions and for which Limitation Plaintiff is not responsible. ...

Decedent's death was due in whole or in part from a known and open and obvious condition.

Decedent's death was due to her consumption of alcohol and/or drugs.

But even with all those assertions, Denver also blames the operator of another boat for her death.

Denver charges that Lee Rosenthal of Beverly, who also owns a boat and who Denver alleges was also cruising in the harbor at the time off the crash, spotted the wreckage, circled the crash survivors, then sped off, in violation of maritime law. That, Denver alleges, means Rosenthal is also to blame and so has asked Burroughs to add him to the case, on the theory that should she rule against Denver and drop the $50,000 lawsuit limitation, then Rosenthal should be made to share the legal and financial burden.

In his formal complaint against Rosenthal, Denver alleges that Julce would have lived had Rosenthal and his two passengers stayed to help the survivors out of the water.

Denver alleges he actually began swimming towards the man's boat - with illumination from a spotlight on a nearby tugboat, which could not come close enough to rescue the people in the water because of the relative shallowness of the harbor at that point:

At this point, without notice, Rosenthal's vessel departed the scene at a high rate of speed and failed to provide any assistance to Denver and the seven (7) passengers, who were either in the water, or holding on to the wreckage, or Daymarker # 5.

Passengers on Rosenthal's vessel were heard yelling at Rosenthal as he left the scene with the vessel's fish door still open: "What the hell are you doing?"

Jeanica Julce would not have died but for Rosenthal's negligence, recklessness and callous indifference in failing to provide aid and assistance.

The Claimants would not have suffered their alleged pain, severe anxiety, mental and emotional suffering, including damages related to fear of drowning, as alleged in their Claims, but for Rosenthal's negligence, recklessness and callous indifference in failing to provide aid and assistance.

As a result of Rosenthal's conduct, Claimants allegedly suffered damages, including but not limited to Jeanica Julce's death and alleged physical injuries, and severe emotional and mental distress. If Claimants are entitled to recover against Denver, then Denver is entitled to contribution from Rosenthal for all damages he may be required to pay the Claimants, and for costs, expenses, and fees incurred in defense of this action.

Rosenthal filed his rebuttal this week, asking that the claim against him be dropped completely because Denver "had privity and knowledge making him personally liable for the accident at issue in this case," that Denver's the one who crashed his own boat and that all the injuries and Julce's death stem from whatever happened on that boat, not whatever Rosenthal did. Privity and knowledge is a maritime-law phrase, related to the 1851 law, that basically holds the limitation of liability does not apply to boat owners who knew what was going to happen to their boat, for example, by being at the helm when whatever happened happened. Also:

The Petition and Third-Party Complaint should be dismissed because the cause of any wrongful death, injuries and loss was caused by the Petitioner and/or other persons for whom this defendant is not legally liable or responsible. ...

Third-Party Defendant cannot be liable in contribution because it did not join in the wrongful conduct that directly and proximately caused the fatal accident or any injuries.

Representing the Coast Guard, which owns Day Marker 5, the US Attorney's office in Boston argues its claim for $300,000 for repairs is exempted from the limitation-of-liability law by the Rivers and Harbors Act of 1899, which covers damages to publicly owned structures in navigable waterways, and asks Burroughs to make Denver pay up for the repairs.

The government also asks that it be allowed to hire its own boat appraiser to see if Denver's post-crash boat really is only worth $50,000. Denver has not said in court filings just how much he paid for the new Pursuit DC 365 he bought early last year, but the manufacturer lists a starting price of $620,255, without options.

Day Marker 5, during the day, as seen from Castle Island: 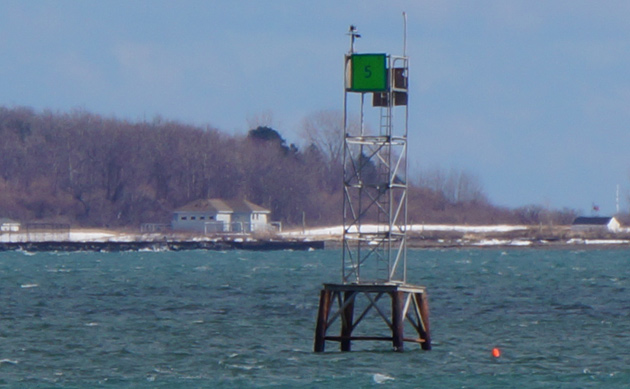 I wonder who or what Rosenthal had on board, eh?

I suppose also he has a right to be completely incompetent. This must have occurred to him.

This whole thing is sad. People just looking to get theirs with no regard for the consequences of their actions. They belong with their mouths on Putin's fetid tits.

Thanks for the update on this case, nice scoop.

Incredible amount of legal maneuvering going on with this tragedy, which up until now has not been reported anywhere, as far as I can remember. And the irony of the boat's name, Make It Go Away, coupled with the boat owner's legal stance is almost too much.

"this case established the

We put our best legal minds on this.

Not much common sense among these people

Denver's arguments are all over the place. Rosenthal acted like a jerk and deserves some punishment too. There's no way Denver should be able to buy his way out of this, but I fear that he will.

How much of this lawsuit is

How much of this lawsuit is being driven by insurance companies?

Insurance companies have no problem jumping into lawsuits ...

But in this case, so far, it's all between the people on the boat who feel they are owed more than $50,000 in restitution, Denvers and the owner of the other boat.

Not a “day marker”. Day markers don’t have lights. #5 light has a light.

Other than that, pretty good. Thanks!

7 not so lucky for South Boston commuters
Broken Coconut, broken promises: The cases against Aaron Sells
Putting the 'sea' in Seaport photos
Final tally in that South Boston condo: Remains of four infants recovered
Out of control Gen Zers and teens recklessly careening down the streets of South Boston in Stop and Shop carriages, outraged councilors say
Additional human remains may have been found at South Boston house where a dead baby was found in a freezer yesterday