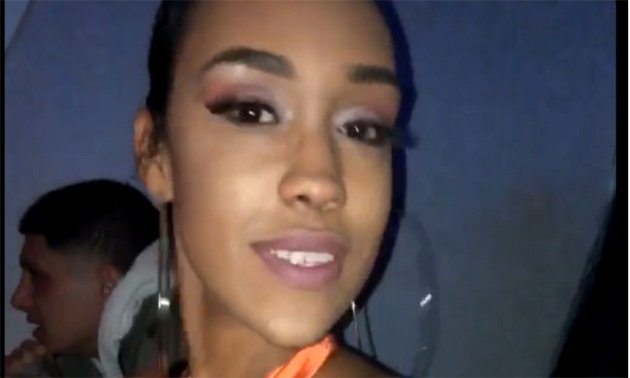 Correia in photo taken the night she died.

A federal judge today sentencing Louis Coleman, 36, of Providence, to life in prison without the possibility of parole for kidnapping Jassy Correia in the Theater District early on Feb. 24, 2019, raping her and then strangling her to death, the US Attorney's office in Boston reports.

A jury had convicted Coleman on June 1 on a federal charge of kidnapping resulting in death.

In a recommendation to the judge for life without parole, prosecutors first described Correia:

Jassy was 22 years old at her death; she would have turned 23 on February 26, 2019. She was a beloved daughter, granddaughter, sister, mother, and friend. Jassy moved to the United States from Cape Verde as a young child. Her mother fought to give her that opportunity and dreamed of a better life for Jassy here. To lose her this way has devastated her family.

Just prior to her kidnapping and murder, Jassy was living in an apartment in Lynn with her two-year-old daughter. She had a social worker helping her make plans for her future. She was working part-time at Del Frisco's restaurant in the Seaport neighborhood of Boston and had another job interview lined up for Monday, February 25, for a job closer to her home. She was working on getting her daughter into a day care near her home too. Although she was a survivor of domestic violence and had experienced poverty, life for Jassy was looking up. She made plans in a notepad with the words "Life Is My Favorite Adventure" on the cover. Inside she tracked her budget, made to-do lists ("Apply for jobs in person"; "Go see family"; "Take the test at least once. Fail or pass."; "FIND A NEW JOB!"), and listed possible avenues for locating long- term housing. Either she or a friend had also written in the notepad words of encouragement and positivity: "YOU GOT THIS," "CAN DO IT," and "#thrive."

Her 23rd birthday was coming up, and Jassy made plans with a friend from western Massachusetts, Aja, to go to a club on the evening of February 23 to 24, 2019 to celebrate Jassy's upcoming birthday. Jassy arranged for her daughter's paternal grandmother to care for her daughter.

In a statement, First Assistant US Attorney Joshua Levy said:

Jassy Correia was a vibrant and beautiful 22-year-old woman and mother of a toddler daughter. Louis Coleman, a total stranger to her, abducted her, raped her and strangled her to death. The pain and suffering Louis Coleman inflicted on Jassy Correia that night and her loving family – her mother, her father, her brother and so many others every single day since Feb. 24, 2019 – will never be relieved by this sentence. By his depravity and his horrific disregard for Ms. Correia’s life, Louis Coleman forfeited his right to live free in society. To this day, Louis Coleman has shown no remorse. After he lured 22-year-old Ms. Correia into his car, sexually assaulted her and violently killed her, Louis Coleman did not once consider turning himself in – rather he concocted a gruesome plan to conceal the assault and murder he just committed. Today’s sentence of life in prison is a just punishment. Our office is incredibly grateful for the courage of Jassy Correia’s family.

Proscutors showed that Corriea had gone with a friend to Venu that night. At closing time, when she had trouble getting a ride-share car to pick her up, Coleman, who himself had gone to the club that night, noticed, then pulled over and offered her a ride. Based on cell-phone records for his Android phone, investigators say Coleman pulled over on Tremont Street, near Aguadilla Street, in the South end and parked for 12 minutes, then took off for Providence via I-93 and I-95. By the time he crossed the state line, they say, Correia was dead.

Surveillance footage from Coleman’s Providence apartment building showed Coleman, at about 4:15 a.m. on Sunday, Feb. 24, 2019, parking and exiting the vehicle, and then returning a short time later carrying a blanket. He then walked from the car to the front of the building carrying the Ms. Correia’s lifeless body over his shoulder. Once he entered the building, surveillance video showed Coleman dragging her towards the elevator and subsequently towards his apartment.

In the days that followed, Coleman visited two car washes and his internet search history reveled that he Googled things such as "how to pull a tooth out that's not loose;" "can a person fit inside a suitcase;" "buy dumpster;" "oil barrel;" "how to clean for embalming;" "turkey baster;" and "target sanitizing bleach." In addition, Coleman purchased a $150 air purifier, 36 pounds of baking soda, duct tape, 50-gallon trash bags, personal protective equipment including full-body coveralls, an odor respirator, protective masks, safety goggles, a 600-lb rated dolly, three Tyvek suits and a large suitcase.

At 1:15 a.m., on Feb. 28, 2019, Coleman wheeled a suitcase containing the victim's body out of his apartment and into the parking lot where his vehicle was parked. Coleman struggled to lift the suitcase containing Ms. Correia's body into the trunk of his car, before driving away at 4 a.m.

On the afternoon of Feb. 28, 2019, Coleman's vehicle was stopped by Delaware authorities on Interstate 95 South near Wilmington, Del. Officers ordered Coleman out of the vehicle and asked him if anyone else was in the vehicle with him, to which Coleman replied, "She's in the trunk."

Officers discovered the Ms. Correia's body in the trunk of Coleman's vehicle, bound with duct tape and in the fetal position inside a sofa cushion cover, which was inside of a black trash bag, stuffed inside the suitcase Coleman was seen bringing into his apartment on Feb. 27, 2019. Police also recovered a duffle bag, a pair of new long-handled loppers, plastic garbage bags, clothing, a red plastic gas container, a green butane lighter, black gloves, charcoal air purifiers, air fresheners, tinted safety glasses, plastic bags, work towels, cloth work-gloves, a new set of DeWalt pliers, a laptop, the computer hard-drive/tower he used to conduct his Google searches and disinfectant from the vehicle.

Just that description of the events given here was absolutely terrifying.

It must have seemed like being in hell serving as a juror at that trial. God bless her family and keep them safe.

Man charged with raping woman at Chinatown hotel, holding her there for ransom
Man charged with punching two Asian-American women in the face in Boston; was already locked up for attack on elderly woman in Cambridge
Man robs Chinatown bank with a spray bottle, police say
Masshole parks in bus stop, bus pulls up ahead to let off passenger in wheelchair, Masshole can't wait, drives over wheelchair ramp, police say
Beaming at Chinatown's newest school, now under construction
Man who was shot outside Theater District hotel has died